When the boyf and I were in Cann River we came across these beautiful chopping boards made from local hardwood and bought one for home and one for traveling (they weigh a ton!). 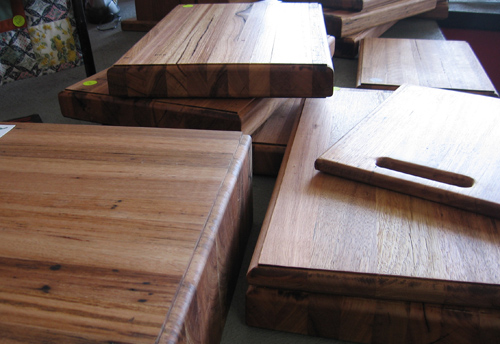 Boyf contacted the guy who makes them and got this response:

Thankyou for purchasing our cutting boards at Cann River Cafe.  The timber used in these boards is local native hardwood, predominantly the species Eucalyptus Sieberi (common name Silvertop) with on occassion other species such as cuttail, brown stringy or even messmate included.  Garry also makes a board which is southern mahogany (now renamed Snowy River Red Gum) and silvertop.  Garry was the first sawmiller in East Gippsland to specialise in silvertop and has been in the industry since childhood as his father and three uncles started milling in May 1952.
There is so much I could tell you on the positive side of the industry but I do not know just what you would like.  Garry loves the local, in fact all Australian hardwoods and would do just about anything within reason to promote the beauty and uniqueness of our superb native timbers. His love of our native timber goes far beyond simply making a living.
The boards you purchased are coated with a non toxic oil but can be reoiled on a need basis with any vegetable or cooking oil, e.g. olive oil, grapeseed or canola oil.  If the boards become scratched through use (Ihave been using my board for over ten years now), they may be lightly sand with a fine grit wet and dry paper then reoiled.  Enjoy your board.

And in further correspondence:

I am Garry’s wife and our surname is spelt BROWNLIE.  Up until March 2009 there was a sawmill run by my husband known as G.J. Brownlie of Brownlies Sawmill Noorinbee North, but unfortunately due to problems with VicForests and the Labor Government we were forced to close due to lack of supply in March 2009.  Garry in the three years prior to that had been working on developing a hardwood furniture factory in Cann River as the ultimate form of value adding to the hardwood timber milled.  This along with the mill was also forced to close leaving eight workers without a job.  Some of the timber he is using for the boards is actually timber “saved” over many years in the sawmill as he refused to sell beautiful timber to the pallet material buyers and Brownlie’s has never owned a chipper as Garry and his father Gordon before him believed in getting the most timber possible out of the logs delivered.  Brownlie’s were also renowned for quality timber and my husband offered a very personal service to his customers, selling timber not only to timber yards but also to the general public and encouraged people to use Australian timbers rather than imported timbers, many of which are non-sustainably logged.  Another point that may be of interest to you is the fact that since 1952 Brownlie Sawmill has only ever taken from our native forests enough timber to make a living, not millions by any means, and has endeavoured to use the timber wisely.  Since Garry took control of the mill in 1992 from his father he has, even though he was one of the smallest sawmills in East Gippsland been a leader in value adding to the timber, having the first purchased timber kiln east of Bairnsdale, fought for species specific since 1995 and endeavoured to value add to the highest levels.  He has supplied furniture grade boards, flooring. overlay flooring, decking boards, both exterior and interior cladding/lining boards and even now though he has been forced from his business as a sawmiller he is still buying green timber in, kiln drying it and sending it off as overlay flooring.  Some boards he is still using to make furniture and his chopping boards.

Great to come across such people.