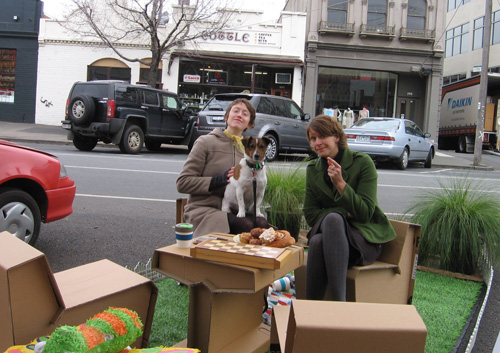 Friday was PARKing Day. As Grist puts it:

On PARK(ing) Day — which this year is today, Sept. 17 — that changes, if only for a few hours. In some 140 cities around the planet, humans take back some of the parking spaces and use them to create mini parks, where they play games, do art projects, or just sit and chat.

PARK(ing) Day began in 2005, when a group called Rebar set down some sod, a bench, and a tree in one space in San Francisco for two hours, as long as the meter would allow. Their mission: “To call attention to the need for more urban open space, to generate critical debate around how public space is created and allocated, and to improve the quality of urban human habitat … at least until the meter runs out!”