AN INTERVIEW WITH JOHN KOVALESKI AND HIS SON 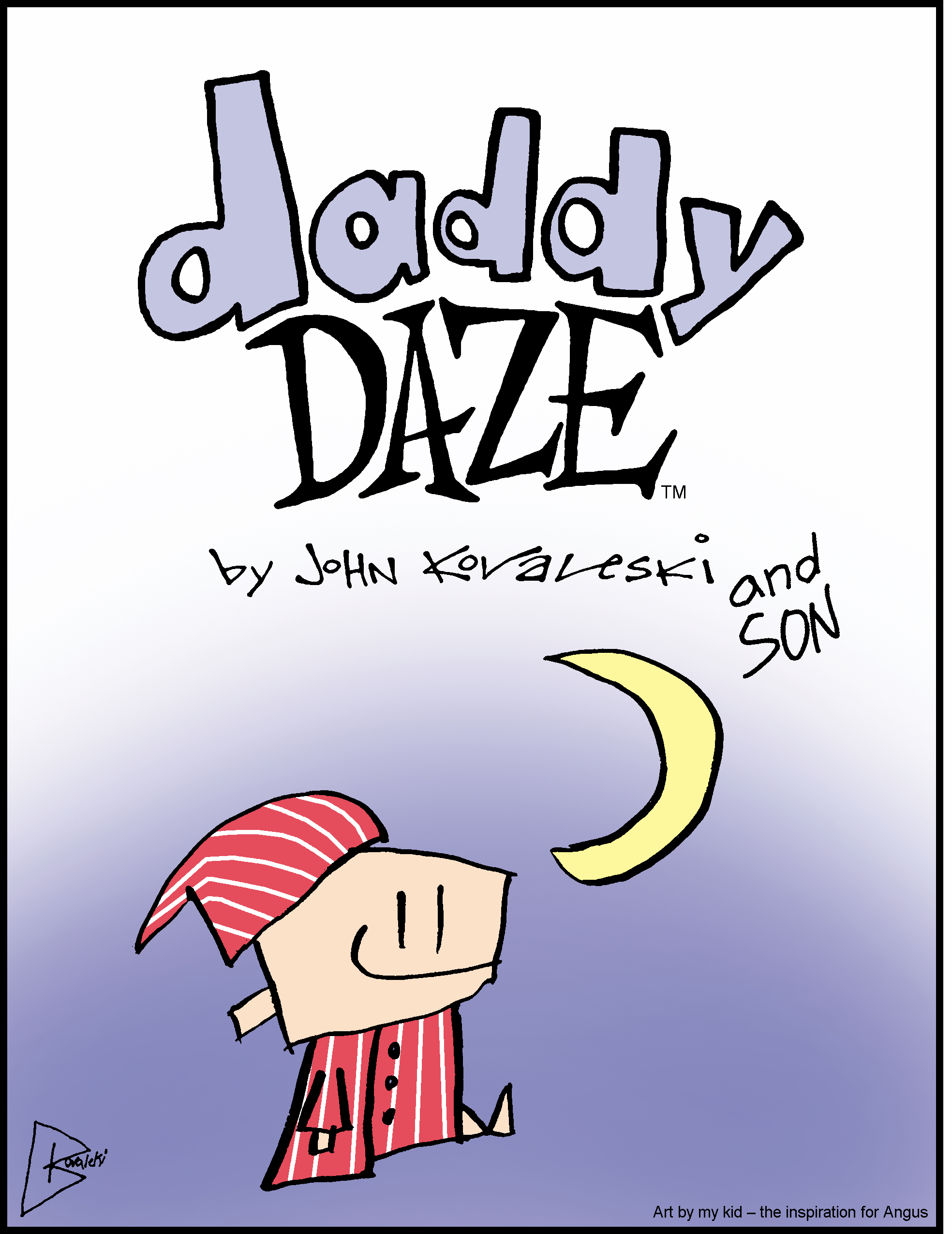 Father's Day is coming up this weekend! To celebrate, we sat down with John Kovaleski, creator of Daddy Daze, and his son for a special chat.

Daddy Daze began on Father's Day 2018, making this weekend its 3rd anniversary. The strip follow the lives of a single father, Paul, and his son Angus, as well as all of their wonderous adventures and quirky and imaginative scenarios they partake in. Kovalseki's 10-year-old son Ben has recently started drawing title panels for the strip's Sunday pages.

Fatherhood, of course, is a major theme in the strip, so what better way to celebrate this weekend's major holiday than to have a conversation with Comics Kingdom's top dad and his son?? Read on to see what they had to say about their unique father-son working relationship!

HOW DID YOU GET STARTED WITH ART? WHAT INSPIRED YOU TO BECOME A CARTOONIST?
I always drew as a kid. I’m pretty sure my path was watching cartoons on TV, then realizing that there were comics in the newspapers. At that point, I wanted to have a comic strip – to be able to write and draw.

HOW DID THE IDEA FOR DADDY DAZE COME ABOUT?
I was in my MFA program when my son, Ben, was born. As part of my graduate work I did a weekly comic strip about the real-life adventures of being a first-time dad. There was no gag writing – it was all funny stuff that happened. Unsurprisingly, some comics had to do with bodily functions. It was a few years later that I fictionalized it and it became Daddy Daze.

WHAT’S IT LIKE WORKING ON THE STRIP AS YOUR SON GROWS OLDER? DO YOUR IDEAS CONTINUE TO COME NATURALLY?
It hasn’t changed much. Although it’s about an infant and his dad, their interactions are beyond Angus’s age. There’s lots of questions, a constant interaction. And that’s something that continues as Ben gets older.

As for the ideas, they don’t come naturally for me. I have to specifically sit and think and let my mind wonder. If something seems like an idea that might work, I’ll write it in my phone to come back to later and try to build it into a gag. Right now, I have the word “periscope” in my phone and I’m trying to do something with Angus using it to see how he would see the world when he gets older and taller. Come to think of it, Ben does talk a lot about how tall he’s going to be.

HOW HAS YOUR SON REACTED TO THE STRIP?
He loves it and loves being in it. When he was about 7, I was explaining a gag to him by saying, “the dad did this and then the baby did that” he said, “Daddy, just say ‘you’ and ‘me.’” He takes a lot of pride in it. I was at a local comic con and I was giving out comics pages from my local paper, signed with a drawing of Angus. Ben was with me and he signed them too.

SO BEN DRAWS FOR THE SUNDAY TITLE PANELS. WHAT’S THE FATHER-SON WORKING RELATIONSHIP LIKE? DO YOU LET HIM DRAW WHATEVER HE WANTS OR DO YOU PLAN IT OUT WITH HIM?
I have Ben read the finished Sunday comic, and then we’ll both come up with ideas. And, yes, we do butt heads sometimes about what to draw and how to draw it. He’ll then draw it in pencil and I’ll look at it to see it any changes need to be made before he inks it. Sometimes he colors it on the computer. But if I’m up against a deadline, I’ll color it.

WILL WE EVER GET TO SEE WHAT ANGUS WILL LOOK LIKE ALL GROWN UP?
I did do a series of strips with Paul dreaming about Angus as a teenage, but was still in his crib and still talking in “ba’s." I don’t think I’ll ever have him actually get older, though.

THE NEXT FEW QUESTIONS ARE FOR YOUR SON! BEN, WHEN DID YOU START DRAWING AND WHAT MADE YOU LIKE IT SO MUCH?
I’ve been drawing my whole life. I like being able to “art” because it's fun. I like seeing the end result.

WHEN AND HOW DID YOU START DRAWING THE TITLE PANELS FOR DADDY DAZE?
I started drawing it in October and they started running in November. One time I said I wanted to contributed to the strip and I said I can do the drop panels because it’s only once a week.

(John: I had suggested this a few times since the strip began, but Ben wasn’t up for it yet.)

DO YOU SEE SOME OF ANGUS’S CHARACTER IN YOURSELF?
Yeah, because I am Angus. He’s based on me. I feel like Angus has the same mentality to his dad as I have to my dad. The stereotype is that kids are always embarrassed by their parents. That’s not me. I’m only sometimes embarrassed my parent. We make jokes the same way as in the comic strip. We make jokes about everything. The strip used to be about real life, then Dad stopped doing real life and started making up the jokes. We could probably do the real thing now because of the amount of jokes we make in real life. A few of the jokes he uses are from us.

IS ART A PROFESSION YOU’D LIKE TO PURSUE WHEN YOU GROW UP OR DO YOU HAVE OTHER ASPIRATIONS?
Art is Plan B or C for me because I’m a drummer. I have been one my whole life. I’d like to do anything that could be a profession in drumming.

BACK TO JOHN. WHAT DO YOU TYPICALLY ENJOY DOING ON FATHER’S DAY? GOT ANY MAJOR PLANS FOR THIS UPCOMING ONE?
No big plans. I’ll wake up with Ben and hang out with him for part of the day, and then head out on my annual quest – to find Daddy Daze in the Sunday comics. I don’t get to see that locally, so I’ll drive about an hour to pick up a newspaper, then go to a few bookstores. I’m a thrillseeker.

Follow John on Facebook, Instagram and Twitter. Don't forget to also check out Daddy Daze right here on Comics Kingdom! And of course, to all dads out there, have a very happy Father's Day.