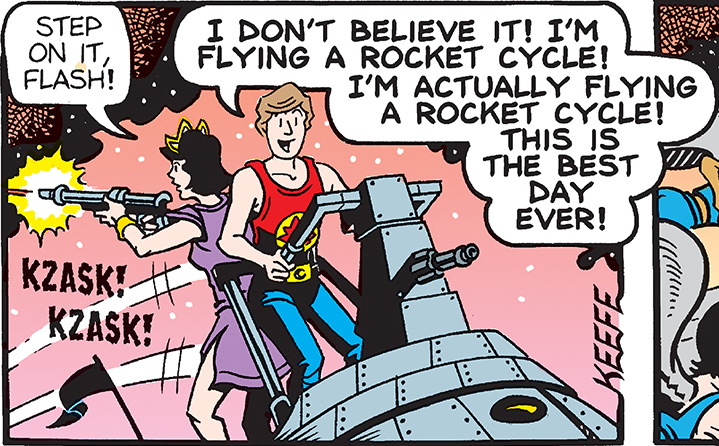 Yesterday was Father’s Day, and a lot of dads got some pretty neat presents. One such dad was Ted Forth, who received a hand-drawn strip by his daughter Hilary. In it, Mr. Forth is depicted as Flash Gordon saving Earth from an alien invasion.

“It’s the best Father’s Day present I ever got,” exclaimed Forth. “I’m flying a rocket cycle over Mingo City, getting chased by hawkpeople, and the fact that my mother-in-law gets to be Ming The Merciless makes the experience feel even more heroic!” His wife, Sally Forth, would not comment; according to their daughter, Hilary, she is simply too “embarrassed.” “Honestly, I’d feel the same way too if he started suggesting going to a comic con and doing some sci-fi LARPING afterward, not to mention there’s a whole news crew here to record all of this. Also … I just realized I said all of this on-record.”

Sources have confirmed that his fanboy daydreaming has been continuing today. “We wake up to the sounds of ‘WEEEEE’ and ‘PEW PEW’ every morning,” claims one of the neighbors, who wishes to remain anonymous. “Someone please just get that man to Disneyland … actually, wait, that would probably make things worse.”