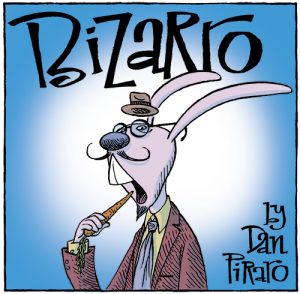 (For an embiggened version of this image, click a laundry basket.)

This is one of those cartoons that is meant to be more editorial than funny. In one way, it serves to point out that women in modern societies typically have it better than they did 150 years ago. But is that actually true? Women used to work their fingers to the bone at home with no option to compete in the marketplace; they were essentially private slaves with little or no recourse to protect themselves from the men who “owned” them.

Today, most women have to compete in the marketplace to make ends meet, but are still required to do more at home than their male partners. Single mothers routinely have to handle everything at home and compete in the workplace. And, to add insult to injury, they typically don’t make as much money as men do for the same work, and haven’t nearly as much opportunity for promotion. And while they have more legal protection from spousal abuse than they used to, those in power continue to abuse and harass women with little or no legal consequence. We have such men in the White House, in Congress, and on the Supreme Court.

The upcoming elections in the U.S. are an enormous milestone for women. The current Republican Party has consistently shown no respect or compassion for women; it is a matter of record. They have shown no interest in even pretending to court the female vote and have run on platforms clearly meant to benefit only white males. Will the voters do anything about it? If you are anything other than a white male, your vote could change history in a positive way. Do it.

If you are a white male, as I am, I encourage you to muster up enough foresight to vote against your unfair advantage and for a more level playing field. I’ve already voted and hope you will, too.

For a welcome change of topic, let’s see what Wayno has been creating with his do-it-yourself cartoon kit this week… 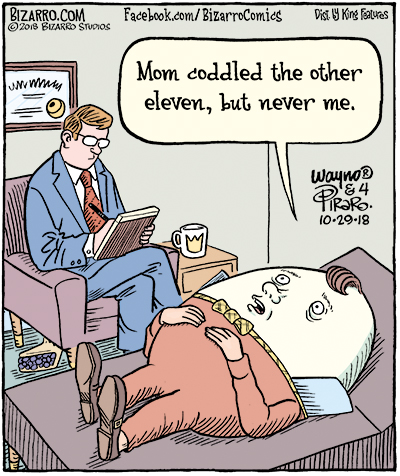 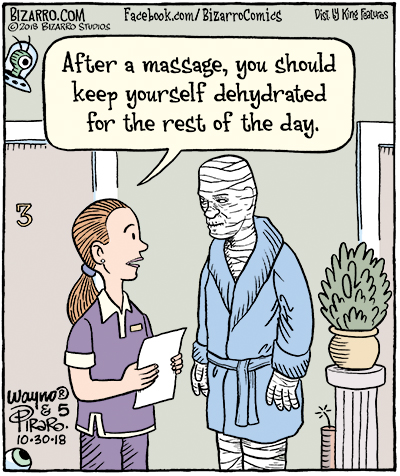 This mummy character is modeled after Boris Karloff in the 1932 horror film. I used to laugh at movies about mummies because they walked so slowly there was no way you could get caught unless your shoes were covered in warm tar or you got your hand caught in a vending machine. I attributed the popularity of mummy movies to the relative unsophistication of audiences from the era, but now we have zombies who walk as slowly as my great aunt after foot surgery and millions of viewers are running in terror. As the saying goes, “Those who do not learn from history are destined to repeat it.” 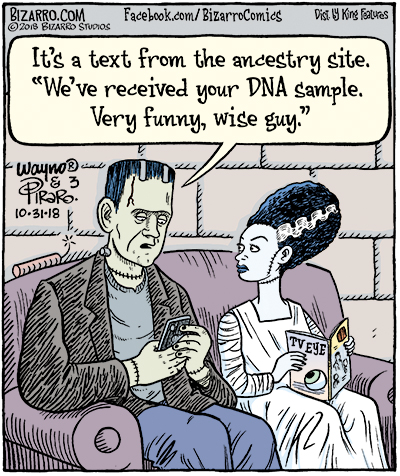 It was a Halloweeny week so Wayno threw another monster gag into the recipe. In his weekly blog post, he mentions an important anniversary for the flat-headed monster featured above. I encourage you to check it out using the link at the end of this post.

Day of the Dead is an important holiday here in Mexico and we look forward to joining the celebration each year. Though it occasionally resembles American Halloween and is loosely connected (through the Catholic Church’s All Saints Day), the intent and content are very different and Dia de los Muertos is not about fear or evil but is a celebration of the lives of those who’ve passed through this world before us. In the first photo below, Olive Oyl and I are doing the respectful Mexican thing, in the second shot, the scary American thing. 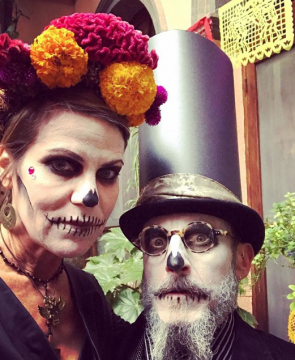 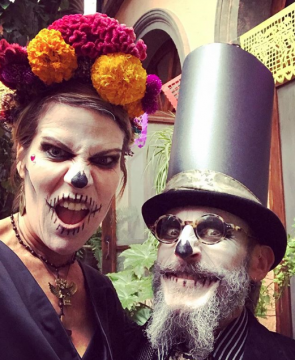 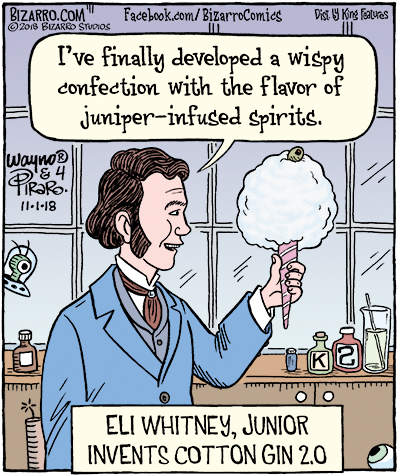 We already have carnival food that makes you sick but now there’s one that also gives you a hangover. Thanks, Wayno! 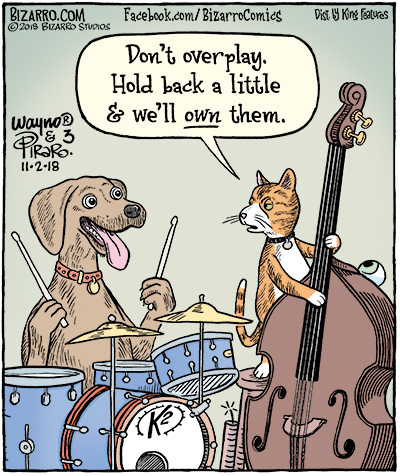 I’ve had no luck trying to teach my dogs to play electric guitar. I figured if Jimi Hendrix can play with his teeth, they should be able to also but so far I’ve been wrong. My cat is pretty good on keyboards, though. As long as they’re connected to a computer. 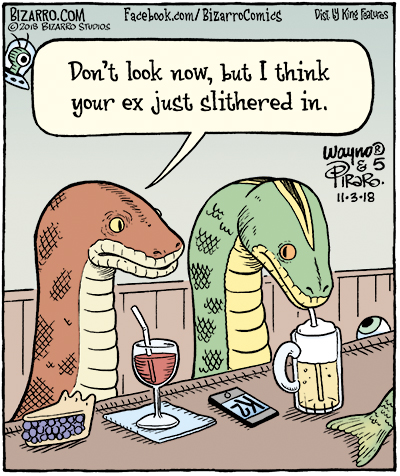 All I have to say about snakes and ex-spouses is that the American legal system isn’t about justice, it is a game that the person with the most money usually wins. And there are more than enough snakes to go around.

Don’t forget to check out Wayno’s weekly post about this same batch of cartoons, at the end of which he includes a super fun video from a fave music group of mine!

Thanks for bobbing along with us in the cartoon rowboat this week, Jazz Pickles. To help support our efforts, please consider leaving a buck or two for us in one of the various places linked to below. Online cartooning is not the automatic get-rich-quick scheme it used to be!