Occasionally, one of the other folks here at King Features, will suggest a question for Ask A Cartoonist. This week, our question comes from Carla, our Global Head of Licensing.

Carla wanted to know: If you could have lunch or dinner with anyone, living or dead, who would it be, and what would you want to talk to them about?

Here’s what our cartoonists said!

From a cartooning standpoint, if I could have lunch with any person, living or dead, that person would be Walt Disney. I would love to talk to him about his animated films, his theme parks and his life, especially his early life and how it influenced all his work. I have been a hug fan of Walt Disney for as long as I can remember. And my interest in Walt grew even more last year when, along with several other cartoonists, I was honored with an award at Toonfest, held each September in Walt’s boyhood hometown of Marceline, Missouri. Walking in Walt’s footsteps through downtown Marceline, seeing his family home, his family farm and the Walt Disney Hometown Museum really made me feel like I was walking on hallowed ground. This comic strip of mine ran last year when I was in Marceline for Toonfest. In addition to the gag itself, you will see the Disney references on the comic books and on the books, as well.

I’ve been blessed to be able to meet most of my idols through the National Cartoonists Society, but Walt Kelly of “Pogo” fame passed away before I had an opportunity to talk to him.

I’m at the beginning stage of doing a graphic biography of my cartoon hero, Ernie Bushmiller.

So if I could have lunch with anyone, dead or alive, it would be with Ernie.
Since I’m in control of this fantasy, he would immediately give me an enthusiastic thumbs up for my project and then start divulging one colorful anecdote after another. At some point in this imaginary lunch date, Nancy and Sluggo would show up and volunteer to pose for drawings. Nancy would tell me exactly how many spikes are always in her coiffure and Sluggo would tell me who his real parents are and why they allow him to live alone in a shack on Drabb Street.

Ernie and I would share several Heinekens (his favorite beer) and then we would discuss the plays of Samuel Beckett.

I would like to have lunch with Alexander Graham Bell, and I would like it to be with him coming back to life in our time. He would just think it was a normal lunch, and then I would take out my cell phone, and ask him what he thought, and whether he imagined anything like a cell phone when he first was inventing and patenting telephones.

Well, according to Hank, there’s at least ONE person in the great beyond Dennis would love to have a burger with. 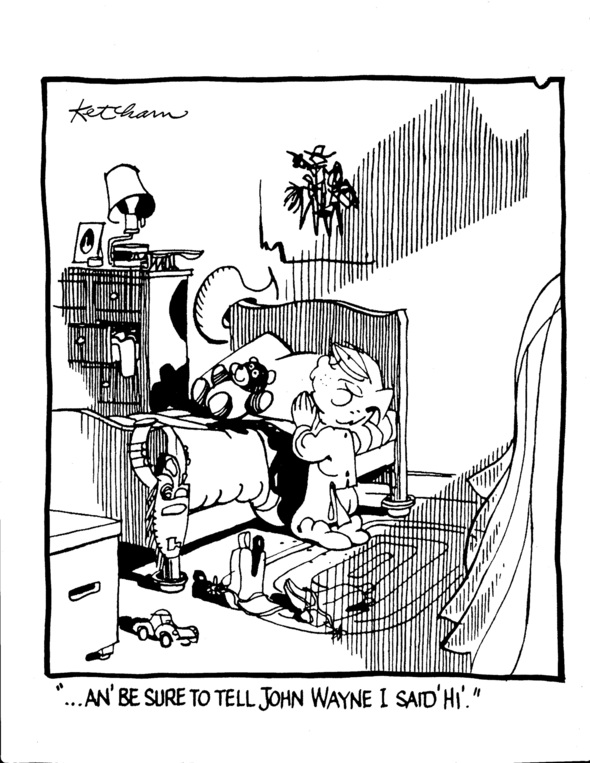