Ask A Cartoonist: Words of Encouragement! 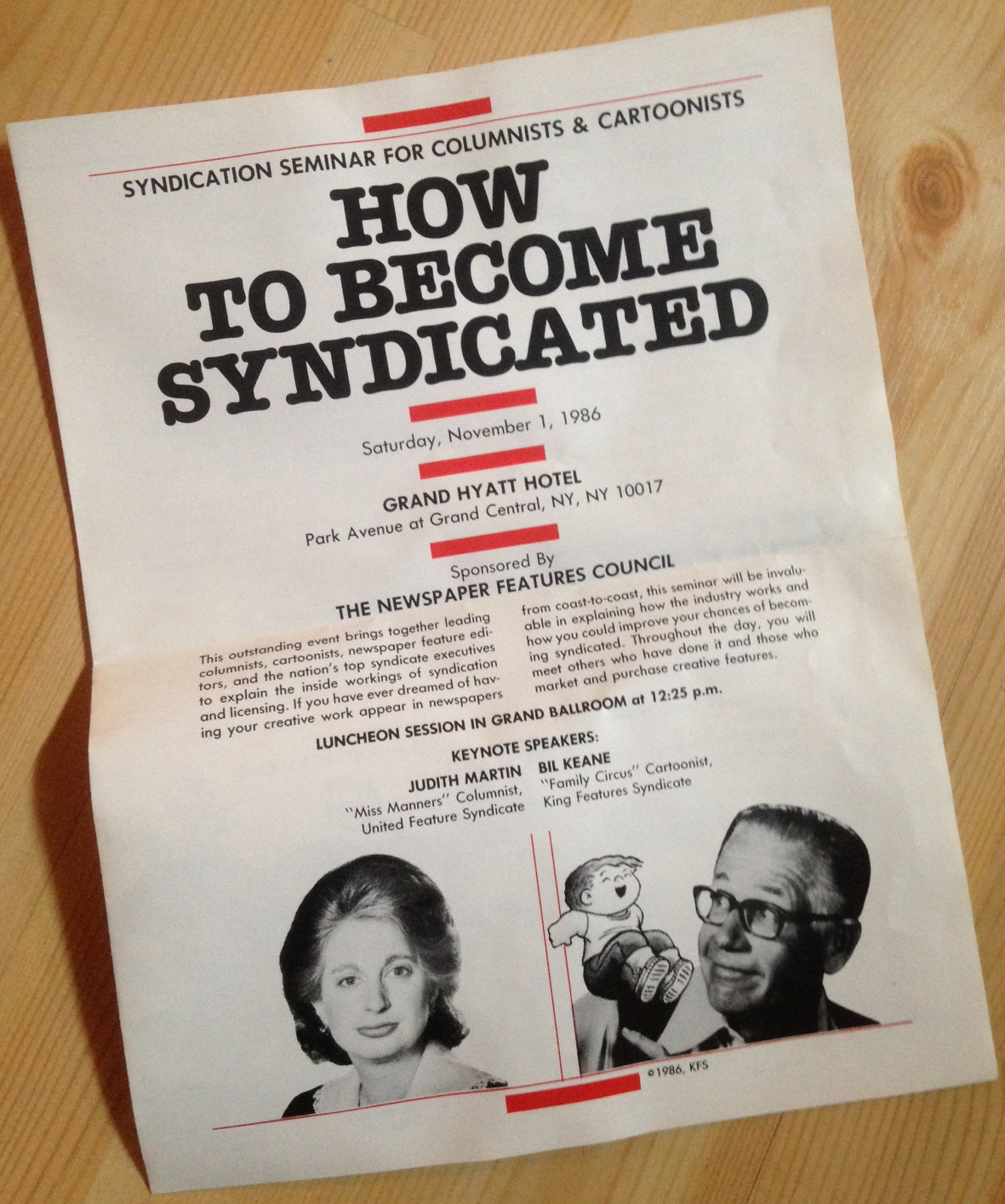 Some of my favorite Hank panels are the ones where Dennis is mentoring little Joey. He’s always encouraging him to appreciate the world around him. 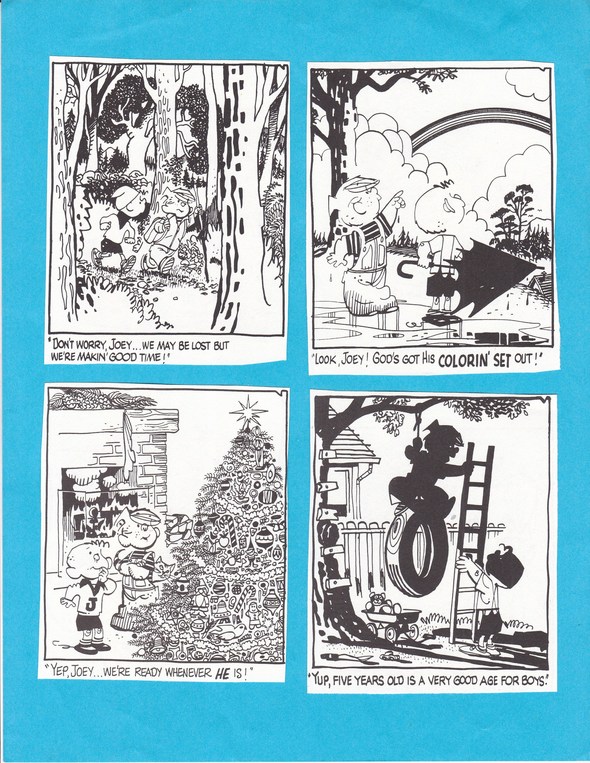 In answer to what is something that encouraged me on the road to becoming a cartoonist – The most important is Joe Kubert, who legitimized drawing comics/cartoons as a career through the school he founded and that I attended.

Graduating High School I had no direction. I grew up inspired by comic book artists, but to make a living off it seemed as remote in the late 1970’s and early 80’s as saying you were going to be an astronaut and go to the moon. Sure, people did it – but there didn’t seem to be any clear path to actually doing so. I tried a local art college in my hometown of Minneapolis, but at that time the instruction I received veered away from the traditional and was more fine art and conceptual. The disdain I got regarding comic art from teachers and students alike had me bowing out after one semester.

Around that same time I started picking up a comic book called “Swamp Thing” written by Alan Moore with art by Stephen Bissette and John Totleben. The artwork and storytelling FLOORED me. The Comics Journal hit the newsstand with a cover piece spotlighting Swamp Thing where Bissette and Totleben mentioned a new school they had attended founded by a veteran comic book artist – Joe Kubert. Not long afterward I spotted a copy of “The Joe Kubert School presents: 1st Folio.” Reading Joe’s introduction on the inside front cover I felt like he was almost talking to me personally… 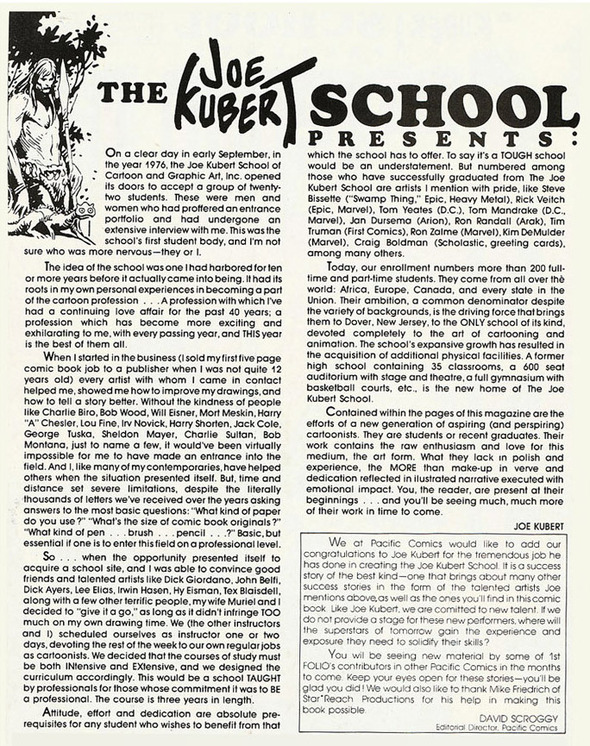 My parents were always supportive of my aspirations to be a cartoonist – as long as I was actually pursuing it. So even though it seemed a long shot, I eventually got up the nerve to apply. After a portfolio review and interview by Joe Kubert himself (done long distance as I was out of state) there followed the anxiety that my work wouldn’t be up to par. Suffice it to say I eventually received my letter of acceptance. With Joe at the helm, the school legitimized that working as a cartoonist or comic book artist could be a career path, as along with Joe, every class was taught by someone who worked in the field. And I can’t stress enough that this was WAY before “graphic novels” starting seeping into the general public’s lexicon and movies based on comic book characters were mainstream blockbusters.

Joe Kubert passed away in 2012, but the school still thrives with his sons Andy and Adam at the helm (both stellar comic book artists as well). It’s a living testament to the hard work and love of the craft that Joe and his wife Muriel put into the school for over 30 years. I’m proud and honored to be counted as an alumnus. For more on the school check out kubertschool.edu

That quote couldn’t be more true. Allow me to relate it to my “story” ; early on, I was fearful – “what if Jack Elrod didn’t think I was good enough?”, “What of King Features didn’t think I was good enough” … I was scared, just fearful that things might not work out, but you have to overcome your fears and once you put them behind you, you’ll see that they really weren’t worth all of the concern you had given them!

I was inspired by the works of others … mostly the comic work of Richard Corben! Alex Raymond, Wallace Wood and others also caught my eye as well. I was indeed fortunate – Jack Elrod was a good mentor! Kind and steady, he was patient and if I needed to give areas of my work a little extra attention, he’d tell me where and how.

I found it useful to LEARN from the works of others and employ what you’ve learned into your own technique, but, most importantly, never, never give up on your dreams!

“You have something there, Jeff. Keep it up.”

Mort Walker said this to me after leafing through a dozen or so of one of my first comic strip attempts.

It was 1986, I was 27, working in City Planning while drawing cartoons at night, and had flown to New York City for a “How To Become Syndicated” seminar put on by the Newspaper Features Council. The seminar was stocked with some genuinely stellar cartoonists and columnists, and I made sure to meet them all, but Mort was the guy for me. I’d devoured his book on cartooning called, “Backstage At The Strips” ten times or more since receiving it for Christmas when I was 18. It was like Zeus telling me to “keep it up.”

For years after, it was still always a thrill spending time chatting with Mort at the Reuben Awards and other cartoonist events– I often would remind him of that first meeting in NYC and what that little bit of encouragement meant to me. He’d chuckle and say, “See? It worked.” 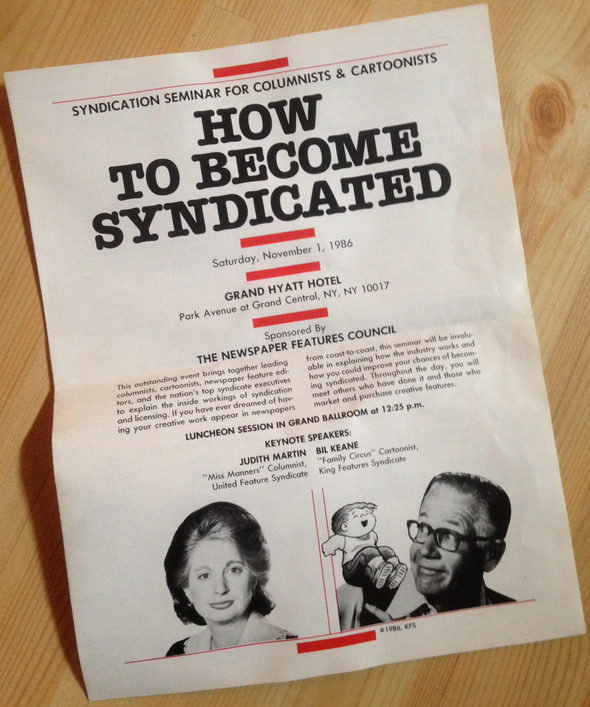 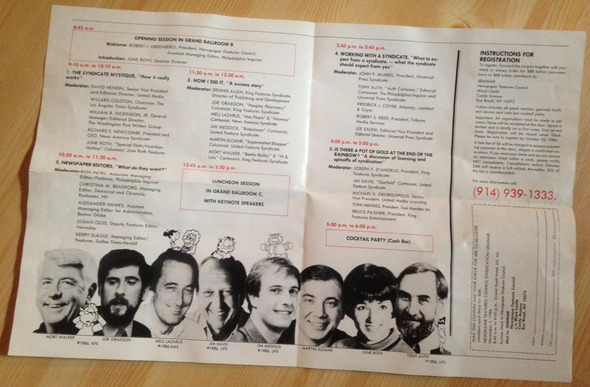 I once sat across the desk from Jay Kennedy, our late great King Features comics editor, as he poured through piles and piles of comic strip submissions looking for the special talent that might produce the next great comic strip. I asked him if there was any common thread among those creators who eventually made it in the business.

“The ones who succeed have all reached out to other cartoonists they admire before their submissions find their way to my desk,” he said.

I had done exactly that myself. At Kenyon College I had been invited to illustrate a series of articles for the school newspaper on famous Kenyon alums. My caricatures of Paul Newman, Edwin Stanton and Rutherford B. Hayes were very much in the style of David Levine, the legendary artist for the New York Review of Books, and I had written to him for advice. Amazingly, Levine hand-wrote a six-page response full of both universal wisdom and microscopic tips. It must have taken him a whole evening to write, and it put wind in my sails for years. His generosity still floors me.

Likewise, when every aspiring editorial cartoonist was falling under the spell of Jeff MacNelly’s work, I sent him samples of my fledgling college cartoons, which were struggling to stand on their own four legs like Bambi on an icy pond. His response — essentially, “keep going” — was all I needed to hang in there until I found solid ground. I reread that letter a thousand times until, eventually, my hands stopped trembling.

I do my best to answer every sincere aspiring cartoonist who works up the courage to get in touch.

I have been blessed to be inspired by many talented cartoonists and, in the past when asked this question, I have written about cartoonists Fred Lasswell and Mike Peters who have both been great sources of inspiration for me. Let me write about someone else today. Another huge source of inspiration for me was cartooning legend Mort Walker, who sadly passed away this year. As a young, aspiring cartoonist I wrote to Mort and mailed him some samples of my comic strip and editorial cartoon work. This was long before the days of the internet so I sent everything via postal mail. Being such a grand luminary in our field, I wondered if he would have the time to write me back. To my surprise, he wrote me back a very nice, encouraging letter! He even took the time to critique my comic samples telling me what worked and what did not. I was so inspired to receive this letter from Mort! It really kept me going and I continued to submit and re-submit my ideas to syndicates and newspapers in hopes of one day becoming a professional cartoonist. Much later, as a professional, I joined the National Cartoonists Society and had the pleasure to become friends with Mort. He was such a nice man, always willing to talk cartooning. This photo, taken a few years ago shows me bowing before the King of all cartoonists! He really got a laugh when I told him I wanted to take a photo like that! Thank you Mort Walker, for your inspiration and your friendship! 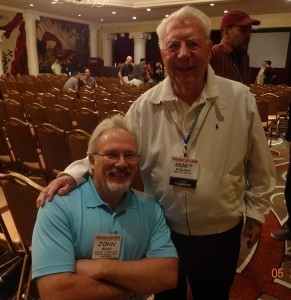