Everyone at Comics Kingdom would like to wish the warmest congratulations to Liniers for receiving both the Eisner and Inkpot awards at San Diego Comic-Con this year! 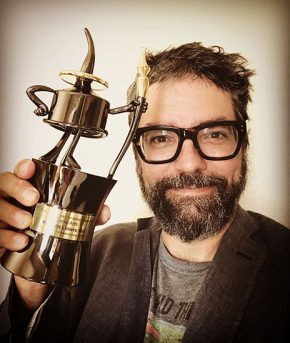 The newest member of the King Features family, Liniers will be bringing his celebrated comic strip, Macanudo, to the United States this Fall!

Liniers won the Eisner Award for Best Publication for Early Readers for his children’s book Good Night Planet and the Inkpot Award. Named for the pioneering comics creator and graphic novelist Will Eisner, The Eisner Awards, considered the “Oscars” of the comic book industry, bring attention to and highlight the best publications and creators in comics and graphic novels.

Presented to Liniers just before his panel on Sunday afternoon, the Inkpot Award is a recognition given to individuals for their contributions to the worlds of comics, science fiction/fantasy, film, television, animation and fandom services.

We are so thrilled to be able to introduce all of you to more of Liniers’ magical cartoons, coming in September to Comics Kingdom!