News Around the Kingdom: SILVER STARS

Re-sound the trumpets!  Last week, we let you know that Hilary Price was nominated for the Reuben Award for Outstanding Cartoonist of the Year, cartooning’s highest honor, for her amazing, laugh-out-loud comic strip, RHYMES WITH ORANGE.  This week, we’re excited to add the news that two other Comics Kingdom cartoonists have been singled out for honors from the National Cartoonist Society in the form of the Silver Reubens, divisional awards that recognize cartoonists who are at the top of their game in a number of categories from animation to greeting cards.

Terri Libenson was nominated in the category of Newspaper Strip for THE PAJAMA DIARIES. Follow along with Jill Kaplan, Freelance Working Mom Extraordinaire, as she balances the challenges of a design career with the joys and tribulations of parenting two teenaged daughters. (And don’t forget, you can meet Terri this very weekend!)

Mike Peters was nominated for not one but TWO Silver Reubens this year: one for his work as an editorial cartoonist, which has been as superlative as we have come to expect; and one for Newspaper Strip for MOTHER GOOSE AND GRIMM, one of the most cheerfully manic comic strips to ever grace the newspaper pages.

All the winners will be announced on May 26 — good luck, everyone!

David Reddick of INTELLIGENT LIFE recently shared a heartwarming blog post about his drawing desk, which his grandfather built for him — from scratch; no IKEA here! — when David was 14. And then he let us know exactly how much the desk has helped him over the years by showing off some knockout drawings of his favorite classic comic characters in this week’s strips!  Here’s a look at a couple of our favorites!

And on his own blog, John Rose of BARNEY GOOGLE AND SNUFFY SMITH shared this pretty amazing vintage photo of Tater on the nose of a military plane during the Vietnam War! Just goes to show that comics show up in the funniest places! 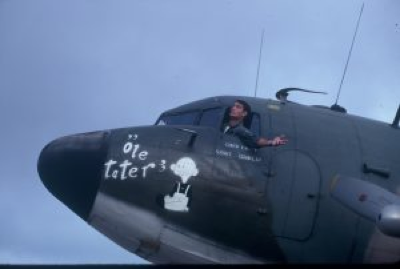 Till next time, comics readers, keep looking up!