News Around the Kingdom: OUR MUTUAL FRIEND(S)

Sound the trumpets! Congratulations are in order for Hilary Price of RHYMES WITH ORANGE on her nomination for this year’s National Cartoonists Society Reuben Award for “Outstanding Cartoonist of the Year”! The winner will be announced May 26. 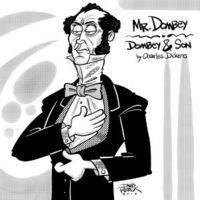 Dear reader, given that you are a devotee of the comics genre, you are therefore obviously an individual of great taste. Mayhap you’ve also been known to enjoy a classic novel or two, and if this is the case, you won’t want to miss the collision of those worlds inherent in INTELLIGENT LIFE artist  David Reddick’s interpretations of the eccentric characters of his own favorite author, Charles Dickens!

To everyone else at FASTRACK, INC., Fi seemed like the toughest of nuts — until Dethany revealed there was a (slightly) chewy center inside that crunchy shell. Relive the best and worst of times in Fi’s life in the new Fastrack strip collection, “Invasion of the Goth”!

MOTHER GOOSE AND GRIMM mastermind and editorial cartoonist extraordinaire Mike Peters was feted last week for his fifty years of partnership with the Dayton Daily News (he obviously started as a zygote). Get a glimpse behind the scenes in the paper’s recent tribute, including another, even more unforgettable appearance of Superman.