Mmm, delicious pie. It’s also International Science Education Day. While people often separate the arts and sciences, so many cartoonists have a deep love for science, so today we’re putting on our scientist hats and telling our favorite science-related stories!

I like to read about things I don’t understand. Like Einstein—or quantum physics….or Donald Trump.
I did this strip after slogging through Brian Greene’s “Fabric of the Cosmos”.
When I finished the book (skipping anything to do with math), I felt the bowling ball metaphor Greene used was right up Zippy’s alley—so here’s everything I know about space, time, gravity an’ stuff.

I did some illustrations for the 2018 calendar of the Union of Concerned Scientists, and since the calendar is already out, I don’t think they would mind me sharing the images – especially if I directed viewers to their website – because they are a non-profit. You can visit them here. 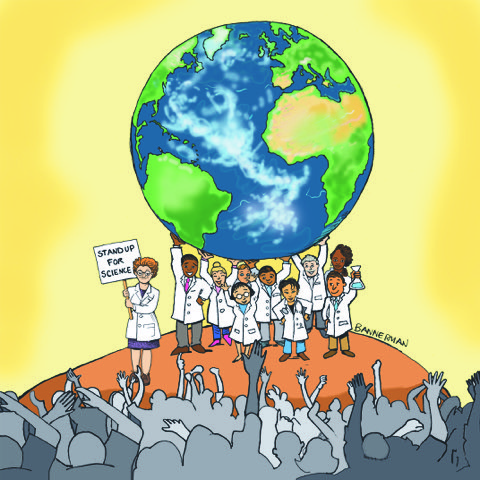 And, since it is still Women’s History Month, I can tell you that the person holding the “Stand up for Science” sign is based on a real person – none other than Dr. Elizabeth Russell, a premier mammalian geneticist, who hired my dad to do research back in the 1960’s and 1970’s.
She had a very distinctive shock of red hair, and a glorious smile to go with it.  Read about her here.

DENNIS always had the makings of a great scientist! 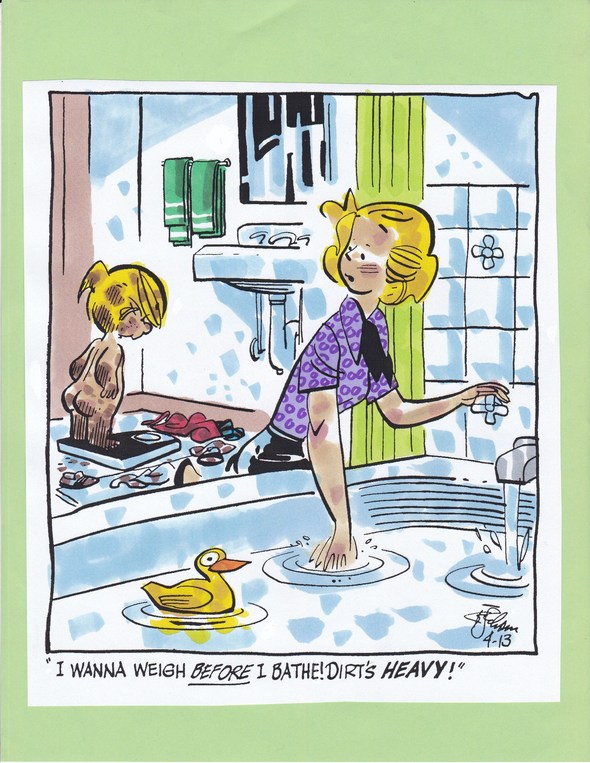 Science happens all the time in “Safe Havens,” led by the resident genius Samantha who is currently on her way to Mars where signs of extraterrestrial life have just been detected. Previously she unlocked the genetic code, and revived the dodo. (She frequently regrets the latter decision.)

I did a degree in Biochemistry and worked as a clinical research scientist for years before becoming a full time cartoonist. I still love science and draw a comic for a kids’ science magazine that is published in Australia. 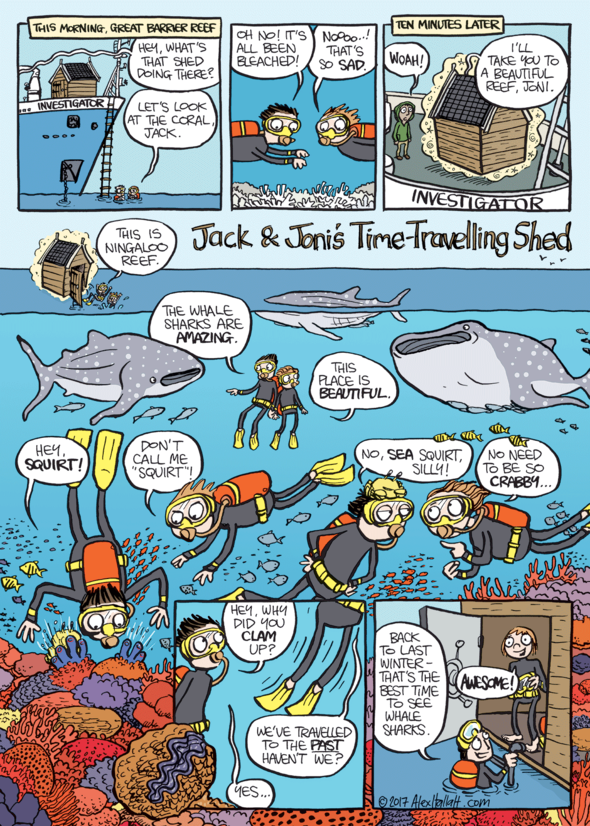 Like Edison, I grew up loving all things science. I try to incorporate it into the strip whenever possible. In 2013, I introduced Katie Franklin to the cast. Katie gets her name from Rosalind Franklin, an English chemist whose work paved the way for the discovery of the structure of DNA.

“Not too long ago I had the pleasure of collaborating with two physicists on a book about physics and the quantum world (“Quirky Quarks: A cartoon Guide to the Fascinating Realm of Physics”) The project led to an exciting trip to the Frankfurt Book Fair— in which we gave a presentation—and then, closer to home, an awesome meetup with scientists in a physics lab at the University of Toronto. What did I learn? That the cartoon cliche of a scientist making calculations on a blackboard is totally 100% true (yes, they really do that!) I also learned that scientists are fun, imaginative folks— a lot like cartoonists. I’m so happy to have brought my skills as a comics artist to the scientific community. Happy PI Day, everyone! Here’s a pic of the book… and if you’d like a copy, click here!

Happy Pi, International Science Education, and Celebrate Scientists Day! I’m a big science lover (though my school grades never reflected this). And growing up along Florida’s Space Coast standing in the backyard watching rockets lift off, as well as making lots of visits to Kennedy Space Center, I think it’s safe to say I’m a total “orbit-head” who’s wild about all things space. Here’s a down-to-earth strip we did a couple of years ago that explores our place in the vast cosmos.

In this comic strip I created from a few years ago, I don’t think Snuffy really understands Jughaid’s question about Einstein’s Theory Of Relativity! Or, does he?!