Was that a trumpet you just heard? Must be time for some more News Around the Kingdom. 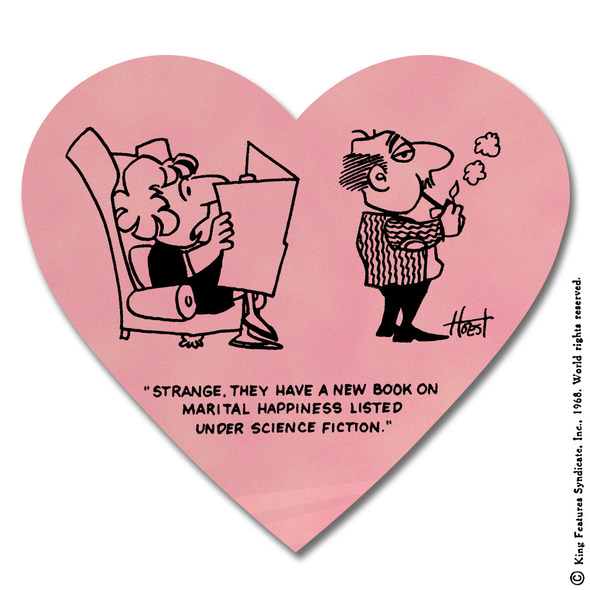 Happy Valentine’s Day! In honor of the occasion, our favorite feuders Leroy and Loretta set aside their differences long enough to release a brand-new batch of vintage strips from the LOCKHORNS archives. Flash back to Leroy’s ’60s-era mustache here.

Olde England collided with Hootin’ Holler when Thomas Yeates of PRINCE VALIANT and John Rose of BARNEY GOOGLE AND SNUFFY SMITH shared the stage at Bridgewater College. Get a glimpse of the epic shenanigans here.

Syfy Wire had fun casting roles for a fictional movie about the classic King Features comic KRAZY KAT. Hollywood, if you’re listening, The King fully supports all of these choices.

Warmer weather is just around the corner. Feeling the urge to travel? Let the King guide you to some great cartoonist events coming up later this spring!

Jerry Scott and Jim Borgman of ZITS will be appearing at the Tucson Festival of Books on March 10 and 11. They’ll be anchoring the panels “Humor and More” and the delightfully titled “Don’t Expect Any Leftovers: Living with a Teenager,” and also be signing their anniversary collection “What Was That All About?: 20 Years of Strips and Stories.” Check the website for more details.

Monday CHIX Isabella Bannerman has a busy April in store. On April 7 and 8 she will be at MoCCA Fest in NYC, where you can pick up a copy of her new anthology comic, “Fight Fascism.” Then, on April 21 and 22, she will be part of the River Arts Studio Tour in Hastings-on-Hudson, NY, selling books and cartoons along with framed prints and paintings. Check the links for more info.

That’s all for this week. Enjoy the cheap chocolate!