Last week, I wrote a brief tribute to Mort Walker.

You can read it here

Mort offered so much of himself to the cartooning world, and I wanted to give all of our cartoonists an opportunity to talk about his impact on them.

I know I’ve been reading Beetle Bailey for as long as I can remember– I have early memories of Sarge hanging off a cliff, and I learned to draw fight scenes from the puffs of dust that surrounded Beetle and Sarge every time they got up to fisticuffs. I discovered Hi & Lois later, but Trixie’s precocious existentialism made her a favorite comic character for me.

And that was before I met Mort. Mort has been a delight to work with during my time at King Features– always at the ready with a story or joke, and I’ve learned so much about how comics have changed since his career began just from corresponding with him over the course of my day-to-day work. It’s been such a pleasure to work with him, and I absolutely treasure the fact that I was able to contribute, in a small way, to supporting a cartoonist who gave so much to me even before we met.

Here are some remembrances and thoughts from our cartoonists:

Mort Walker is one of my cartooning heroes. He was very encouraging towards Intelligent Life, as I got to speak with him in person at a cartooning event at The Billy Ireland Cartoon Library & Museum a couple of years ago, and he gave me some wonderful advice and some joyful insights into it and what I wanted for Intelligent Life. Thank you, Mr. Walker, as you were, and always will be, exactly what I’ve always felt a cartoonist can and should be, and I will strive to live up to your example one day. 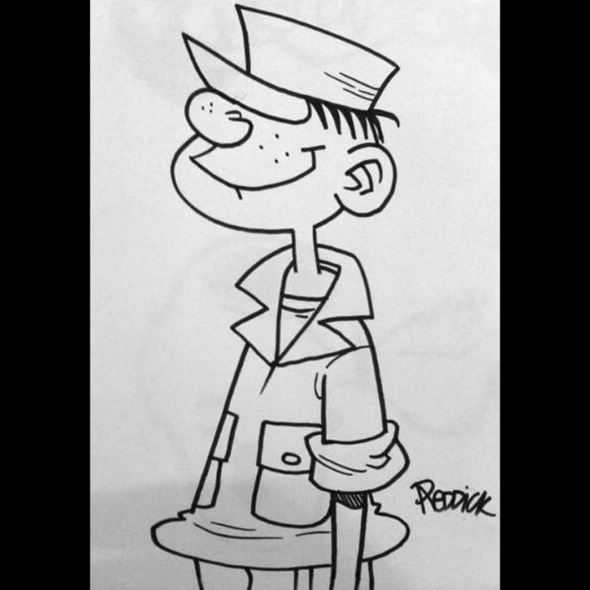 This sketch of Beetle Bailey by Mort Walker hangs on my wall over my studio desk. A drawing he sent me in 1995 when I was still fresh out of my 4 year tour in the U.S. Navy and just a novice with big dreams. Thank you, Mort Walker, for a lifetime of kindness, generosity, inspiration and an example of a good life. They tell you never to meet your heroes because they will let you down… but I can honestly say when I met this man nothing could be further from the truth. 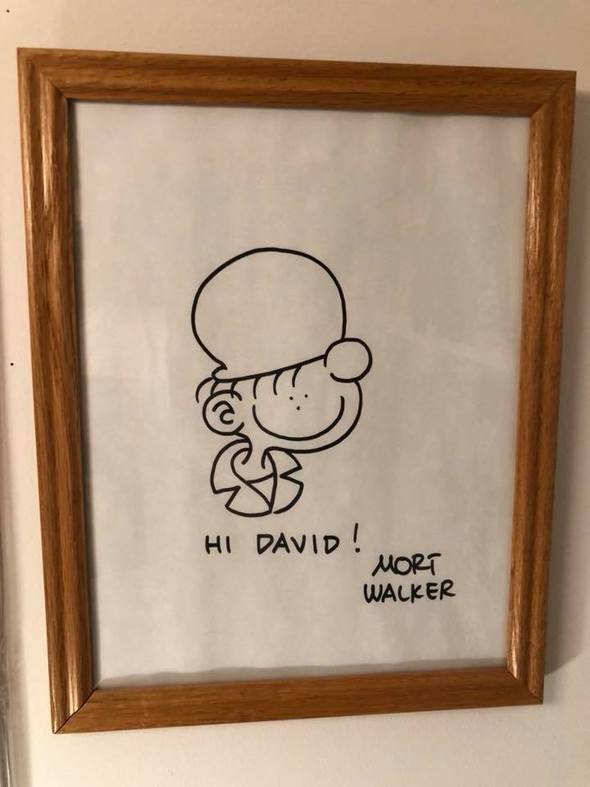 Mort was always very kind in taking an interest in other cartoonists. I was bold enough to ask him if I could send him some of my work to look at, and he, and Bill Janocha said sure. So I sent him some things, and I sent an original, just as a way to say thank you. A few weeks later, I got this in the mail. I hadn’t asked for it, wasn’t expecting it, but I treasure it. I don’t know if you can see how clean the lines are. I remember him saying that it took him a long time to settle on his clean, simple lines, but that once he did – it never failed him. 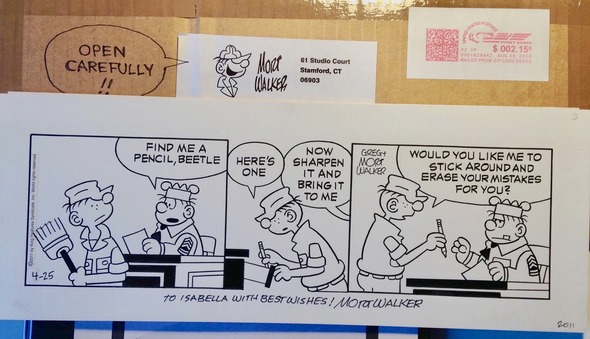 Mort was the last connection, at least in my experience, to the “Old Guard” of the daily comic strip universe. He was warm and welcoming to me when I first began my long tenure at King. Both in talent and heart, they don’t make ’em like Mort any more.

I’ve been coloring the Beetle Bailey Sunday comic strip for close to 30 years now, first on staff and now as a freelancer. Not only did I color the Sunday comics for at King, but also any promotional projects that cropped up. Here’s me with a Beetle cardboard stand-up I colored back when I first started at King in 1989. 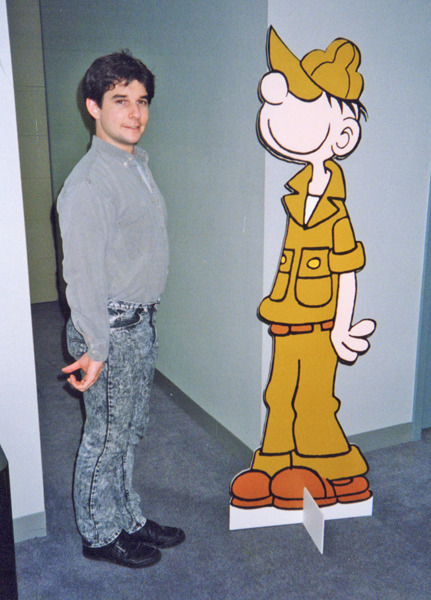 It’s been a privilege to color Mort’s Sunday page over the years. 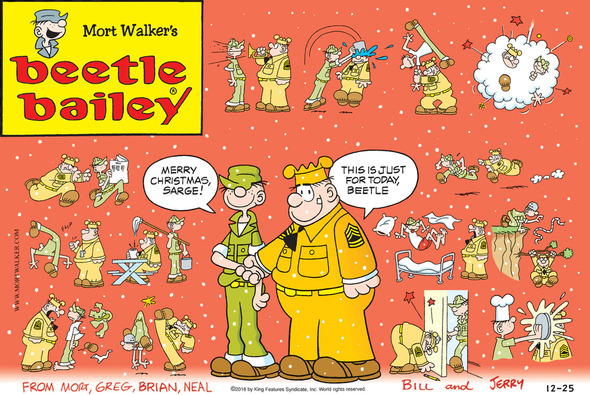 My heartfelt prayers go out to Mort’s family and friends during this difficult time. 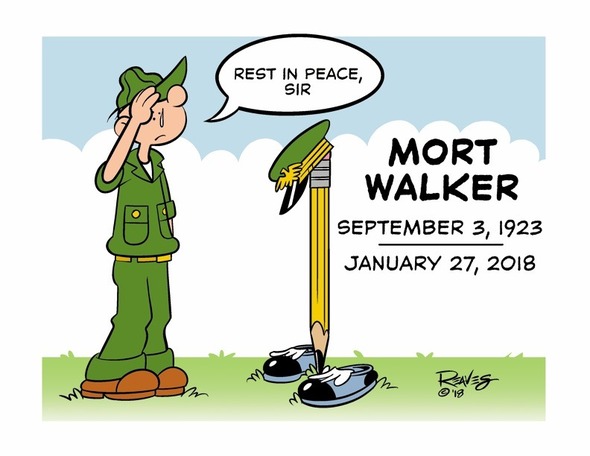 I had the opportunity to visit Mort Walker in his studio a few years back. He was gracious and kind and toured me all around the huge space- formally owned by the sculpture artist who created Mt. Rushmore. However, my favorite part was the tiny pencil doodles of his characters on simple white copy paper that lay scattered on his desk. He was working through gags for his strip, like every other working cartoonist. 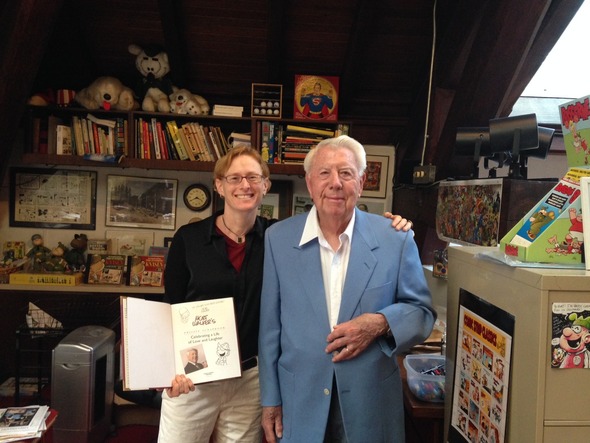 I hold Mort Walker mostly responsible for my desire to become a syndicated cartoonist. It was essentially a bait-and-switch operation. In the mid-1970s Mort published a book called Backstage At The Strips. 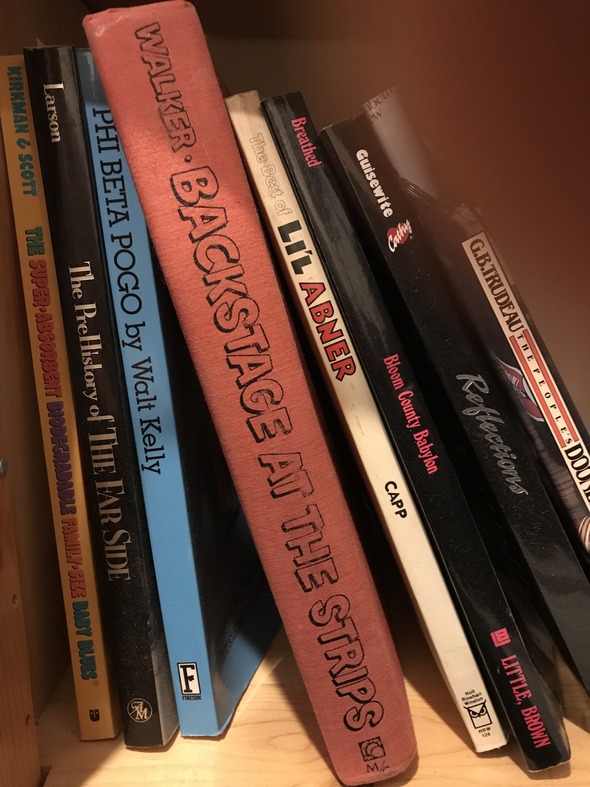 Jerry Scott and I had just met, and were both engrossed in reading Mort’s account of the life of a syndicated cartoonist. We were enthralled by his life, which we took to be: Goofing around with his buddies, playing golf, drinking cocktails and then drawing a bunch of funny pictures. In exchange for that work: fame, fortune, and a ton of fun. We made a short-lived attempt at semi-self-syndication (a DIY syndicate created by our boss). In those two years, we: Worked hard nights and weekends, (yes, we goofed around, too), NEVER played a round of golf, we had a few beers, and drew a lot of pictures—some of which were funny. And accordingly, no fame, no fortune. We did have fun, of a sort. And we learned a lot. We learned first, that the life depicted in Mort’s book wasn’t a sure thing if your strip appeared in newspapers. Ten years later, we tried again with Baby Blues. Once again we were faced with the hard fact that we had arrived a few decades too late for the life of Mort Walker. We still didn’t play golf, or drink cocktails in the studio…but we had learned to draw mostly funny pictures. And we did start to have some success and a modicum of fame, and eventually stopped living paycheck-to-paycheck. A few years after Baby Blues started, we received a handwritten note from Mort with a copy of a newspaper poll he thought we’d be interested in because we’d placed well. And, a request for the original strip that accompanied the poll. His request was one of the milestones that meant that we had, indeed, made it—despite the lack of golf and cocktails. In a way, we still felt duped by Mort and his book, but it was too late. We were successful syndicated cartoonists. I can never forgive him for that, or thank him enough. P.S. In preparation to write this, I pulled the book off my shelf. In the very front was a disclaimer that I read for the first time, 43 years later. It says: “If the stories in this book are not exactly told the way they happened, it’s the way they should have happened if God had been a better gagwriter—or if I’d had a better memory.” Maybe it’s a good thing I never read that disclaimer. Thanks, Mort.

I met Mort Walker when I was about 15 or 16. I had been in the industry for only a few years when my curiosity led me to The Cartoon Museum in Connecticut, spearheaded by Mort and his sons. I was amazed by all the examples of vintage comic strips and animation. Being a kid raised in Harlem, I never knew such a wondrous place even existed. In my boldness, I spoke to Mort himself. Luckily he had heard of me, and of course I heard of him. The industry had heard of this Black kid who was making his rounds freelancing. We struck up a friendship that would last decades. 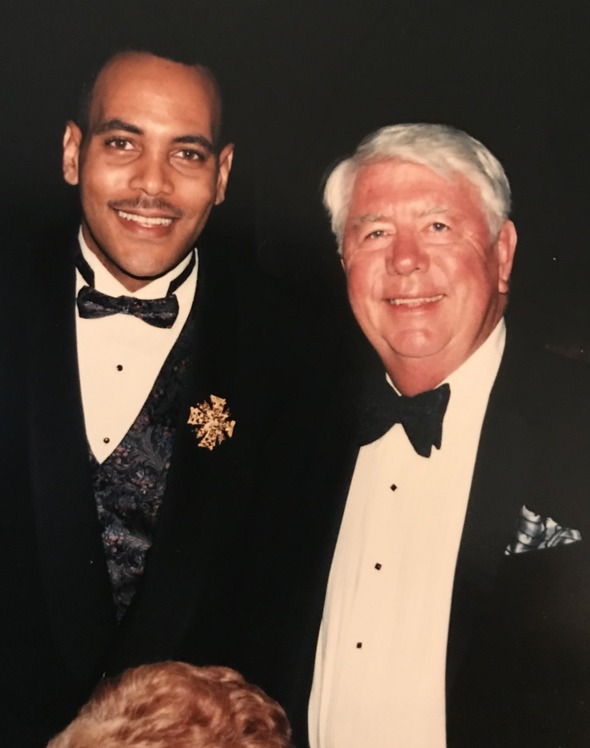 Mort is actually the first to push me into speaking engagements at the museum. I guess I was too young and dumb to ever feel nervous speaking in front of crowds and it flowed easily. To my surprise, I also discovered the many other cartoon creations he was responsible for, other than Beetle Bailey. More importantly (to me), I found that he had also started professionally very young — I began at twelve, he began at eleven. It was something we shared in common. Life is definitely different when you start in any industry at such young ages. He was actually the first cartoonist to nickname me “Kid,” a term the other older cartoonists quickly adapted to. My own father had shown no interest in my cartooning career, and in my mind, I sort of adopted Mort as a father-figure. Along with him came a slew of new siblings, all interested in what I was. It was awesome! Mort often teased me if I used too much dialogue, but I knew when I had been admonished and I took his advice and lessons to heart and improved my strip. He was the one who encouraged me to develop my Church Lady Hats theme. I’m not sure if he ever knew just how much he helped me throughout the years because I never told. Now I wish I had. But I’m happy and forever grateful for the love and support. I’m proud to have known him on a personal level and I will remember and cherish those times forever. Rest well and thank you, “Dad.”
Much Love, Ray 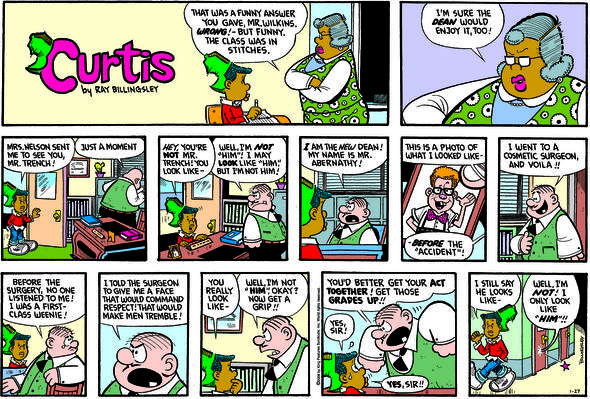 Bill Holbrook, On The Fastrack and Safe Havens:

Mort was a giant in the field, and even with his stature he unfailingly helped aspiring cartoonists. I first contacted him while I was in college, and he wrote back with a very encouraging reply. Five years later I sold “Fastrack” to King Features, and he sent me the following letter welcoming me to King. This kind and generous gesture was very much in character. 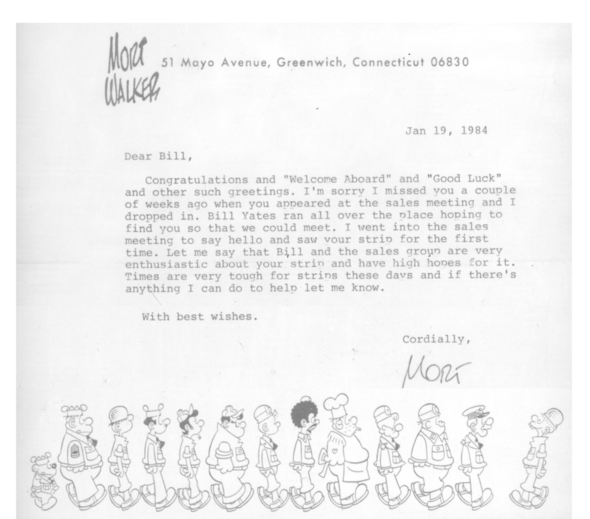 The world lost a legendary cartoonist today. Mort Walker died at the age of 94. Simply put, he was an icon. But he was also a friend. We both produced comic strips for King Features. Mort created the Beetle Bailey comic strip, the Hi and Lois comic strip (with Dik Browne) and seven other comic strips, as well as being the of author of many books. He was a cartoonist I truly admired and respected and learned from. My thoughts and prayers are with his family. Mort and I took this photo in 2015 at a cartoonist gathering in Washington, DC. We had taken just a standard photo of the two of us and Mort commented that I looked taller than him in the picture. Then Mort said, “Hey, I want a picture where I’M taller than you!” He started to climb up in a chair, but I said I would be happy to kneel! After all, it should be common practice for younger cartoonists to kneel before the King of all cartoonists! RIP, Mort Walker. 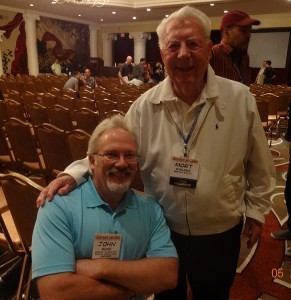 In 1993 I was a finalist for the Reuben award when we met in La Jolla CA. I hadn’t composed an acceptance speech because my co-finalists were giants (Lynn Johnston and Garry Trudeau) and I didn’t think I had a chance of winning. But on the afternoon before the awards banquet I was suddenly gripped with panic and composed a long and rambling what-the-hell speech that covered three envelopes, two cocktail napkins and a Juicy Fruit gum wrapper.

Against all odds, Mort Walker called my name that night as the winner of the Reuben. As I stumbled toward the stage with my armload of notes the only thought in my head was, “I can’t ask Charles Schulz and Mort Walker to stand there on stage behind me while I ramble through all of this drivel!”

So I cut to the chase, gave a quick and heartfelt thank you to everyone, and got off the stage so the lions of our profession could sit down. 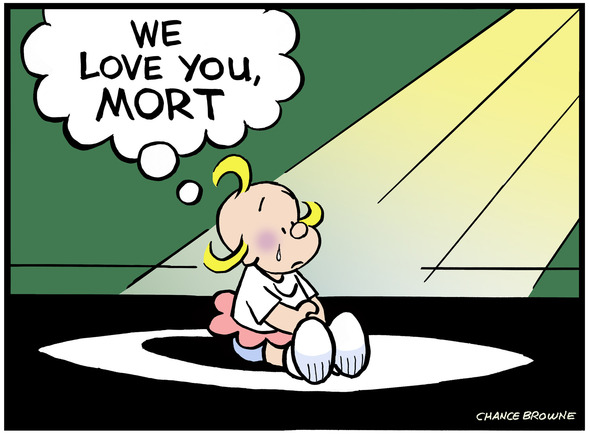