This past week, the cartooning world lost a giant, as Mort Walker passed away at the age of 94.

Mort Walker, the creator of “Beetle Bailey” and co-creator of “Hi and Lois,” will go down in history as one of the great legends of comics.  Inspired by the newspaper comics of his childhood, most notably “Moon Mullins” by Frank Willard, Mort began cartooning at a very young age — he published his first comic at eleven years old, and he was publishing professionally on a regular basis by the age of 14.

Mort was drafted into the US Army during World War II, and he was a great lifelong supporter of our Armed Services and veterans. But though he may have become famous for his cartoons about Army life, he didn’t set out to draw what would become the quintessential military comic strip. King Features brought him aboard to expand upon a series of single-panel cartoons he’d drawn for the Saturday Evening Post featuring a college student named “Spider.”

Spider was already a character in “Big Ben Bolt” by John Cullen Murphy, so in order to avoid confusion, Spider became Beetle and enrolled in college in September, 1950. 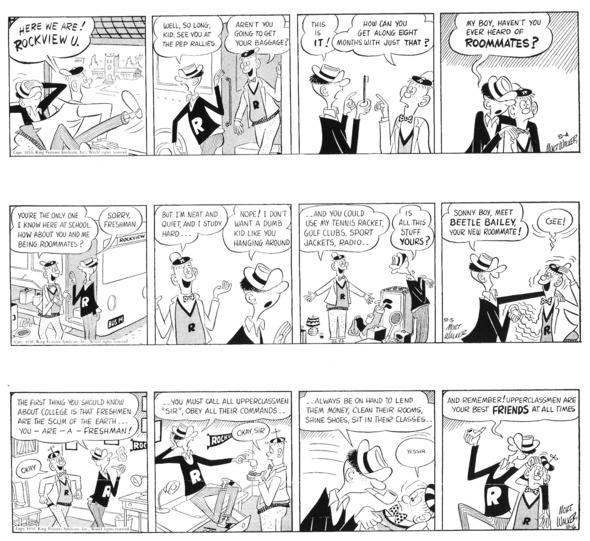 Strips from the first week of Beetle Bailey

But Beetle wouldn’t stay in school for long — in March 1951, just a few short months after “Beetle Bailey” launched, Beetle enlisted in the Army and made his way to the Camp Swampy we all know and love.

”Beetle Bailey” has graced the comics pages of our newspapers for nearly seventy years, and in that time, Mort has worked not only on “Beetle” but on the equally iconic “Hi & Lois,” which he created in 1954 with Dik Browne, and on strips like “Sam’s Strip” — possibly the pinnacle of metaliterary (metacomic?) cartooning — “Sam & Silo,” “Boner’s Ark,” and more. Mort has influenced and contributed to comics in other ways, as well — in the Lexicon of Comicana, Mort coined neologisms like “grawlixes,” “emanata” and “agitrons” that have proliferated into common cartooning parlance. And, always willing to share a story about the cartooning greats of yesteryear with younger cartoonists and comic historians, Mort was a bridge to the early days of comics history and craft, as well as a tireless comic collector and preservationist, which you can read about in this touching remembrance from Cullen Murphy for The New York Times.

Beetle Bailey’s legacy, of course, rests in good hands, with Mort’s sons, Brian and Greg Walker, seasoned and adept cartoonists who were raised right up alongside Beetle and have been working with their father for many years. There’s no one in the world who values and appreciates Mort’s work more– as you can see from Brian’s lovingly crafted  historical posts on the official Beetle Bailey blog, where you can learn everything you could possibly want to know about the one and only Beetle Bailey and his creator.

We’ll be posting more tributes from cartoonists in the days to come, but here are a few words from creators who wanted to pay tribute:

From Bunny Hoest of The Lockhorns:

There are so many wonderful memories I have of Mort Walker…he was a dear friend of my late husband Bill, and a steady support to me after Bill passed away. We had the pleasure of hosting Mort and his family last Summer at our annual “Bunny Bash,” where he drew Beetle Bailey for the kids and regaled us with funny stories.

What I will always cherish is Mort’s playful sense of humor.

When cartoonist and TV writer Tom Gammill came to our studio to film a comic skit for the Reuben Awards he made a note of the fact that John Reiner and I worked right across the water from Mort’s studio and could virtually see each other. We went to the water’s edge and waved towards Connecticut. Later, Mort was filmed waving back and the two scenes were spliced together.

Sadly, we must now wave goodbye.

(Here is another video by Tom Gammill, in which Tom interviewed Mort)

From Dean Young of Blondie: 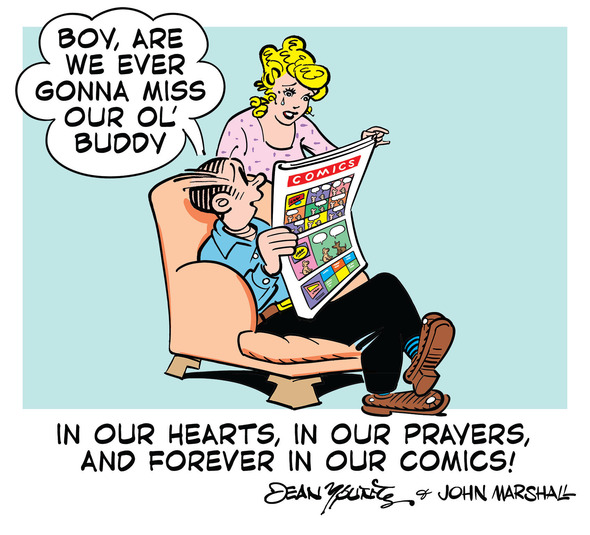 (Click the image to see a celebration of Beetle in Blondie)

From Tom Armstrong of Marvin:

Back many years ago when Mort and Cathy had a place here on Longboat Key, they came with other members of the Florida Chapter of NCS for the annual get-together, which my wife Glenda and I were hosting at our house. At that time the chapter had a traveling bar which arrived wrapped in plain brown bags.

Once the booze was laid out on our kitchen counter, Mort asked Glenda to fix him a drink. Now my wife, who was raised Southern Baptist, was totally in the dark about mixing liquor drinks. To her, having a Mountain Dew was a walk on the wild side! Knowing that there was a roomful of “thirsty” cartoonists Mort patiently proceeded to give Glenda a crash course in bartending. A good time was had by all.

From Ray Billingsley of Curtis:

From Jerry Scott of Baby Blues and Zits:

It arrived about fifteen years ago, and looked innocent enough. Just a plain white envelope that I didn’t bother opening until I noticed Mort Walker’s familiar signature and return address in the upper lefthand corner. Whoa. Mort Walker was writing to me?

The letter (on Beetle Bailey stationery, of course) simply said that he admired the work I was doing on Baby Blues and Zits, and that he thought they were funny strips. It was a simple, but incredibly generous gesture… probably something he forgot about five minutes after dropping it into a mailbox. But to me it was rocket fuel to keep me moving forward. Liquid oxygen for the cartoon soul.

In 2001 I accepted the National Cartoonists Society’s Reuben Award for Outstanding Cartoonist of the Year… presented to me on stage by Mort Walker.

Thanks, Mort. I’ll miss you, buddy.

From Jim Keefe of Sally Forth and Flash Gordon:

In memory of Mort Walker – My pic with cartoonists Mort Walker, Greg Evans, and Ray Billingsley. Circa 1992 at the King Features Christmas Party. I’m biting my lip in this shot because I was just the young pup on staff at King standing next to three guys in the big leagues. My hobbit like size and ill-fitting suit just adds to the magic. 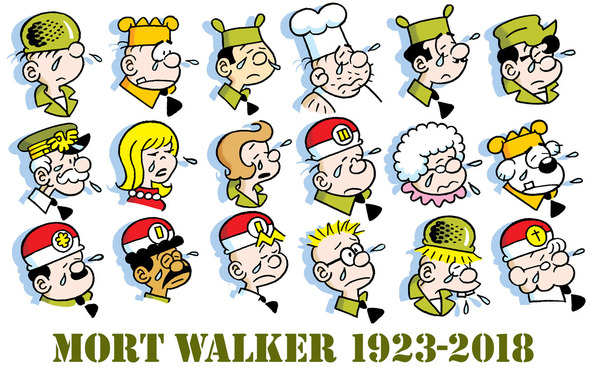