This week, our cartoonists are sharing their favorite childhood entertainment– the toys, movies, books, television shows, and yes, comics, that stuck with them and maybe even influence them today.

I’m a cartoonist today because I loved comic books as a kid. Not comic strips—comic books–that 52 page 7″ by 10″ kid’s entertainment medium that dominated my childhood, before TV took over completely. It’s possible I haven’t matured much culturally beyond my fascination with Little Lulu, Scrooge McDuck , Plastic Man and Mad magazine. The “Little Max” Zippy strip below speaks for itself.

And the endpapers from the Zippy collection, “Type Z Personality” reflects my love of the medium. If only I’d held on to all those now highly collectible little ‘zines! 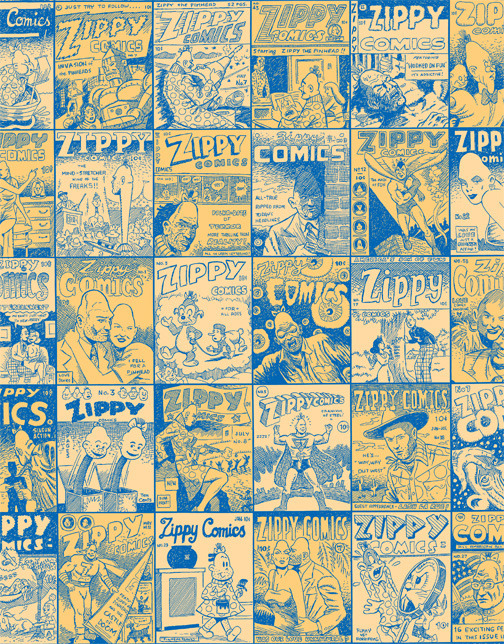 Bill Holbook, Kevin & Kell, On the Fastrack, and Safe Havens:

While it’s well past Christmas, here’s the strip where Santa Claus reminded Dethany of a special gift from her childhood.

When I was growing up, like most aspiring young cartoonists of the 1970s and ’80s, I loved watching Disney movies, Saturday morning cartoons, reading comic books and also reading those small paperback comic strip book collections. In fact, I still have most of those little paperback books! I love them! I was also very interested in puppetry and Jim Henson and The Muppets. I never missed watching The Muppet Show on television each week. A friend of mine and I even built our own Muppet-style puppets and did children’s parties all through our high school and college years for extra money. My love for puppetry seems to have rubbed off on little Tater in this comic strip!

I was already a big Spider-Man fan when I was a kid, but at age 12 the Spider-Man newspaper strip came out illustrated by none other than John Romita. The attached image is the originals for the very first two dailies to see print (from a show at the Society of Illustrators last year). 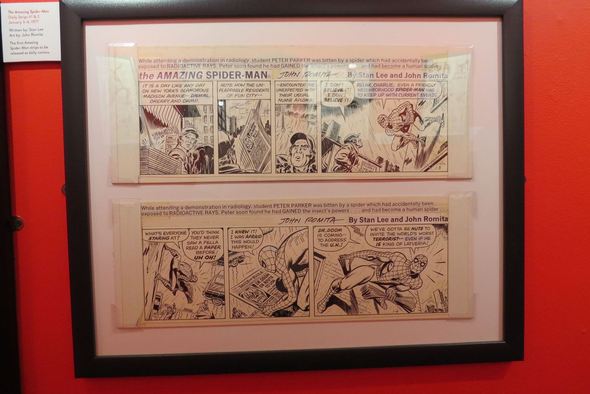 For the next couple years I dutifully cut them out of the newspaper and put them in a scrapbook.
Then suddenly – out of NOWHERE – the Minneapolis Star & Tribune decides to drop it and replace it with…
(Wait for it.) Encyclopedia Brown.
(I repeat) ENCYCLOPEDIA BROWN!!!

I wrote a letter to the editor, and included a cartoon I drew of Spider-Man swinging away from the Star & Tribune building saying “You may have gotten rid of me for now, Star and Tribune, but I’ll be back!” Lo and behold the following Sunday the newspaper ran it in one of their columns.

This being my first experience with newspaper reproduction, I was amazed how the lines I carefully rendered on Spider-Man’s costume came out as just one big black blob.

“Wright (managing editor) and Wallace Allen, associate editor of the Tribune, think they have found a suitable replacement in “Encyclopedia Brown,” who appears for the first time in the Tribune today.

Brown is a boy detective confronted with a new crime each Sunday. He solves it by Saturday. Readers are given the same clues that Brown has and are invited to see if they reach the same solution.

It’ll have to be to satisfy Keefe. “Woe be it to you,” he wrote. “May Dr. Doom trample your upholstery, may the Rattler bite your dog and may Mysterio make mincemeat of your hamburger.”

The sentiment still stands – once a fanboy always a fanboy.

The story does have a happy ending though. My Aunt Pat who lived in Boston got wind of this and sent me the strip out of her newspaper for the next two years.
Years later, I paid homage to my Aunt by giving her a cameo in a Flash Gordon Sunday page.
Here’s the strip…

And here’s a pic of my Aunt Pat and Uncle Whit.

?
And I still have the scrapbook. Four years of stellar Romita art and lots of fond memories…

Back in the early ‘50s, we could see our favorite cowboys
Roy, Gene and Hopalong every week
at the Saturday movie matinee for 9 cents.
Sometimes they would let us in for free, if we brought
a can of soup for the food pantry.
My cousin and I spent the afternoon in our cowboy outfits,
playing our version of the movie we had just seen!
Also, I liked to cut the daily “Hoppy” comic strip out of the newspaper
that my grandma saved for me.

My brown paper bag of plastic army men, zoo animals, cowboys, random dinosaurs and presidents of the United States was my favorite toy as a kid. I carried that bag everywhere and staged battles under the dining room table or amid the roots of an old tree in my backyard.

My dad was a signpainter, and the way back of our station wagon was his mobile shop full of tarps, turpentine cans and valises of paint and brushes. That’s where my little brother and I rode whenever my family drove somewhere in those pre-seatbelt days. Tom and I would drape the paint-splattered tarp over the seats and boxes, creating a landscape of colorful lakes, mountains and tar pits where cataclysmic disasters always seemed to happen.

The MAD Reader flipped a switch in my childhood brain. By the age of 9, I was already a fan of MAD magazine, with its TV and movie parodies, cartoons by Dave Berg and Don Martin, and Al Jaffee’s fold-ins, and I saved up my allowance to buy the paperback collections. The MAD Reader reprinted material from MAD in its original form, as a comic book edited by Harvey Kurtzman. When I saw Will Elder’s “Starchie,” I knew I had my hands on something my parents would not want me to see, and it was absolutely thrilling. Over the years, there were a few other revelatory reading experiences (among them my discovery of underground comix and early issues of National Lampoon), but The Mad Reader provided my first taste of comics as a truly subversive artform.

I spent a great deal of my adolescence reading the Signet MAD books. I still have stacks of them in my studio. Dave Berg was one of my favorite artists and writers, and has had the biggest influence on me. My good ol’ buddy Charlie Brown has also managed to stay with me through the years.

I was in NYC last week, and saw this play cash register at a clothing shop as decoration on the shelf. It immediately took me back to playing in the basement with my sister forty years earlier.
The numbers popped up when you punched the keys, and it made a satisfying “ding!” sound when the drawer opened. I’d forgotten all about it!

(When the shop keeper wasn’t looking, I tried pressing the keys, but they were jammed…)