Ask A Cartoonist: Why, Where Did You Get That Lovely Blouse?

Hi, there! It’s National Compliment Day, so it seems like a good day to tell you all that there isn’t a better group of comics fans anywhere!

I remember one compliment I got for a editorial cartoon. It was a cartoon about Henry Kissinger. Needless to say, it was not complimentary to him. But as often happens with really famous people, instead of being upset, they thank you for your interest. So I got a letter from the Secretary, and I could hear it in his German accent. He thanked me for the cartoon and said, “It gave me cause to smile.” 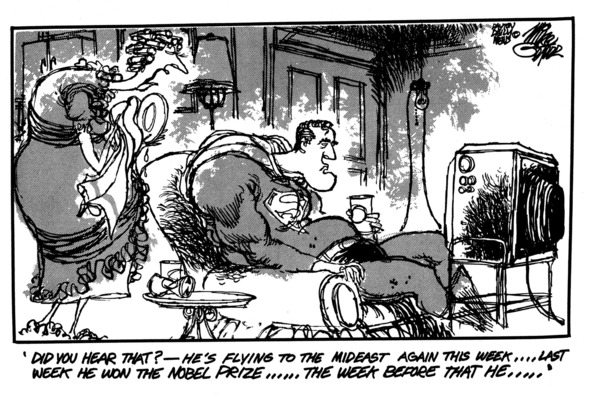 Here’s one of my favorite comic strips from last year–it features Jughaid actually complimenting Miz Prunelly! But he must have an ulterior motive…

I’m sorry to realize how few compliments are contained in most of my cartoons, but here are a couple from some rodent cousins: 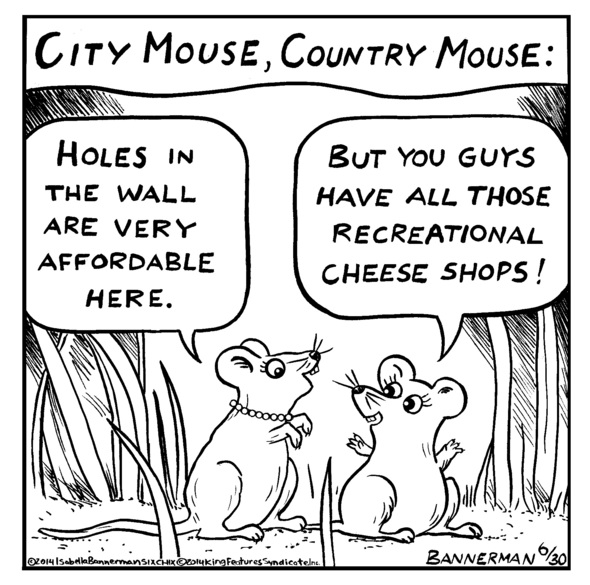 Who makes these days up? I’ll have to bear this one in mind though as it is my other half’s birthday. I better be extra nice to him! 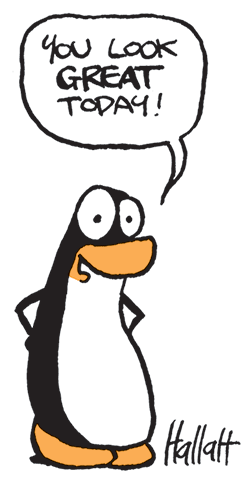 It doesn’t happen often, but Dethany did actually receive a compliment from her mother.

With Alice Mitchell, a little compliment goes a LONG way! 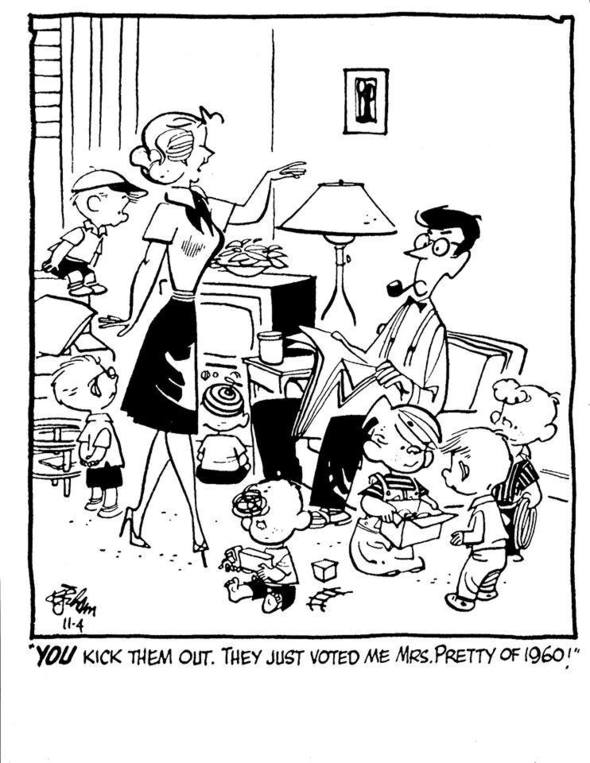 Always great when someone compliments your work, but even nicer when you find out you made them happy in an unexpected way. Here’s the Sally Forth strip for 10/2/2017 followed by an email I received after it saw print. 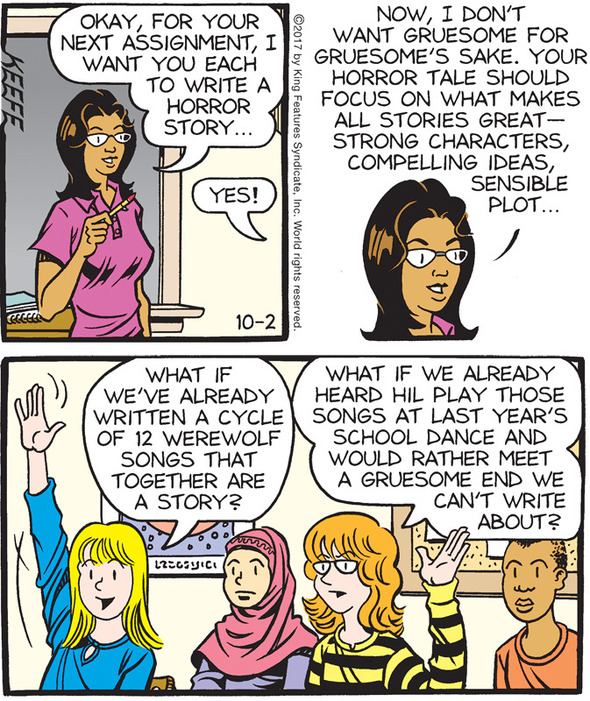 ?
Wonderful to see you including a girl wearing a hijab in Hil’s class in this morning’s comic! I read your comic strip every day, and as a mother of a girl who wears a hijab, I admire your effort to include girls like her.
Thank you for your thoughtfulness.

First, may I just say all you Comics Kingdom readers look very nice on this National Complimentary Day…

Well now, two seasoned (read: old) editorial cartoonists like Steve and I have long gotten used to receiving plenty more raspberries than compliments. But what fun doing a comic strip is. We’ve found readers and fans of the funnies are far more generous with their kudos — we’re still not used to that yet.

Here is an especially complimentary email we received regarding a strip from the two weeks the Kudlicks spent in Paris. It’s positively blush inducing.

Today’s Dustin really caught my eye–and the artwork wouldn’t let it go! It is one of the best comic strips I have ever seen. First the gag–phenomenal! Both funny and true! I was in Paris last year and the fashion sense of the French really puts us Americans to shame!

But the artwork! Wow! There is a wonderful compositional flow from left to right, with the unseen man with a cigarette bringing the viewer’s eye back into frame. The characterizations of every figure in the panel is accurate and wonderful. The not-unfriendly but definitely aloof expressions of the French passers-by and the more vacuous look of the American family on vacation.

But what strikes me most is the attention to detail! Everywhere I looked, I saw corners that could be cut, but none were! The woman-with-a-dog’s hand has all four fingers, with her first finger raised slightly above the rest. The cigarette’s butt end is visible inside the hand of the man with cigarette. Even the lines in the boy’s telescopic selfie pole! And the background! The wonderfully rendered apartment buildings, the Euro cars, one with a man in it–you can even see he is wearing a European driver’s cap! And yet even with such amazingly intricate detail, the overall artwork is CLEAN with the figures in the foreground standing fully apart from the background!

I must confess that I have not been a regular reader. The strip appears daily in the Houston Chronicle, which I receive. Sometimes I read it, but if pressed for time, I don’t. But after today, I will not miss another Dustin strip and you can count me as a huge fan!

With my very best regards and wishes for your continuing success,