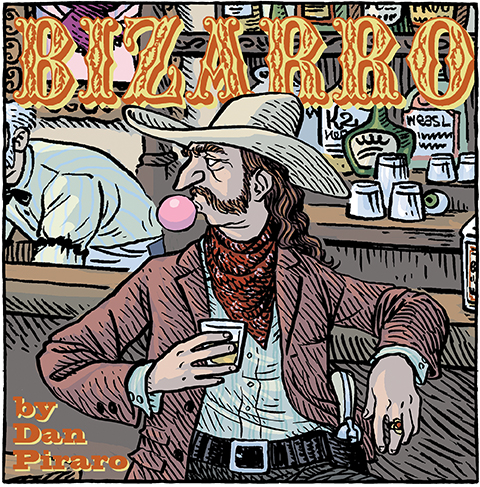 I NEGLECTED TO POST MY WEEKLY ROUNDUP LAST SUNDAY SO THIS SUNDAY FEATURES TWO WEEK’S WORTH OF CARTOONS. A QUICK GLANCE AT MY CALCULATOR SAYS THAT’S MORE THAN A DOZEN CARTOONS!

(Don’t be afraid to embiggenate these cartoons by clicking any hat or shoe in any drawing.) 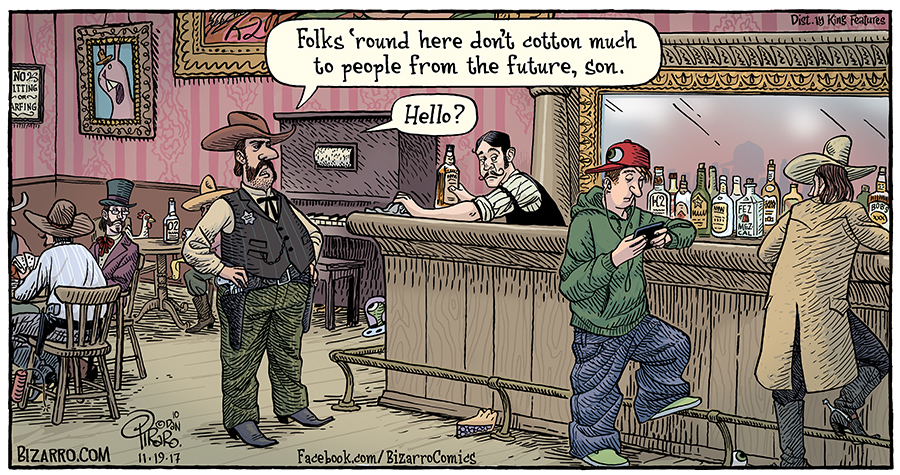 Bizarro is brought to you today by Religious Questions Answered.

Have you ever tried to talk to someone who is so engrossed in their mobile phone and/or earbuds that they do not recognize your existence? The Old West sheriff in the above cartoon feels your pain but at least for him, it is only temporary. Once he runs that one slacker from the future out of town, life returns to normal. If you live in the present, however, as the overwhelming majority of people alive today do, it is a routine and daily experience with no end in sight. It’s not always easy being from the present. 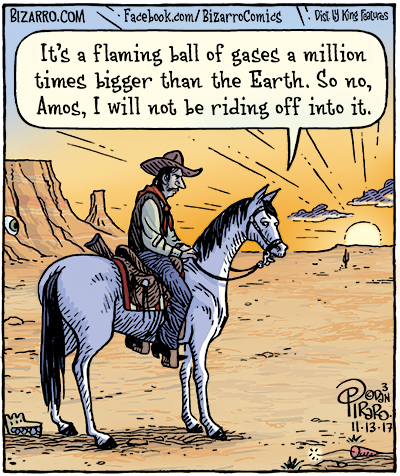 What the hell is this? Another cowboy gag? Is Bizarro a cartoon strip about the Old West? Sometimes. And also 10,000 other things.

For my foreign readers or those who are simply not familiar with common expressions used in Hollywood westerns, “riding off into the sunset” was a phrase used at the end of the story as the hero rides off toward the horizon after saving the town from those bad guys who were taking advantage of everyone and making them miserable in one way or another. Washington D.C. could use one of those heroes right about now. 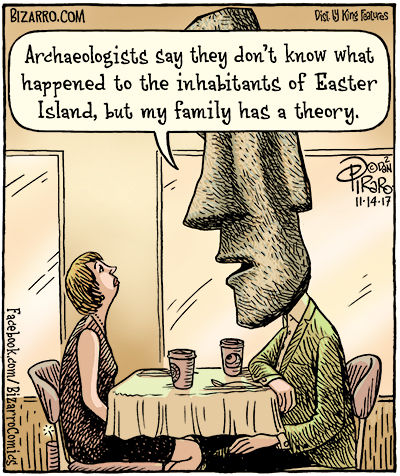 If you think you recognize the character speaking in the above cartoon, you’re right. He’s from Easter Island, the place 3,686 kilometers (2,290 miles) off the coast of Chile. It is so named because it was where Jesus rose from the dead on Easter morning, even though he was executed in Jerusalem, over 10,000 miles (16,000 kilometers) away. Somehow, he managed to get there in only three days, around 1900 years before airplanes were even invented. That’s why it is considered a miracle. 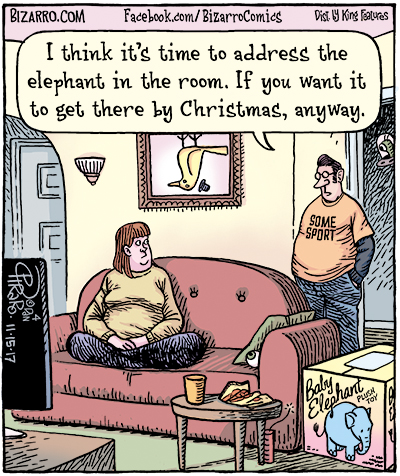 This time of year it is important to remember to address and mail gifts early to avoid the holiday rush. Did I use the word “holiday” here instead of “Christmas” because I am a proponent of the so-called “War on Christmas”? Yes. Does that mean I hate Christmas? I do, but not as much as I hate Bill O’Reilly and love tormenting him in any small way possible.

By the way, if you’re a gift-buying sort, I’d love love love it if you considered one of my incredibly cool coloring books (lots of folks are really into the mind-calming activity of coloring these days) or something from my store.  If you want to spend a little more money on something unique and super nice, try one of my signed-and-numbered, limited-edition prints (and some original art) from a fancypants art gallery. (The elves at Rancho Bizarro will really appreciate your support because they work hard all year producing this stuff and I use the profits from sales to feed them. Starving an elf is no way to start the holiday season.) 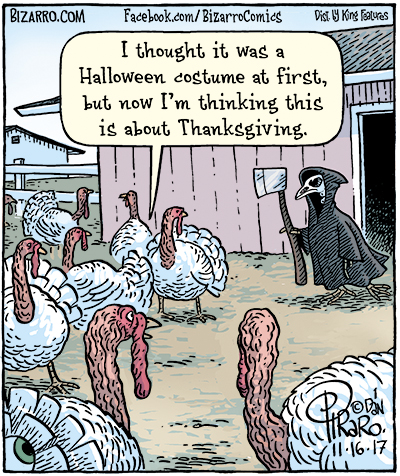 Unfortunately for turkeys, this time of year keeps The Grim Gobbler pretty busy. Not quite as busy is The Grim Tofu. 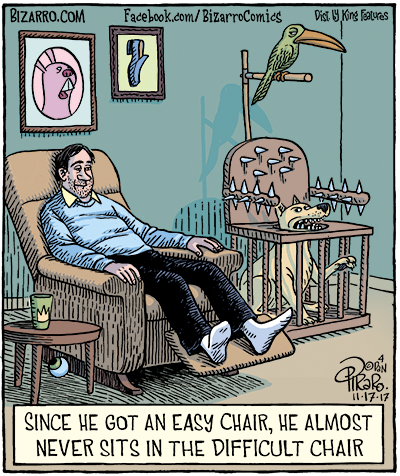 Just one of the many benefits of the easy chair vs. the difficult chair is that one’s clothes last longer than they used to. One also saves on shampoo. 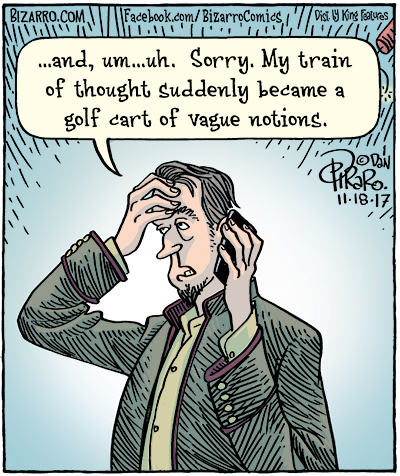 I thought my brains were scrambled before, but since I’ve been studying Spanish these past 11 months, I realize I didn’t know how good I had it. I still can’t speak Spanish but now I can’t speak English anymore, either. (I had to type this paragraph three times to get it right.)

Do you hate terrible things and love good things? If so, and you consider my cartoons to be in that second category, please consider the satisfying act of supporting my efforts via a one-time donation or a monthly pledge. I make my living from newspapers and they aren’t doing so well these days. Thanks a llama! 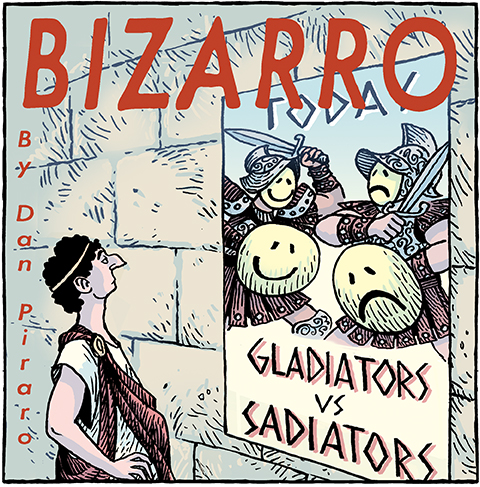 HEY, THIS IS ANOTHER TITLE PANEL, WHICH MEANS WE’RE NOW HEADING INTO THE SECOND WEEK OF COMICS!

Do you get the “Gladiators vs. Sadiators” cartoon above? They were the emojis of ancient Rome. 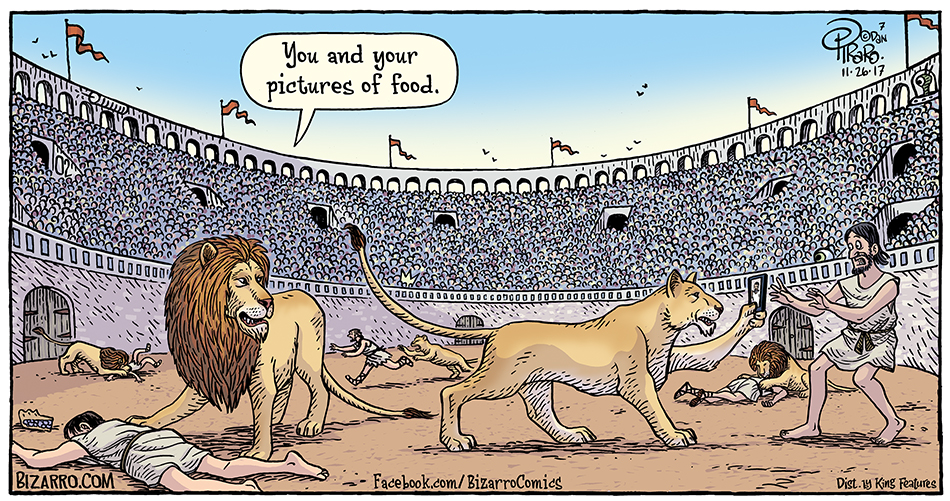 One of the many amusing things they did in ancient Rome was to have public events in which people and animals would fight to the death. Even though it was not the most prevalent form of these bloodsport events, the most famous version is when they would feed Christians to the lions. Most people assume this was a form of religious persecution but in fact, it was because lions preferred the taste of Christians because of their bland diets; lions found members of other religions to be too spicy. 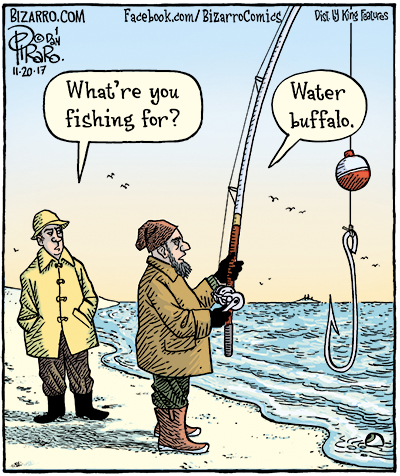 If you’ve eaten water buffalo and didn’t like it, it may be because you live too far from the coast. At least, that’s what people always say when I tell them I can’t stand any kind of seafood. 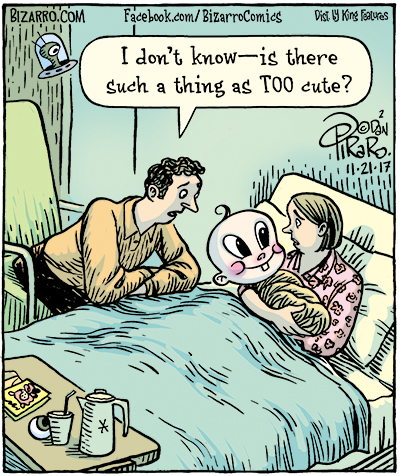 What was most certainly not cute was getting that head through the birth canal. (The last word in that previous sentence brings to mind gondolas, but in a very different context.) 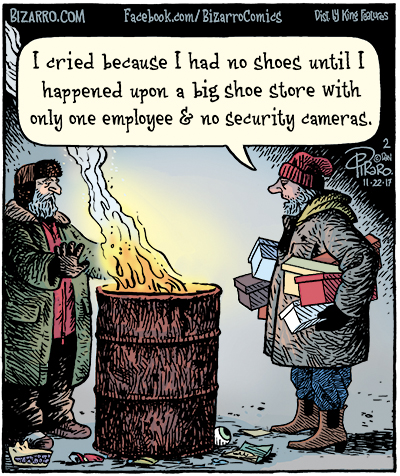 Some readers didn’t get this gag and I suspect it is because they are not familiar with the common expression on which it is a riff: “I cried because I had no shoes, until I met a man who had no feet.”  That’s a shortened version of the original expression which ended this way… “because he was Canadian, where they use meters.”

(Yes, I know Canadians spell it “metres” but I’m American and was writing it from my point of view.) 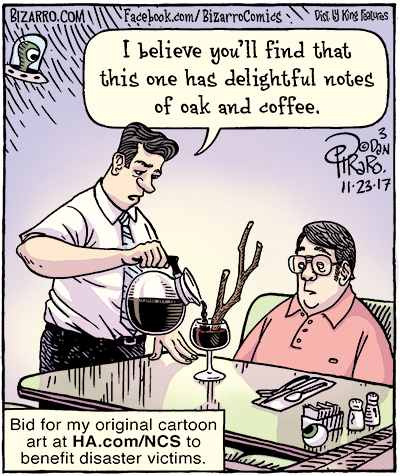 The National Cartoonists Society is having an online charity auction of lots of cartoon art from many professional cartoonists. The proceeds will go to various disaster relief funds like those in Mexico City, Puerto Rico, Houston, etc. (Disasters of every sort are something we are not in shortage of these days.) I’ve donated the original ink drawing from the cartoon beneath this blue sentence, which has long been one of my own favorites. Please consider going here to view what’s available. Much of the cartoon art up for auction normally sells for many hundreds of bucks and some typically retail for over a thousand, so this is a terrific way to snag one waaaaay cheaper. 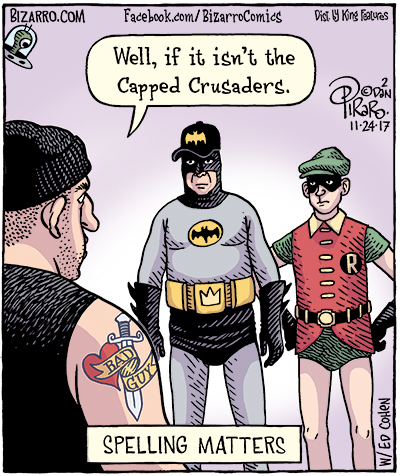 Capes are so much cooler than caps, but caps never get slammed in the door of your whatever-mobile as you race off to fight crime, nor get accidentally dipped in the toilet. Which, as a matter of fact, is why Robin’s cape is yellow. 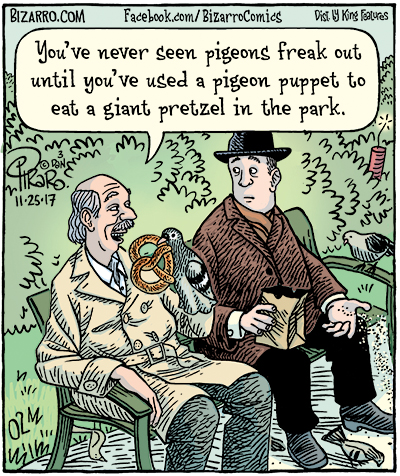 I once ate BBQ in front of my dogs while wearing a dog hand puppet, but that was only because there were no napkins and I didn’t want to get my hands dirty. Afterwards, I let the dogs eat the hand puppet in spite of the eerily cannibalistic nature of it.

That’s the whole story for this week, Jazz Pickles. Thanks for reading this far and until next time, be happy, be smart, be nice, and resist fascism and ignorance.