Ask A Cartoonist: On Writing

The best comics are a combination of great writing and great art– and, moreso, a place where visuals and words combine to make a language of their own. This week, I asked our cartoonists to talk about writing and writers and what writing means to them.

Last year, I did a short series of strips about “famous Dingburg writers”, all of whom are really parodies of real, famous writers.

I teach writing (and drawing) for comics in my “Storytelling” class at the School of Visual Arts in New York. Though I don’t always follow the rules myself, I teach my kids about the classic “3 Act” method of story writing. Here it is in a nutshell, called the “story arc”:

– The situation you start in (a place and time)

– A reversal or conflict stands in their way

– There’s a climax where your main character needs to make a choice and take action, in order to reverse the thing that stands in his/her way. (For instance, a wrong choice leads to tragedy, a right choice leads to happiness)

– Resolution–you’re back where you started, but changed now–wiser, enlightened. (Or ruined)

Like I said, I usually do my storytelling in a more fluid way, but it helps to remain aware of this standard structure so you can pinball off of it.

Here is my story about writing.

I was enjoying my early success at cartooning when I read an article by a writing teacher who said that success in cartooning depended on good writing, that people reading the comics are more interested in what’s being said, that good writing makes the best comic strips. The minute I started college I signed up for some writing courses.

He jumped from his chair an yelled, “COMIC STRIP!?” and stomped off. I was no longer his favorite student. That didn’t change my mind I went on to try and get my best writing in my comic strips and it paid off. At the same time I was editor of several magazines and wrote about a dozen books. Writing has been an important asset to my success.

Doing three strips single-handedly, people assume that I spend most of my hours at my drawing table. The truth is that I work extremely fast, which is something I learned from my time as a newspaper staff artist in my early twenties. Most of my workday, then, is actually spent writing; I estimate 75% of my time is devoted to that side of the equation.

I try to create gags that are completely dependent on the specific characters of my strips. I imagine conflicts that force them to act, and see what happens. Often they surprise me and go in directions that I never planned. Those instances frequently end up being my strongest material.

I’m a cartoonist who believes that good writing carries a strip much further than good artwork. My favorite thing about writing is how it tends to surprise me. Often, an idea that I think will go in one direction ends up going in a completely different direction. The best is when I figure out a gag that I didn’t know I had in me. Often that comes from reading – I’ll read an article or book, highlight an inspiring passage, and then write a strip about it. Whenever someone asks me for writing tips, I always tell them to read, read, read.

I don’t have a favorite subject to write about, but I always love when an idea sparks a storyline that I can build on. I tend to work best when I work up some momentum, so that’s why I love doing storylines. I try and do at least one or two per month.

I think as far WRITING goes, DENNIS would say “The LESS of it, the better.” 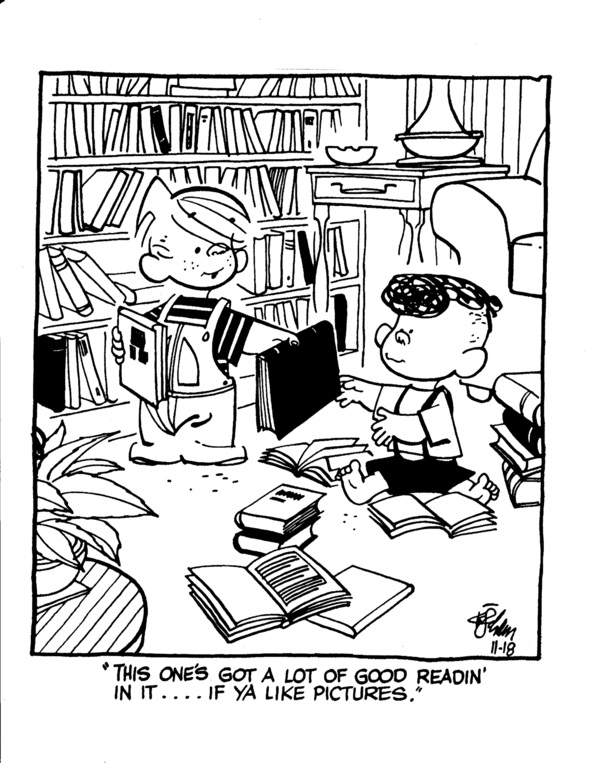 This is one of my favorite Sunday Pages from last year and the topic of this strip is about how to write an interesting story. Little Tater may be a newspaper reporter one day. After all, he’s already got the 5 W’s down pat! He knows the Who, What, When, Where and Why of gathering a good news story! The future of journalism is bodaciously bright!