News Around the Kingdom: SHELTER STORIES 2017, AN OPEN STUDIO AND A VETERANS TALE CONTINUES

We hope you've been following Patrick McDonnell's wonderful "Shelter Series" in his MUTTS comic strip all this week. As he does each year, Patrick is spreading awareness of National Animal Shelter Appreciation Week, sponsored by The Humane Society of the United States, by dedicating a week of strips to the cause. From November 5-11, MUTTS is recognizing the beautiful folks who foster shelter animals.  This year, the strips feature a little dog who keeps on barking... Click here to start reading it from the beginning. 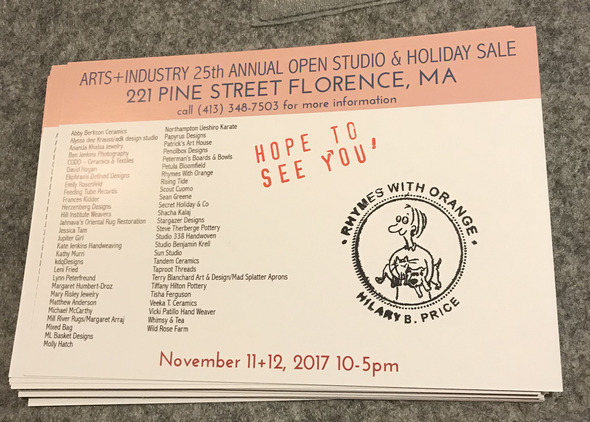 If you're anywhere near Florence, Mass., don't forget you've got an invite from Hilary Price to stop in this weekend for her Open Studio event. It's this Saturday and Sunday, Nov. 11 & 12, 10am-5pm.  221 Pine St. Florence, MA 01062. Hilary will be signing copies of her new Canine Comics book. If you can't make it and you still want the book, you can order it here: http://www.indyplanet.us/brands/hilaryprice/

As we arrive at Veterans Day 2017 on Saturday, please be on the lookout for tributes from some of our cartoonists. Vets are the focus in BEETLE BAILEY, DENNIS THE MENACE, HI AND LOIS, MALLARD FILLMORE and BARNEY GOOGLE AND SNUFFY SMITH. You can read them all right here on ComicsKingdom.com.

Did you know this? John Rose tells us on his blog that for several years in the early 1940s, both Snuffy Smith and Barney Google were fictionally in the military in our comic strip. Snuffy was in United States Army and Barney was in the United States Navy. So John makes sure to do a special salute every year. Check out his blog to see some of his past work. 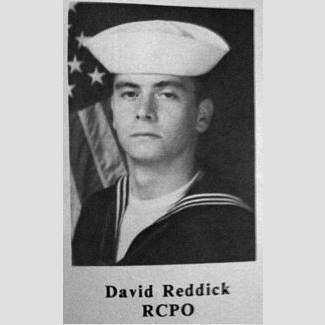 INTELLIGENT LIFE cartoonist David Reddick is a veteran of the U.S. Navy

Speaking of Veterans, we're also pleased to say that David Reddick (who is a U.S. Navy vet himself) is getting a ton of positive feedback from fans online and on his Facebook page for the Veterans series he started on Monday. Check out the series so far starting here: https://comicskingdom.com/Intelligent/2017-11-06. It continues next week, so STAY TOONED! 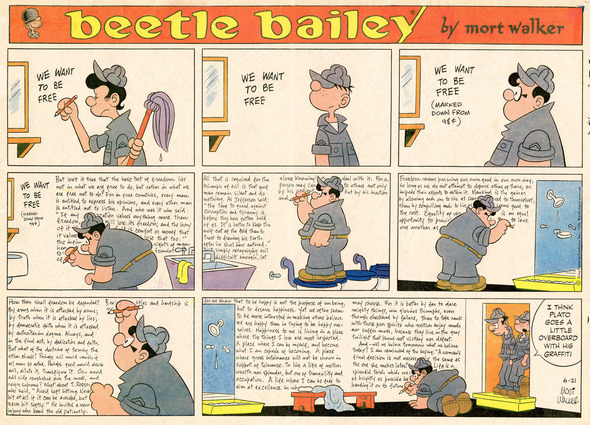 This week in Part 2 of his BEETLE BAILEY Timeline series, Brian Walker focuses on 1970 by talking about philosophy in the comics. Naturally, Camp Swampy's
resident philosopher, Plato, is front and center. This Sunday episode gives fans a taste of Plato's so-called "graffiti." 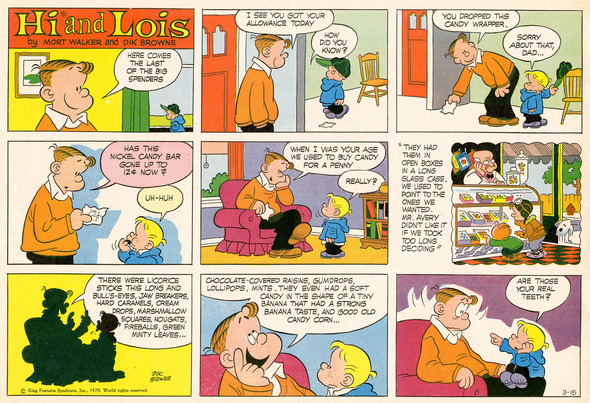 Over in the 1970 Timeline Part 2 series of HI AND LOIS, Brian shares a Sunday page in which Hi reminisces with Ditto about the penny candies he used to love when he was his son's age. And since candy seems to be a sweet spot for everybody, Brian decides to look back into pop culture to see what Hi would be eating if he were a kid born in a different decade. How many of these candies do you know? Check it out.