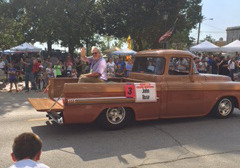 John says, “It was a lot of fun being a grand marshal in the Toonfest Parade,
especially in a bodacious truck like this one!”

As we mentioned a few weeks ago, BARNEY GOOGLE AND SNUFFY SMITH cartoonist John Rose was honored to be asked to attend the annual Walt Disney Hometown ToonFest in Marceline, Mo., as Guest Cartoonist along with Barbara Dale, Mike and Patty Peraza, and John Glynn. All five cartoonists gave individual presentations about their craft; served as grand marshals in a parade down Marceline’s Main Street USA; and received career awards for our contributions to cartooning. Check out John’s blog to find out all the other cool things he did and saw at the ToonFest — and to see his photos from the event! 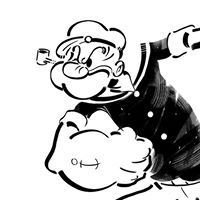 On another front, we’d like you to stay tooned on Mon., Sept. 25 to the Popeye and Friends Official Channel on Youtube. Why? Because it’s NATIONAL COMIC BOOK DAY! Popeye is celebrating with a new Popeye AniMinute and a fun contest on his Facebook page featuring IDW Publishing’s cool series of Popeye Classics. Better check it out. Look for the reveal on Monday — and get your camera out… (Nope. That’s the only hint we’re giving you
about how to win!) 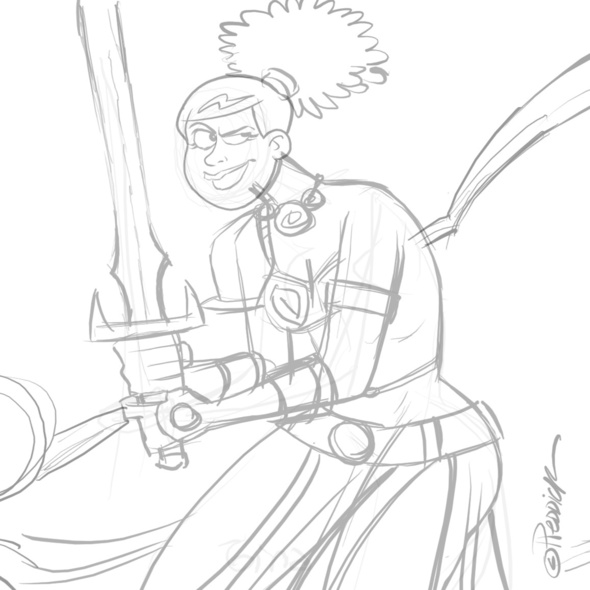 INTELLIGENT LIFE cartoonist David Reddick keeps on having fun with his sketchbook, including this piece of Gwen as warrior princess for an upcoming Halloween storyline. See what else he’s up to in his blog. 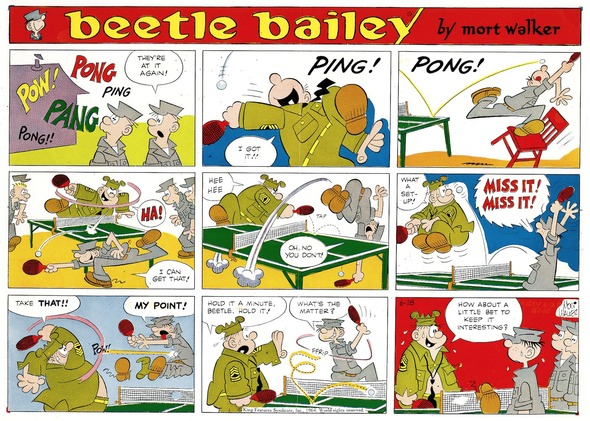 In Part 3 of his 1968 Timeline series for BEETLE BAILEY, Brian Walker focuses on Jerry Dumas, who began working as Mort Walker’s assistant in 1956. In a 2010 interview, Jerry described their daily routine at Mort’s home studio during the 1960s, revealing some details that explain why Brian chose this particular Sunday page for this week’s blog. Check it out 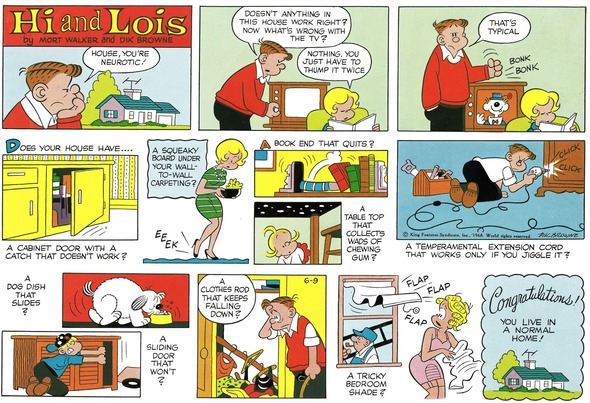 In Part 3 of his HI AND LOIS Timeline series for 1968, Brian cites Mort Walker’s 1975 Autobiography, Backstage at the Strips, to explain his choice of this week’s Sunday page. Home is where the heart is and it’s obvious from this strip what kind of home Mort Walker and his growing-up family created during their formative years in Greenwich, Conn. Read all about it in Brian’s blog.

Bizarro – Big Foot and Other Absurdities

And finally, in his BIZARRO blog this week, Dan Piraro does his usual amazing job of ranging his thoughts all over the place, from Big Foot and his relationship to our President to dogs from group therapy to costumed mascots. Oh, and don’t forget the floaters in the eye. Huh? If you don’t get it, just go check out Dan’s always hilarious and thought-provoking blog.