News Around the Kingdom: A NEW BOOK, A CARTOONING WORKSHOP AND A 10th ANNIVERSARY

This past week, FUNKY WINKERBEAN cartoonist Tom Batiuk was profiled in the Seattle P-I ahead of the publication on Sept. 24 of a new book, Lisa’s Legacy Trilogy. Published by Kent State University Press, the trilogy is comprised of Prelude: Lisa’s Story Begins, Lisa’s Story: The Other Shoe, and The Last Leaf: Lisa’s Story Concludes. Click here to read the Seattle P-I article. 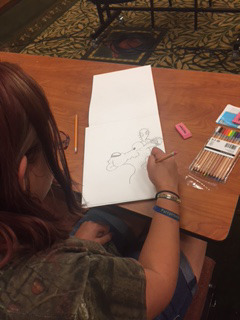 BARNEY GOOGLE AND SNUFFY SMITH cartoonist John Rose conducted a Snuffy Smith Children’s Cartooning Workshop Sept. 9 at the Bridgewater Farmers Market in Bridgewater, Va. As you can see, Rose taught the children how to draw some of the characters from his popular comic strip, as well as other characters.

ARCTIC CIRCLE cartoonist Alex Hallatt is celebrating her 10th anniversary in syndication. Her blog presents the first week of the Arctic Circle comic and features some of her favorite strips through the years that show how her characters have changed and grown over time. Check it out here.

ON THE FASTRACK cartoonist Bill Holbrook informs us that Dethany has produced a new video for September. To check it out, click here. 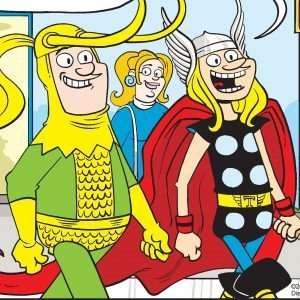 INTELLIGENT LIFE cartoonist David Reddick has been having fun with his sketchbook, including this piece of Skip & Mike doing a little cosplay in an upcoming strip. See what else he’s up to in his blog. 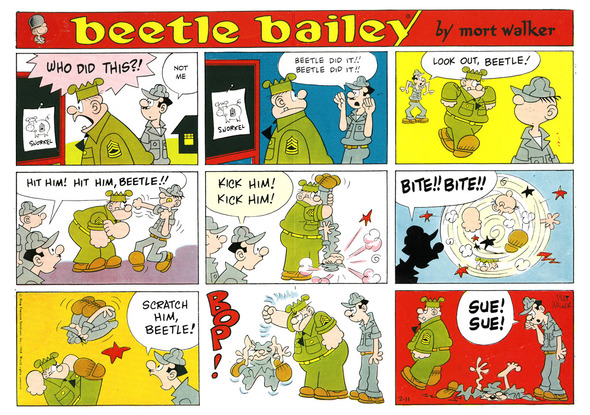 In Part 2 of his 1968 Timeline series for BEETLE BAILEY, Brian Walker shows a particularly funny example of how Beetle’s attempts at humorous artistry get him into big trouble with Sarge. Brian delves into cartoon violence — a recurring theme in Beetle Bailey since Sarge regularly pummels his PFC only to have him spring back for the next round.. Check out the blog. 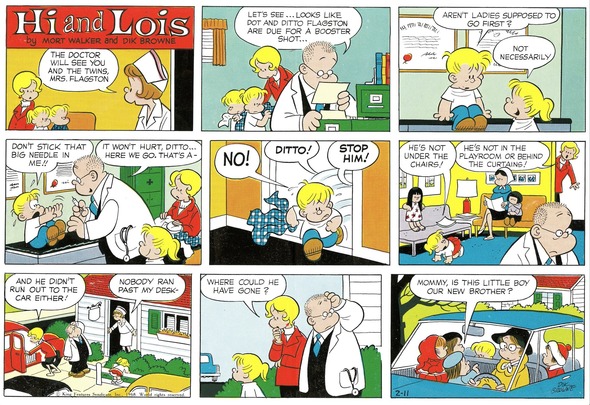 In Part 2 of his HI AND LOIS Timeline series for 1968, Brian focuses on 7-year-old Ditto Flagston. Described as a “lovable little monster.” Ditto earns the moniker in this Sunday page when he runs out of the doctor’s office to avoid being stuck in the arm by what appears to him to be a giant hypodermic needle. Typically, the episode ends with a twist. Check out Brian’s blog to find out what happens. 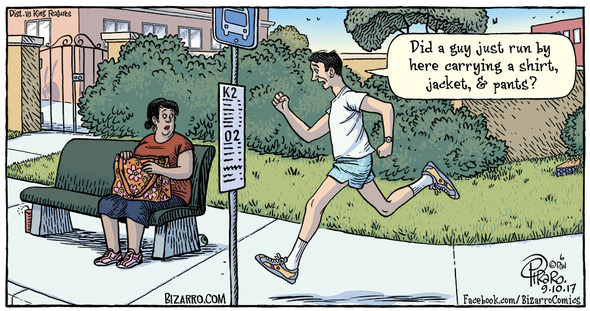 And finally, in his BIZARRO blog this week, Dan Piraro predictably pulls no punches when it comes to politics, opines about absurdist humor and shares some funny stories about his penchant for drawing Medusa cartoons… Check out his always hilarious and thought-provoking blog here.