First off, we’re sending our best wishes to everyone affected by Hurricane Harvey, and to remind readers out there that there’s still plenty of need for help– please give to a relief organization of your choice, if you can!

Secondly, in the annals of “weird holidays you didn’t know existed,” today is FRANKENSTEIN DAY. Even funny people are afraid of things, and this week, I asked our cartoonists to talk about fear: the things they’re afraid of, and the scary stuff they love the most. Here are their answers:

This is a subject that is dear to my heart-monsters! I had quite an imagination as a kid, thinking of all sorts of creatures living in the shadows of my apartment at night. Every closet had to be closed before we went to bed in fear that, if left ajar, “something” could come through and drag me away.

I was never really afraid of monsters or creepy crawlies, although I spent a lot of time watching horror films and reading horror literature. To this day, it is a favorite genre of mine.

I wanted to touch upon it in some way and put it into CURTIS, but none of the characters could actually carry such a theme. In my drive to do something original, I thought outside the box and came up with this idea.

Instead of a zombie the fed on flesh, why not have one that is an annoying houseguest. These ‘roommates’ show up from time to time, and is one of my more weird Sunday pages. 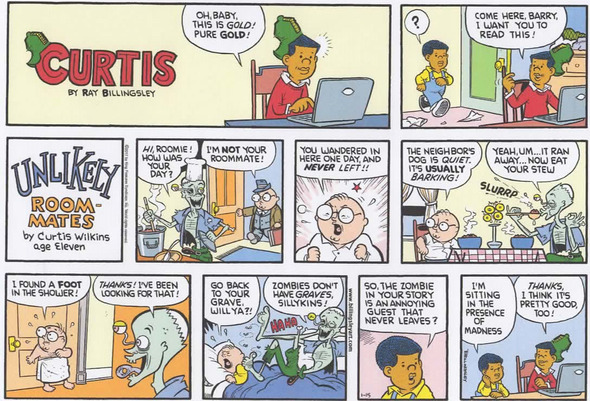 All my life I’ve been mortally afraid of spiders, and house centipedes— especially house centipedes. I’m so obsessed with them that I did a graphic short story titled, “The Power of Centipedes” (published by Pulp Literature Magazine). Here’s a drawing from the story… they don’t look this cartoon-cute in real life! 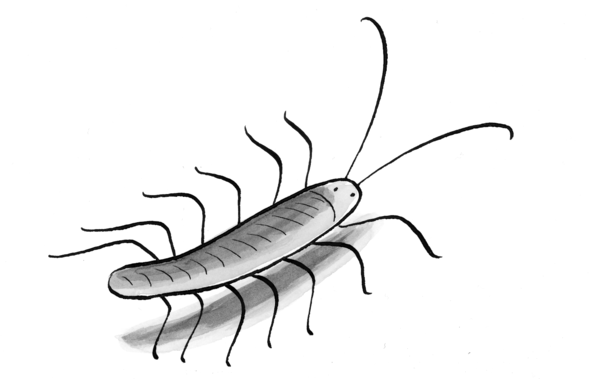 I don’t have anything I can add to this. It speaks for itself.

In Hootin’ Holler about the only thing they have to be afraid of are angry bears and Ol’ Snort, the wild boar. And it seems Snuffy and Lukey run into both of them pretty frequently!

Tales of Terror?! Now this is right up my alley! I come from a horror / sci-fi background! Having grown up with shock theater on tv and reading Famous Monsters of Filmland magazine, I truly enjoyed monster films. Certainly the original Universal Monsters – Frankenstein, Dracula, the Mummy, the Wolfman, the. Feature From the Black Lagoon and more all thrilled and chilled me!

My all time favorite was / is the original 1933 version of King Kong! While it did not scare me, it did inspire me to draw as I tried countless times to recreate the images I saw in that film! Encouragement from my mother and I was set upon my path!

Decades later, I hoped to break in to the independent comics scene in the early 90’s and self published 3 comics filled with horror and sci-fi short stories!

Now that I create Mark Trail, well, there’s not really room for Monsters in the comic… or is there?

During the month of October I populate the Sunday strips with plants and animals that could be considered creepy and inspire thoughts of fear. Things such as spiders, frightening fish and even snakes will become subject matter for the weekly educational installments of Mark Trail – all stemming from my original love of monster movies!

Happy Frankenstein Day! I LOVE the scary stuff. When I was a tween, and well into my teens, I’d watch old horror classic films on “Creature Feature,” and stay up late for “Fright Night,” both presented every Saturday by “master of scarimonies,” Dr. Paul Bearer on WTOG-44 from Tampa/St. Petersburg, FL. I also had a mania for collecting “Famous Monsters Of Filmland” magazines (gad, what a nerd I am). I still prefer the old classic films over modern slasher and zombie movies. 1933’s “Frankenstein” and 1935’s “Bride of Frankenstein” are simply transcendent.

And though it features a zombie instead of a classic movie monster, here’s a fave strip of ours about the time Dustin took a temp job playing a zombie for a seasonal Halloween haunted house — and just for the kids, I threw in a (yikes!) scary killer clown in the background…

I always say there’s nothing more appropriate for FRANKENSTEIN DAY than a good ‘Shrunken Head’ gag! 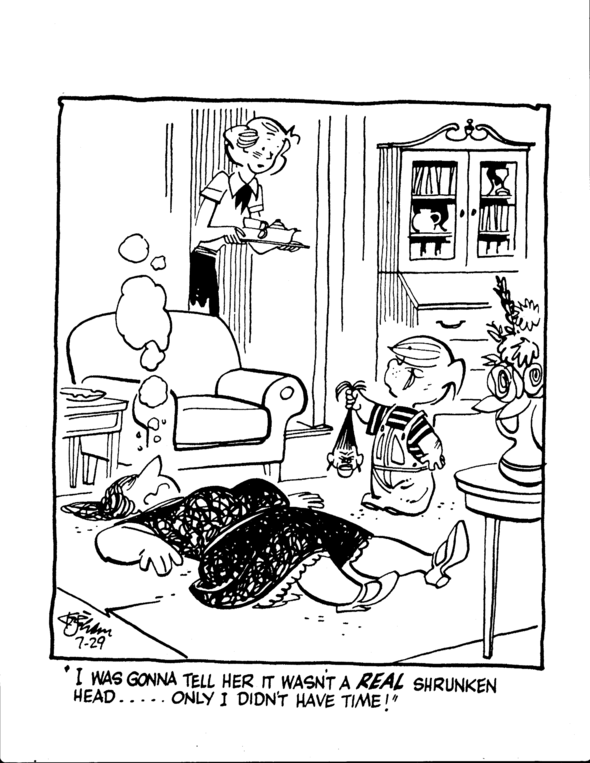 I’m a life-long Universal Monsters fanatic, having gotten hooked as a kid watching our local “horror host,” Dr. Igor on WQAD from Moline , IL. As the host of the local version of the syndicated Chiller Theater package of Universal horror flicks, the ol’ doc got me hooked on the cinematic creep shows featuring Frakenstein, Woman,Mummy, Dracula and the Creature from the Black Lagoon. “Uncle” Forry Ackerman’s Famous Monsters of Filmland magazine sealed the deal. My studio is full of vintage and reissue Aurora Plastics model kits of the monsters — and whatever other memorabilia I’ve stumbled across to add to my collection. There’s an entire shelf of nothing but Frankenstein! 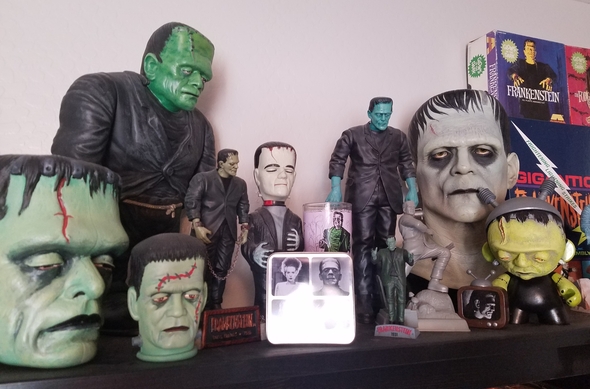 My longest commercial art gig was as the cover artist for Scary Monsters magazine — following in the footsteps of Famous Monsters. I created the covers for that mag for nearly two decades. It was a thrill to paint Boris, Bela and the other horror stars five times a year during that part of my career.

Last Halloween, I dropped in a Frankenstein reference in Rex Morgan. Rex had come home from taking Sarah shopping for a costume — and waxed nostalgic about his childhood Halloweens. This gave me an excuse to draw a classic vintage Frankenstein mask as a little thought balloon flashback image. As the Frankenstein monster himself might say, “Monsters — GOOD!”

Dethany loves all of the classic monsters, no surprise!

I tried my best to think of something I was afraid of as a child, and I couldn’t come up with something until it occurred to me that I was always afraid I wouldn’t get anything to eat. I was raised during the Great Depression and if there wasn’t any work, your family starved. I was the shortest boy in my class, and the bullies picked on me. I started exercising every day in our basement so I could defend myself, and I’d sneak around to avoid confrontation. It wasn’t until I joined the Army and could get anything I wanted to eat in the mess hall that I grew– almost five inches!

I was never frightened by “monsters”, especially movie monsters, as a kid. Like now, I just saw them as “special effects”– creations of filmmakers. I guess I took it to heart when my mother said, “It’s only a movie, it’s not real”. So for Zippy, Frankenstein is just another roadside attraction.