News Around the Kingdom: GWEN’S LATEST COSPLAY OUTFIT, HOPE FOR THE PLANET AND THE BEST OF THE BEST OF “SHOE “

Titan Comics has published The Best of Shoe to celebrate the 40th year of the popular comic strip from the three-time Pulitzer Prize-winning editorial cartoonist? ?Jeff MacNelly. It is the single? ?largest volume of  SHOE strips ever collected, and contains artwork from its beginning back in 1977 right up to the present and the work of Gary Brookins. Covering ?four decades of social history with wry commentary, bird puns and beer, this collection is packed with more than 680 award-winning daily newspaper strips, a foreword by Dave Barry, a backword by Mike Peters, a biography of Jeff MacNelly, a? ?history of the SHOE comic strip written by Susie MacNelly, and a? ?selection? ?of some of the strip’s funniest full-color Sunday episodes. The Best of Shoe (208pp – $29.99) is available at bookstores now and at Amazon.com. Check it out!

The Best of Shoe from Titan Comics

Following up her posts on her special series “An Inconvenient Truth” and her interview in the New York Times, ARCTIC CIRCLE cartoonist Alex Hallatt opines about Al Gore’s documentary, “An Inconvenient Sequel: Truth to Power.” Is there hope for our planet? Find out what Alex thinks in her always thoughtful blog. 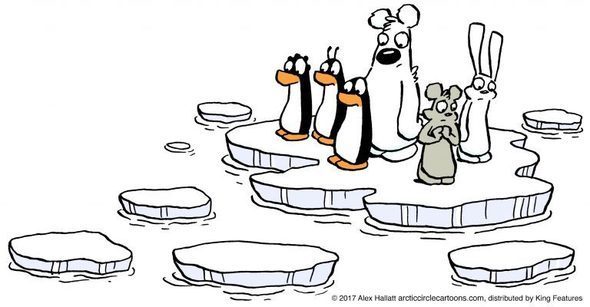 INTELLIGENT LIFE cartoonist David Reddick has been doodling in his Sketchbook again. This time, he has Gwen cosplaying as The Orville. Even if you’re not geeky enough to know what that is, look it up — and don’t forget to check out David’s cool blog posts. 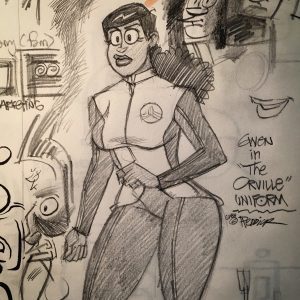 MARY WORTH writer Karen Moy posts a Sunday strip featuring Dawn, who has just started a new summer job at a medical practice before returning to school in the fall. Karen drops a subtle hint that all may not be smooth sailing with this young adult who is younger than she looks… Read on!

In the next 1967 episode in his ongoing Timeline series for BEETLE BAILEY, Brian Walker presents a Sunday page that reveals the relationship between Sgt. Snorkel and Lt. Fuzz, who share an office. Clearly, they have different personalities and things can get pretty tense sometimes. This strip demonstrates part of Mort Walker’s winning philosophy about his craft: “The main ingredient of humor is the revelation of human nature – its frailties, its reasoning power – and the interrelationships between characters. You can’t have a good story unless you have conflict.” Check it out in Brian’s always interesting blog.

Meanwhile, over in Part 2 of his HI AND LOIS Timeline series for 1967, Brian showcases the creators’ wonderful ability to build the story line rhythmically to its surprise ending. And let’s not forget Dik Browne’s wonderful ability to create innovative illustrations, color and layout for the strip. He was always pushing the design envelope and the result is art that is as refreshingly and beautifully modern today as it was when it first appeared. Check it out in Brian’s blog.

Finally, in his BIZARRO blog this week, Dan Piraro tries almost successfully not to talk about politics, shows some of his faves and explains what prompted him to create them. All mixed up with a smattering of historical facts, references to Barbie and Ken and the Creature from the Black Lagoon, and, of course, the ever popular Secret Symbols. Check it out in Dan’s always amusing blog!