Ask A Cartoonist: Tell us a joke!

Comics and humor have long gone together– after all, while there may be plenty of comics about action, adventure, and romance, it’s the funny ones that gave the funny pages their name.

This week, I asked our cartoonists to talk about their brand of humor and their favorite jokes.

When it comes to humor, I have always loved a good knock-knock joke. Apparently Doc Pritchart does, too!

When we moved back to the East Coast in ‘96, we took the kids to NY City for the day. My son, Jordan, who was 6 at the time, innocently asked if we were going to see the ENTIRE State Building. Needless to say, that made it into a daily panel not long after. lol! 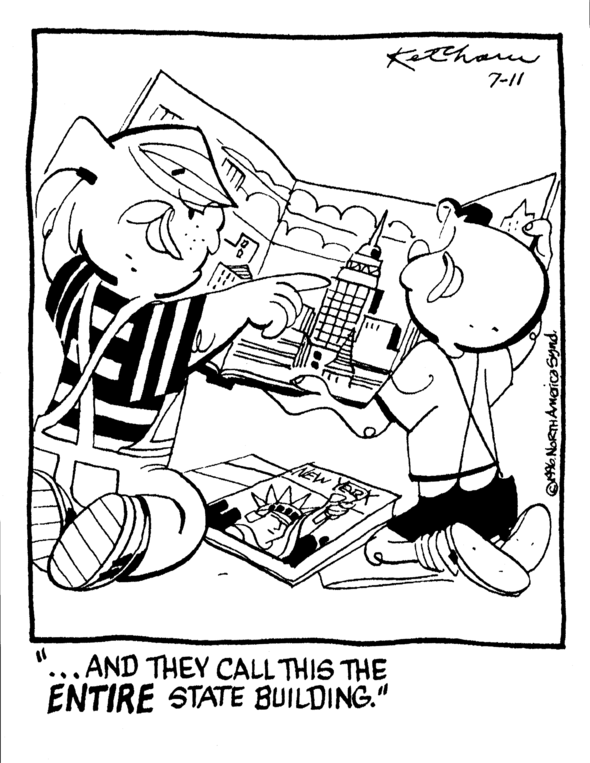 I don’t usually “tell” jokes in Zippy, often to the consternation of people not on my wave length. But I do tell jokes ABOUT jokes , to wit:

Here is one that is a little bit long, and it is best told in person, and in Italian, but here goes:

Once there was a little old man who was always cold. He always wore a heavy blanket around himself – even in the middle of summer.

(Here the speaker should wrap his arms around himself and shudder.)

Well, he was an old man, and so finally he died and went to heaven, and St.Peter let him in, but of course heaven is up in the sky, and it’s cold there, so the old man didn’t like it, so he called St. Peter and said, “You know – I wasn’t always good. Once, just for fun, I tripped my Aunt.”

And St.Peter said, “Well, that was a sin, but not a mortal one – so you can go to Purgatory.” And it was a little warmer there, but the old man still wasn’t comfortable. He was still always a little too cold.

So he called St. Peter back, and said, “You know, in fact, I didn’t just trip her, I actually cut her legs off with a chainsaw.”

St. Peter was shocked and said, “That is a very serious sin, and for that, you must go to hell.”
And so the old man went to hell, and finally for the first time, he was warm and comfortable.

But then, after a while, another person sinned and died, and the gates of hell opened, and from inside,
you could hear the little old man crying, “Close the door – there’s a draft!” 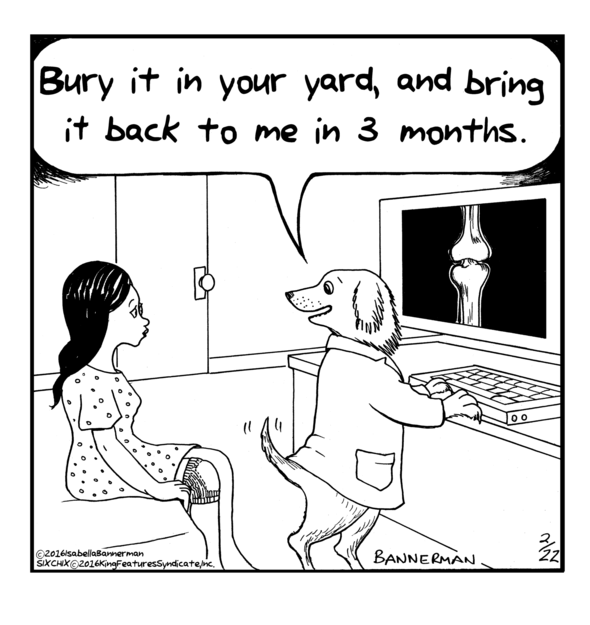 All time fave: “What did the zero say to the eight?”

My dad has always been a funny guy who loves to tell jokes and toss out quips. When I was a kid, he would entertain my sisters and I on road trips with various comedy bits that, like most dads, he would repeat regularly over the years until instead of laughing, we would roll our eyes and recite the punch lines along with him. One that stuck in my mind was when we’d drive past a sign that said “stop ahead,” he would say, “Keep your eyes peeled, kids. There’s a head around here someplace!” Many decades later I did this cartoon about it.

Like my dad, I’m fond of the off-the-cuff quip, but I rarely tell story jokes that other people have written. One exception is this one-liner that I read on the Interwebs somewhere which I confess I regularly tell to anyone who will listen: “Marriage is 90% yelling ‘what?!’ from another room.” So true, so funny.

?One of my favorites:

Q: What do you get when you cross a Jehovah’s Witness with a Unitarian Universalist?

A: Someone who knocks on your door for no apparent reason.

Q: What do you get when you cross two sheep with two kangaroos?

A: A pair of wooly jumpers.