Ask A Cartoonist: A Series of Tubes

Every now and then, I think back twenty years to what my life was like before the internet, and I struggle to figure out what it might be like now without it! After all, I talk to all of you online every week as part of my job, and I even met my husband on the internet! For one thing, I’m pretty sure I would have far fewer friends without the internet.

I asked our cartoonists to talk about how the internet has influenced their comics and cartooning life.

The interweb has expanded my Zippy readership enormously.

While I used to get a few fan letters (good or bad) once every few week before the web, I now get instant feedback (good or bad) from my 10,000 Facebook people and others via email every day. It doesn’t change how I go about doing a Zippy strip–that’s still a matter between me and my psyche–but it does give me the evidence that I’m not screaming into the void.

To show how I’ve changed in my attitude about all this connectivity, here’s a strip from 1995, when there wasn’t even a Zippy website (PS: I didn’t even know what “Hypertext web site” even meant then):

The Zippy website also provides a nice bit if extra income. Just go to zippythepinhead.com to see what’s there. Are we having html yet?

I remember my editor, Jay Kennedy, telling me about scanners and how some cartoonists (at that time) were beginning to send their comics to the syndicate digitally. It all sounded like rocket science to me and I thought that was something I’d never be able to figure out or learn. I finally got tired of paying FedEx to send my strips to King. (I wasn’t far ahead of deadline to feel confident that they would make it in time using snail mail) So I bought myself a scanner and just figured it out. I’m feeling the same way now about buying a cintiq in order to be faster and more productive…and paperless! I keep second-guessing my ability to master using a cintiq but I’m running out of space with about 25 years of original comics stuck in my office, spare rooms and closets.

Hank jumped on computer technology right from the start as can be seen in this 1983 panel. I remember him calling us into his office one day to watch him draw Dennis with whatever drawing program they had in the 80’s. He was always at the forefront of everything creative. 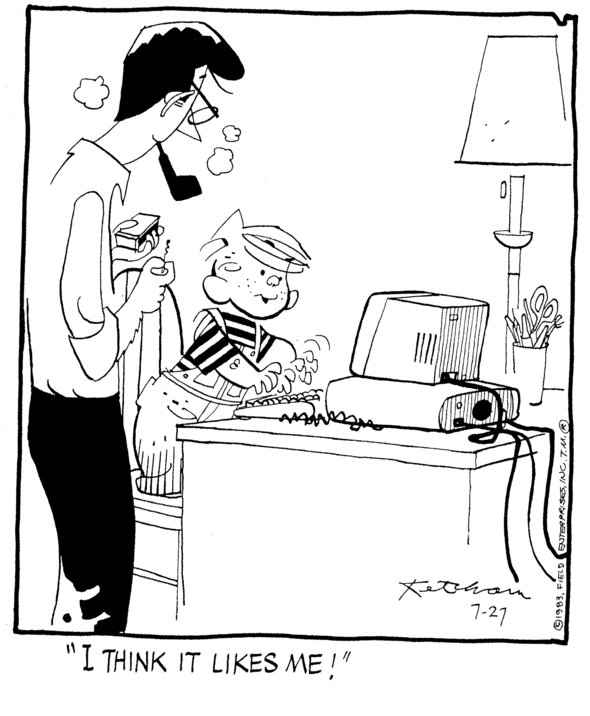 Audience response is one of the biggest advantages that the Internet had brought to my work. I include my Email address on every strip, because the feedback is invaluable in providing an awareness of what’s working and what isn’t. (Sure, there are trolls, but simple abuse is rare and easily ignored.) Before I got online I was completely flying blind:

It also opened up a whole new range of frustrations to use as material:

Whether it is through Facebook, Instagram (@snuffysmithguy), ComicsKingdom.com or our SnuffySmithComics.com website, my favorite thing about the internet is that it makes it easier to communicate with readers of the Snuffy Smith comic strip. I have not had too many comics over the years that refer to computers or the internet, but this one from a Barney Google visit in 2012 is one of my favorites.