Ask a Cartoonist: Take Your Poet To Work Day

It’s “Take Yout Poet to Work Day,” a day for sharing your favorite poets and poems with your colleagues. So, today, our cartoonists share their favorite poetry and their own poetic stylings with you!

Fun fact to know and tell: I began my publishing career as a poet. At the age of 16 (1960), I submitted poems to various poetry journals and had several poems published.

It may have even spurred me on to see my name in print in other ways, like cartooning— who knows?

Anyway, I always think of Zippy’s way of speaking as a form of free-form poetry, kind of like riffing with his vocal instrument. Dingburg (Zippy’s hometown) is full of poets, to wit:

I know it’s a little early for Thanksgiving, but here’s a comic with Dennis showing off his poetic skills and even managing to get through George Wilson’s tough exterior. 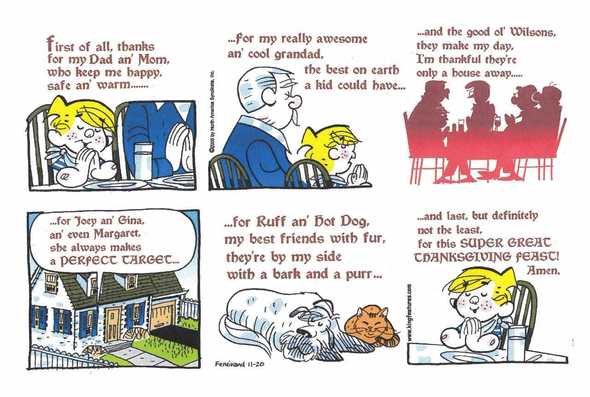 Jenny kiss’d me when we met,
Jumping from the chair she sat in.
Time, you thief, who love to get
Sweets into your list, put that in!

But my favorite poet is Wilfred Owen, an English poet and soldier, best known for his World War I poems about the horrors of the trenches and gas warfare. He was killed during fighting at Sambre-Oise Canal, France at age 25 — just one week before the Armistice that ended the war was signed. To commemorate the 100th anniversary of the start of The Great War, the UK’s Channel 4 made a series of WWI poetry recitals by some of Britain’s best actors. Here’s Christopher Eccleston (the 9th Doctor Who) reciting my favorite Wilfred Owen poem, “Dulce et Decorum Est.”

I’m not sophisticated enough to be a fan of traditional poetry but I loves me some Dr. Seuss. For a couple of years back around the turn of the century, I used to write very strange children’s poems in my spare time. I intended to one day publish them in a book for kids but have never gotten around to it. A small handful of them lent themselves to Sunday cartoons, however, and here are a couple of my favorite examples. 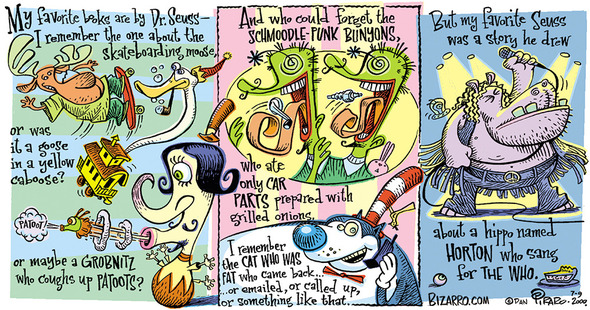 Bill Hobrook, Kevin & Kell, On the Fastrack, and Safe Havens:

When the cast of Safe Havens formed a band, Bambi was the resident songwriter. Here’s one of her first efforts at creating lyrics.

I was pondering the ol’ “if I knew then what I know now” possibilities of my life one day and ended up writing this strip.

In this Snuffy Smith comic strip of mine from 2015, Loweezy poetically prepares Jughaid’s school lunch!