Our friends influence us in all kinds of ways– good and bad. This week, I asked our cartoonists to tell us about some of their favorite friends– real and imagined– to write and draw.

Just to spice up their 41 year friendship, I like to do a strip once in a while where neither Zippy nor Griffy seem to know one another. It’s a way of getting to the essence of their relationship, I guess. I do the same with Zippy and his occasional wife, Zerbina, but that’s just to relieve the stress of married life.

Among all of my characters, the most complicated friendship is the one between Dethany and Fi in On the Fastrack. An important step in that relationship was the story arc where Dethany helped Fi find the resting place of one of her relatives. Thus began a road trip…

Dennis is VERY concerned about his social standing…….but I don’t think he’s convinced his mother. 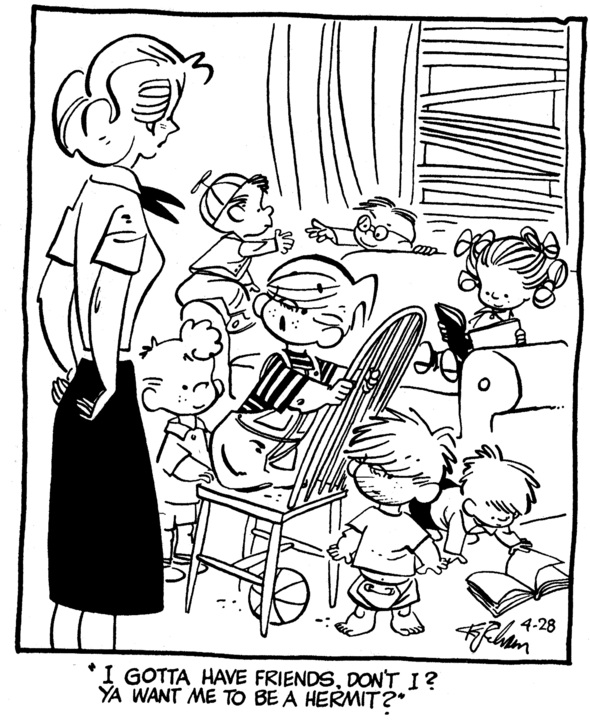 I like the friendship between Oscar and Frank. Sometimes Frank has to remind Oscar that the best friendships aren’t forged through likes on the internet.

My strip originated from some comics I had drawn of my friends to lampoon some romantic crisis or school/work fiasco. A few years back, I came across this drawing of my friends that I did when we were sixteen. I know we were sixteen because I recognize the hair styles and even some of the clothes. The arrow is pointing at me. 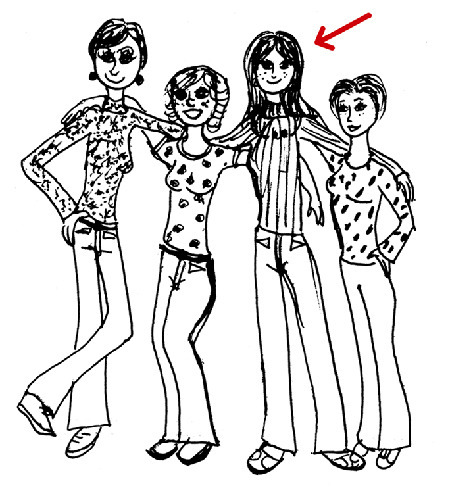 You hit the goal with your request about using my real friends to create the characters in Beetle Bailey. Almost all of my characters are real. I’ll just give you a few of the examples:

Beetle is my best highschool buddy, David Hornaday, who was very likable but lazy. When I went to his house to take him to a golf tournament his mother said he was still asleep. I went to his room and tried to wake him but he just rolled over and ignored me. I turned his cot over and dumped him on the floor. He just grabbed his pillow and went on sleeping. It took a few more shakes to get him going, but he was a permanent problem.

Plato was patterend after Dik Browne my partner on the Hi and Lois strip, He was a very bright and likable guy but he liked to play tricks on people and make them believe in some wild story. But he’d get highly offended if I tried to play the same tricks on him. Killer Diller was a roomate of mine once who wouldn’t go out to the movies or a snack with me. When I asked him why not he said he was only interested in getting laid. I asked him how he acomplished it he said he just walked down the street and said, “Want to have sex?” to every girl he passed. I said, “Don’t you ever get slapped?” and he said, “Yeah, but once out of ten I score.”

Miss Buxley was inspired by my wife Cathy. I used to watch her at parties and see people gather around her. She had such a sweet voice and nice laugh and I fell in love with her and asked her to fill a job assisting me as President of the Newspaper Features Council. We had meetings all over the country and coming back to CT from a meeting in CO, I was sitting in the plane’s first class when I heard my name softly uttered. I turned and it was Cathy who was sitting in second class with a vacant seat next to her. I moved back with her and we had a wonderful conversation all the way back to New York. We got married and loved each other for the past 35 years with Miss Buxley peforming for us.

Fellow Joe Kubert School Alum and friends Mark McMurray and Brian Bilter can be found sneaking into Sally Forth from time to time.

Here’s a panel from last fall as they head towards a comic book shop just as Hil and Faye are leaving. 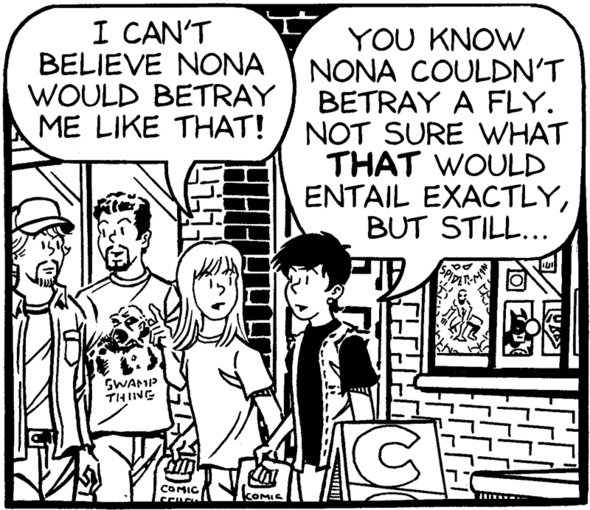 And another from a few years back as they follow the Forths for fireworks on the 4th of July.

Mark even went so far as to crash a Flash Gordon strip I did back in the day (when he had longer hair).

When will they pop up next? Only time will tell – so STAY TUNED!

Snuffy and Lukey are the best of pals and I really enjoy drawing strips that feature the two of them! Here is a recent favorite of mine featuring these two.