Ask A Cartoonist: When I Grow Up!

I know when I was a kid, I wanted to be a pyrotechnician…but my mom wasn’t so crazy about me trying to blow things up in the kitchen. Eventually I settled on the somewhat neater but nonetheless just as explosive work of editing!

This week, I asked our cartoonists about what they wanted to be when they were kids!

This is one of my all-time favorite Hank Ketcham masterpieces. Maybe this guy was a successful psychologist before he fell on hard times. 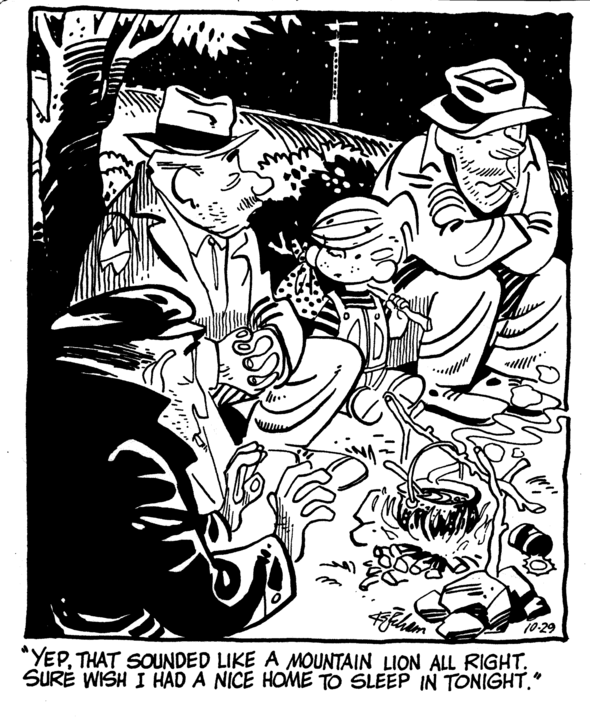 I was precocious. When I was four years old, I was reading the Sunday funnies and I saw a Li’l Abner strip about Sadie Hawkins Day. I thought it was just marvelous. I remember saying to myself that some person made this, and wouldn’t it be wonderful to have a job doing it when I grow up. I always loved the comics. Unfortunately I wasted my youth studying physics. I didn’t start drawing until I was 35.

In “Fastrack” I’ve occasionally flashed back to Dethany’s childhood, demonstrating that her interests have remained consistent over the years.

In “Safe Havens,” the cast has aged in real time as we’ve seen them grow from preschoolers to today’s 30-year-olds.

You can read more in the treasury!

As for me, of course, I’ve never *not* wanted to be a cartoonist.

I grew up (absurd) in the quintessential prefab American suburb, Levittown, Long island.
My ambition was to escape to Greenwich Village on the Long Island Railroad and become a Beatnik.

I always knew I wanted to go into the arts, but I didn’t know it would be cartooning. In college, I tried a lot of different things, like fashion illustration, fashion design, graphic design, and illustration (which became my major). I’ve always had a passion for cartooning and comics, and I had been drawing comics all my life. I realized I was progressively doing my illustration assignments in a cartoony manner. Eventually it sunk in that this was what I wanted to do with my life. So glad it worked out!

I have always wanted to be a cartoonist. The only other career I even considered at all was puppetry! I am a big fan of the Muppets and loved watching The Muppet Show and all the Muppet movies. In high school and college, a good friend of mine and I started our own professional puppet company called The Don And John Puppet Company. We build Muppet-style hand puppets and full body puppets, wrote our own scripts, built our own stage and performed on a regular basis for kids’ parties, scout banquets, parades, talent shows and more all over the northern Virginia area. It was truly a lot of fun! One highlight was actually meeting and talking with Jim Henson backstage at The Kennedy Center after seeing him perform! He was so kind and friendly and we were both in total awe of him! My puppetry partner Don, who is very talented, went on the become a professional puppeteer (http://www.dbpuppet.com) and I became a cartoonist. I have no regrets, I truly love being a cartoonist, but I have a lot of fond, fun memories of those days!