Ask a Cartoonist: Now That’s What I Call Music!

I know it’s not uncommon for me to turn on some tunes while I’m working at the King Features New York office, and I got to wondering about what kinds of music *cartoonists* listen to while they work– if they do at all! This week, I asked our cartoonists to talk about their musical influences and what role music plays in their lives and comics!

I was the singer for a new wave band around 1980 and have performed both comedy and serious music in clubs and theaters many times since. Over the years I learned a lot about the life of performing musicians, touring, clubs where no one pays attention to the music and ones where they pay so much attention that mosh pits form and fights ensue. In the ensuing years as a cartoonist, I’ve done quite a few cartoons inspired by those days. 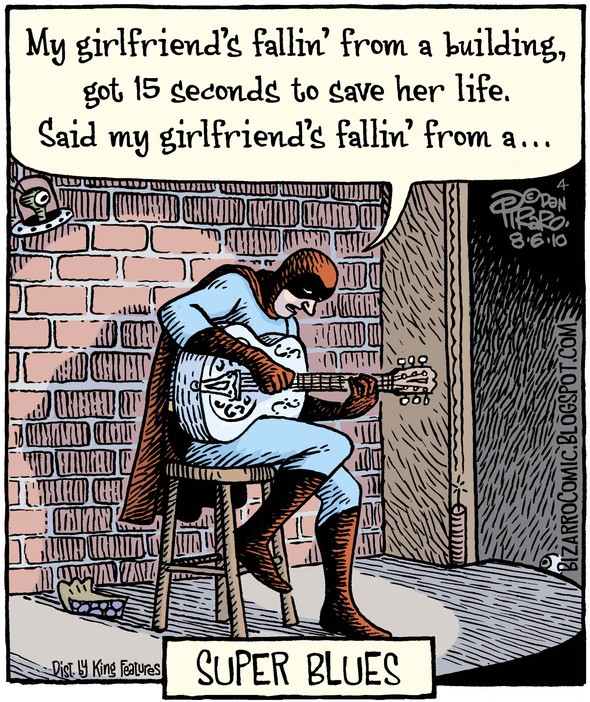 As a teenager in the early 70s, The Who was my favorite band and I got to meet them backstage at their concert in Oklahoma City, the year before Keith Moon died. My best friend (who was also a good artist and the guitarist in our band) and I painted portraits of Pete Townshend (yes, he spells his name with that “h”) and showed them to the guard at the stage door. He went and got somebody, who then went and got somebody, and eventually their road manager let us come back to the green room after the concert to give our portraits to Pete in person. He was incredibly gracious, John Entwistle was cordial but incredibly quiet, Roger Daltrey was friendly and too-cool-for-school, and Keith Moon was literally bouncing off the furniture. It was an amazing experience for a couple of 17-year-old kids.

Over twenty years later I did this “Horton Hears The Who” cartoon. Some years after that, a big fan of mine sent me a pic of a tattoo he’d gotten of my cartoon. From fanboy to fanboy to fanboy, I suppose. 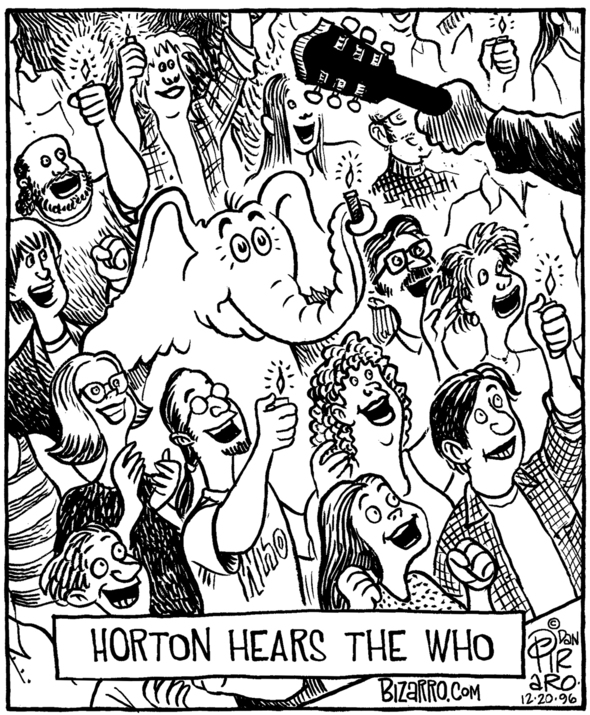 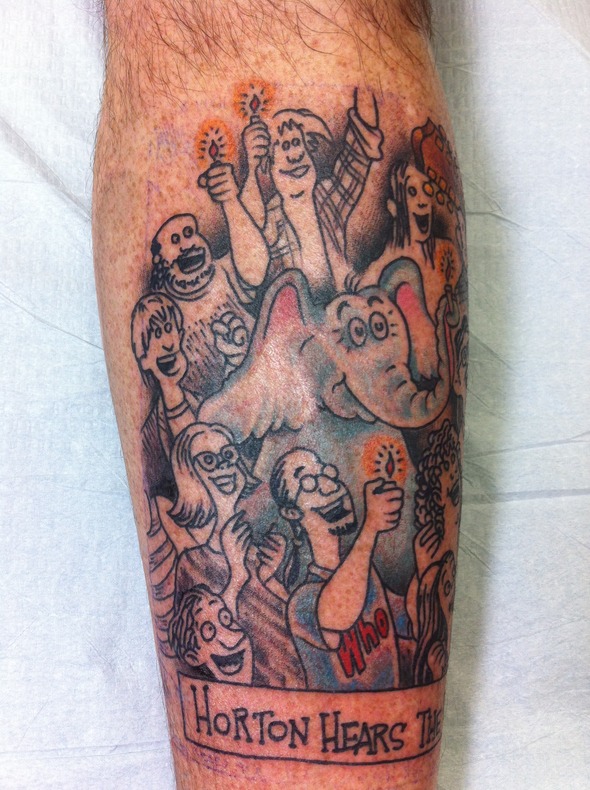 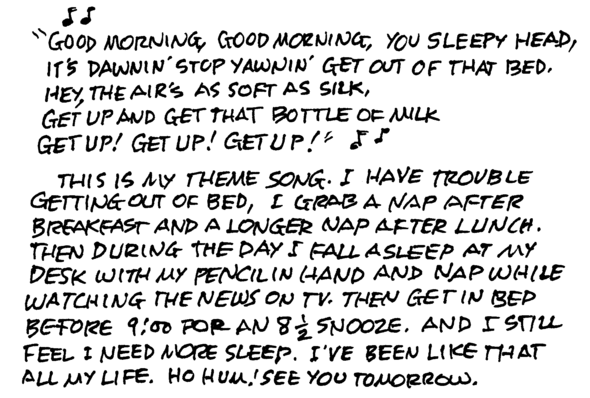 I might be like a lot of people, and songs that I dislike get stuck in my head. That is why I drew this cartoon! 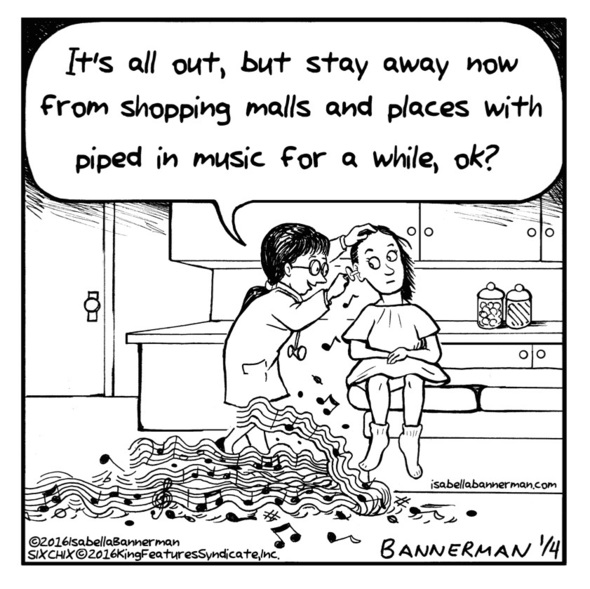 I play the ukulele strictly for relaxation purposes, though I can still hit a few boogie woogie chords on the piano as a result of lessons I was forced to take at the age of seven.
Gotta say, one of my favorites pieces of music is the “Zippy Theme Song”, which arrived completely unexpected one day in the late Eighties.

You can hear it at this link on the Zippy website

Zippy, by the way, is quite proficient at his instrument of choice–the air glockenspiel.

Music is very important in Safe Havens, since one of the major characters is Bambi the internationally famous rock star. You can hear her number one smash “Free Range Love” here: soundcloud.com/susan-holbrook-ridarick/bambi-bramante-day-and-night

Dethany of Fastrack also recorded her Goth anthem “Exhume Yourself”:

Both of these songs were voiced by my sister, Susan Holbrook Ridarick, a professional singer.

I find it interesting that a lot of young people like the music I listened to as a teenager in the 70s. Back then it was known as album oriented rock (AOR), Led Zeppelin, The Stones, The Who, AC/DC were and are still some of my favorites. So it’s fun to play with the idea that Ed and Helen like and know more about the same music that Dustin and Megan might now enjoy as ‘classic rock.’ As for my jones for punk rock, we’ve yet to do anything with that yet… but who knows…

I like most kind of music (I used to play drums in a band called The Ricochet Lemons, but I was terrible), except bagpipe music.

I enjoy many forms of music, but definitely my favorite is country music. I have enjoyed it for as long as I can remember. As the song by Barbara Mandrell says, I was country when country wasn’t cool! Many years ago, I decided it would be fun to have Jughaid have an interest in music and that’s why he is sometimes shown playing the guitar. That has opened up a lot of opportunities for gags with a musical theme. This strip I included is a tribute to some of the wonderful singing cowboys of long ago like Roy Rogers and Gene Autry.

Poor grumpy ol’ George Wilson is a prisoner of his much more joyous musical past. 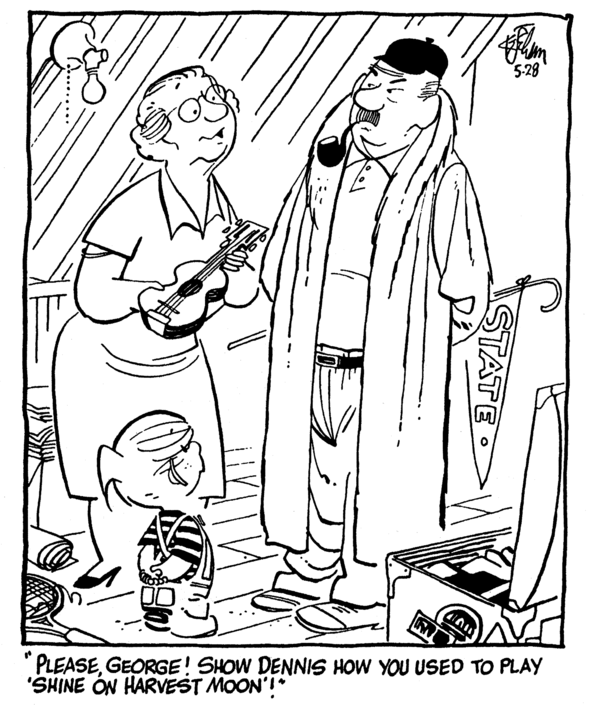 Music is great for getting your energy level up after long bouts at the drawing table.
One of the bands I have on most frequently when I need to recharge are the High Kings. The High Kings are an Irish ballad group made up of four extraordinarily talented Irish singers and songwriters – Finbarr Clancy, Brian Dunphy, Martin Furey and Darren Holden.
Their songs strike a nerve in me because of the stories they tell. And wIth their tight harmonies and ability to play multiple instruments, every performance literally transports you to the Emerald Isle – it’s hard to describe.

During a recent tour to the United States I was able to see them in person – and gave them the following print welcoming them to our fair city. 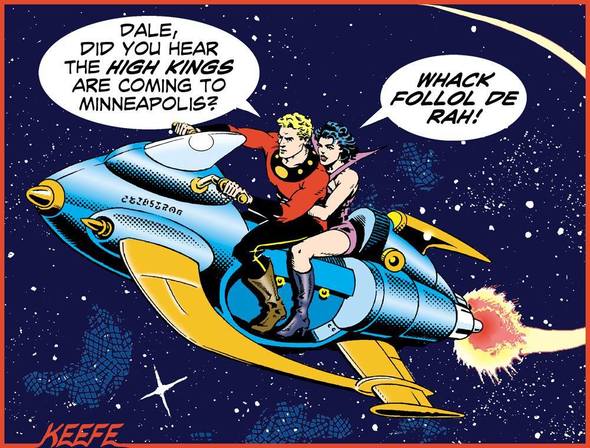 ?
The Tour Manager, Paddy McPoland, was so appreciative that the next time they were in town he invited my wife Deb and I backstage to say hello. 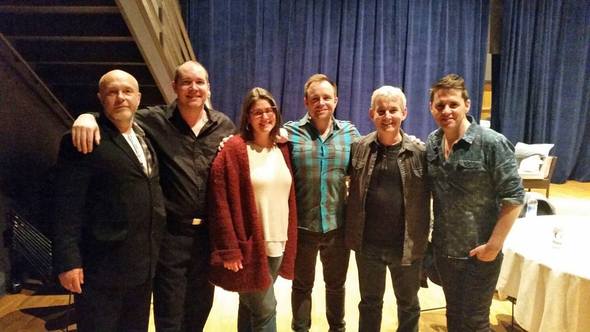 I’ve been able to see them perform live a few times over the years and each performance has been memorable. The last time they were in Minneapolis (in 2016) they even covered Prince’s Purple Rain in tribute – Classic.