Ask A Cartoonist: Words to Live By

We spend a lot of the time focusing on the *pictures* in comics, so today, I thought it would be fun to focus on the words– which are often just as important, and sometimes moreso, than the images that accompany them I asked our cartoonists to talk a little bit about some of their favorite words and the way they use words in their cartooning!

I love the English language and playing with words. Particular favourites include serendipitous, supercilious and surreptitious. And those are just ones I like beginning with “s”.

What I don’t like is when people take a perfectly good word that means “one of a kind” and add unnecessary modifiers to it.

My mom is Italian American, so I’ve always been fascinated by Italian words. I remember as a kid, repeating words, even without knowing what they meant, because I liked the sound they made.

Now that I know what some of them mean, I like to repeat the word cappuccino, because sometimes results in getting something delicious. 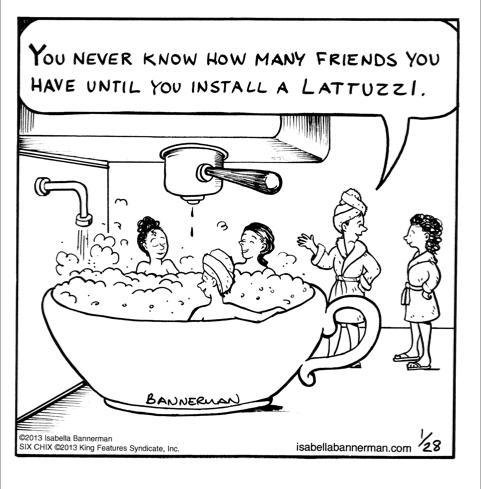 Zippy spouts words like jazz musicians play riffs. One of his favorite wordplay activities is the “over and over”. Zippy fixates on a series of words that just beg to be repeated as pure sound. Readers are always suggesting new ones—here’s what I mean:

In lieu of words to live by, I have words I have to live with. There are two I always have to look up to spell. “Surprise.” Why is there an “R” in the first part?

The other is “Athlete.” (I literally had to look that one up right now to get it right.) Shouldn’t it have another “E” after the “Ath” part?

Since moving to Mexico five months ago, I’ve been spending a lot of time trying to learn Spanish. It’s harder than it looks and I suddenly have enormously new respect for the broken English that my Mexican housekeeper in California had. It will be years before I speak Spanish as well as she does English. Back to the point, my favorite term in Spanish so far is peanut butter, which is “mantequilla de cacahuate”. It doesn’t look fun but it’s hella fun to say out loud. (mahn-tay-kee-ya day kah-kah-wat-tay.) If you practice it enough to say it quickly, it’s hilarious. By the way, there are other ways to say “peanut butter” in Spanish but none are as fun as this one.

Here’s Henry Mitchell boldly standing his ground when it comes to defending one of his favorite words.

As a self-proclaimed, immature man-child, I love words that sound naughty or rude (and make me giggle like a 6-year-old). So it kind of fits that we try to drop one into a strip now and then for “Dustin” (and me) to snicker at.

Due to the strong rural dialect used by the characters in my comic strip, I have a lot of fun with the misspellings of words. But, by far the one word Snuffy uses the most often is BODACIOUS! It is one of my favorite words! I love the sound of that word when I read it out loud and I love the meaning of the word, too. In fact, I love it so much that I put it in the title of my first Snuffy Smith book collection back in 2013. I titled it The Bodacious Best Of Snuffy Smith!

“CRIPES!” It’s a word my Grandmother would use often to express her frustration. It’s Orville’s favorite swear word.