Dennis the Menace has been causing trouble since 1951, when Hank Ketcham’s beloved “five anna half year old” debuted in newspapers.

Ketcham was already know for his panel cartoons and illustrations when Dennis became a household name, and in this 1949 Ladies’ Home Journal comic, you can see the seeds of what might become Dennis just two short years later. 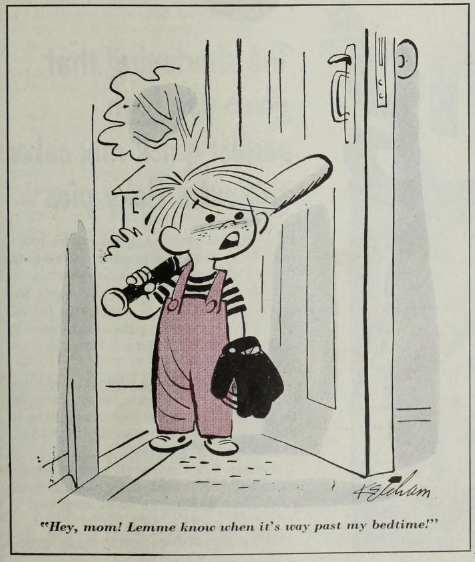 Dennis has had a long and remarkable life for a boy who still can’t tie his shoes, having been the subject of comic books, television shows, movies, toys, and countless other media over the past decades. His iconic red overalls and blond cowlick are recognizable anywhere– and a sure sign that trouble is not far behind.

Dennis lives with his parents, Henry and Alice, and their dog, Ruff, next door to the now-famed and much-beleaguered Mr. Wilson, and his wife, Martha, a retired couple. Mr. Wilson is Dennis’ chief nemesis while Mrs. Wilson is his biggest cheerleader.

He has a group of neighborhood kids for friends, including his best friend and sidekick, Joey, tomboy Gina, and Margaret, the neighborhood know-it-all. And while Dennis may often seem like a handful, he can also be a kind, loving, and precocious little boy.

Now lovingly created by Ron Ferdinand and Marcus Hamilton, who were both hand-selected by Hank Ketcham to be the stewards of his masterpiece, Dennis the Menace is just as charming as always, and has done a remarkable job of staying current– Dennis and his parents have adapted beautifully to life in the 21st century.

You can read Dennis the Menace here on Comics Kingdom

Or you can check out Dennis on his own website here!