Ask A Cartoonist: Drop Everything And Read Day!

Today is Drop Everything and Read Day!

Many cartoonists are VORACIOUS readers– and their tastes span the spectrum! To see what kinds of books inspire your favorite cartoonists, I asked our cartoonists to tell me what they’ve been reading recently.

Here’s a pic of my most recent book purchases. It’s always Drop Everything and Read Day at my house. 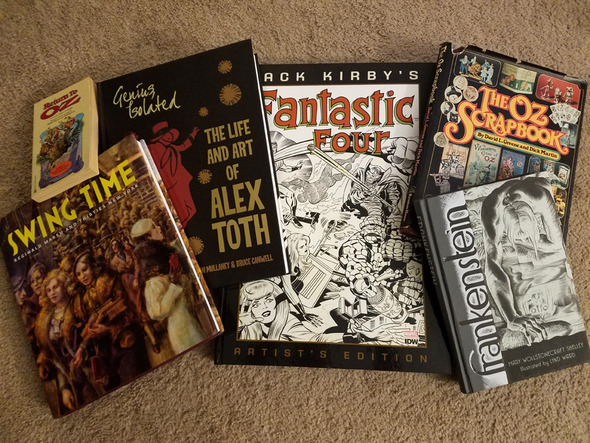 Nightly story time with my kids inspired a recent Rex Morgan sequence in which Rex reads the first L. Frank Baum Oz novel to Sarah. I read ALL of the Baum Oz books to my son one chapter per night. Now reading a batch of Roald Dahl books — just finished “Danny, Champion of the World.” I hope he grows up loving books the way I did.

I’m currently reading “Mary Astor’s Purple Diary” by Edward Sorel. It’s Sorel’s first foray into writing—and it’s a page turner. I’s all about the life and scandal trial of movie star Mary Astor, a heartthrob of Sorel’s since early movie-going childhood. I knew her chiefly from her performance opposite Bogart in “The Maltese Falcon”, so this is a revelation. Profusely and beautifully illustrated by Sorel, of course. He’s always been one of my favorite artists—now he’s one of my favorite writers. 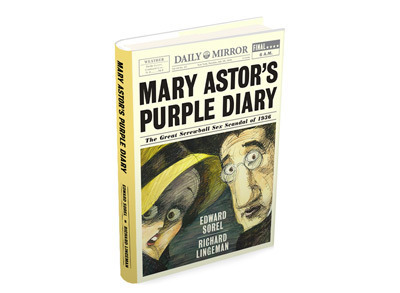 Dethany loves books, and you can guess her favorite author.

Dennis’ babysitter is about to learn firsthand the meaning of John Lennon’s words: “Life is what happens while you’re busy making other plans”. 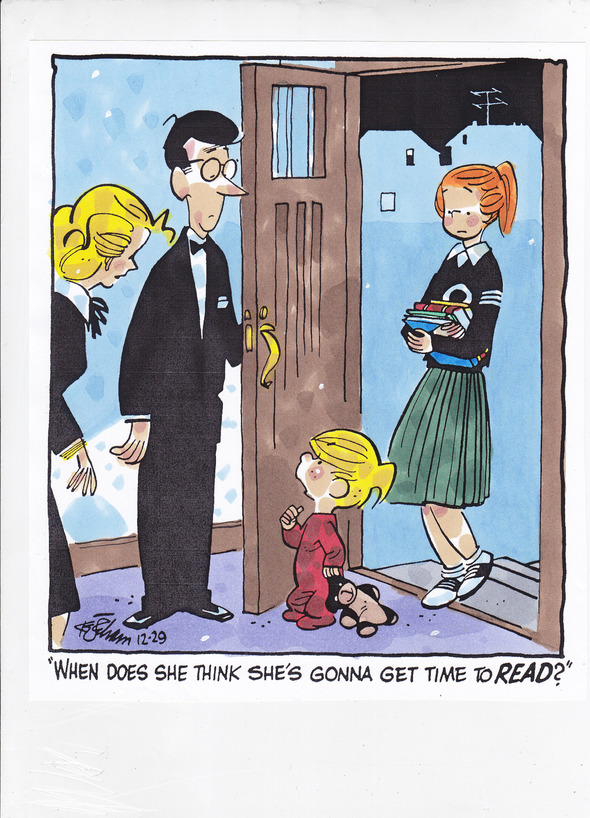 Little Tater loves being read to, even if his Paw, Snuffy, changes the words! Personally, I just finished reading Walt’s People, Volume 4 and will soon begin reading Volume 5. These are a series of wonderful books edited by Didier Ghez which are basically an oral history of all things Disney as told by the artists, animators, engineers and executives who made it happen. I thoroughly enjoy them!

Being in Spain, I thought I should read Cervante’s “Don Quixote” (in English!). It is a SLOG. The titular character is an idiot. But there are a lot of cultural references – tilting at windmills, the tale of Lothario, etc. Still, I’ll be glad to finish and move on to something more rewarding… 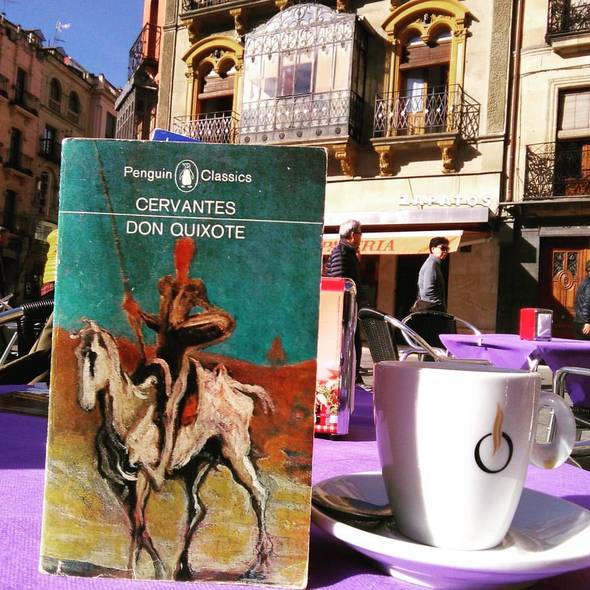 For Hil and her friend Faye it’s graphic novels – lots of Easter Eggs in strips like this for people into comics.

As far as what’s on my nightstand; I currently have “Shiloh” which is a fictional re-creation of the battle of Shiloh in April of 1862 by renowned historian and author, Shelby Foote. I also have “Hellboy: The Descent” by master cartoonist Mike Mignola. 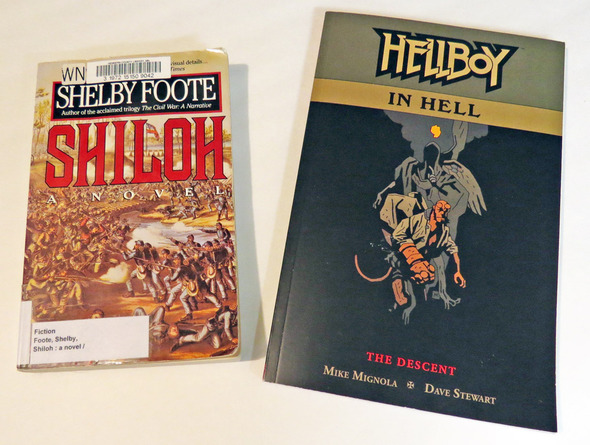 ?
I’ve been working real hard of late to set apart more time to read.
I feel my mind goes stagnant without it.

I’m reading “Forward,” the memoir by soccer phenom Abby Wambach. She talks about her complicated relationship with soccer and her struggles with drugs and alcohol.

“I love a good laugh at the end of the day. My current picks before bed are MAD Magazine and Stephen Colbert’s “I Am America and So Can You”. I’m also working my way through Stephen Hawking’s “A Brief History of Time”. I’ve read this at least a half dozen times, and I’m still learning from it.” 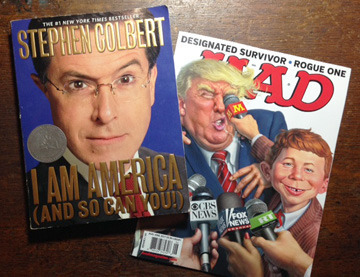 Just last week I finished reading the phenomenally in-depth biography “Thomas Cromwell: The Untold Story of Henry VIII’s Most Faithful Servant.” I have an unnaturally voracious love for all things Tudor England (and most British history), and I could not get enough of this book, as I am also particularly interested in the stories of Thomas Cromwell, Thomas More, Anne Boleyn and the English Reformation (Not to mention the era of Elizabeth I as well, in equal measure.) You could say this is the subject on which I geek out the most. 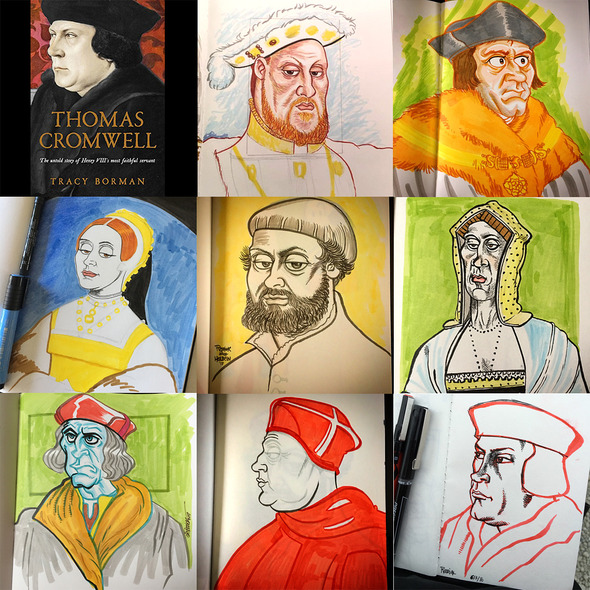 As an aside, I have a penchant for digging a little deeper by way of doodling the people from the Tudor era (as I read about and watch a lot of documentaries about this deeply intriguing time period and its people, most of all, sketching my own cartoon-interpretations of portraits from the era, most notably those of Hans Holbein (the Younger), painter to the English Court of Henry VIII. Sketching these portraits brings me closer to not only Holbein’s immensely detailed and intuitive work, but also to that of the people themselves, giving me some feeling of interacting with history in such a way. (Here is an amalgam of several unfinished sketches, all of which are in progress simultaneously, as I tend to jump around back and forth in my sketchbook a lot.)

I also highly recommend Hilary Mantel’s “Wolf Hall” and “Bring Up the Bodies!”