News Around the Kingdom: A SUPER FAN, A SUPER DO, A PUB & PIX

This week, we are delighted to share a real feel-good story from SNUFFY SMITH cartoonist John Rose. Friends of his sent him a front page story from their local newspaper, the Rome News-Tribune (which happens to be a Snuffy Smith comic strip subscriber).  The story was titled “Fan Identifies With Snuffy,” and it was about a local woman named Sue Davis who has clipped and collected hundreds of her favorite Snuffy Smith comic strips and placed them in a binder for more than 50 years!  You simply must check out John’s blog, read the story from the Georgia newspaper and find out what cool thing happened next… 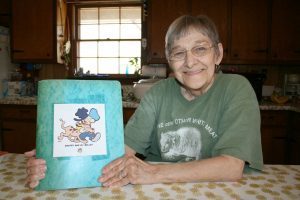 Sue Davis has collected hundreds of Snuffy Smith comic strips in a binder over the past 50-plus years! Photo by Severo Avila/Rome News-Tribune

On a different note, THE PAJAMA DIARIES cartoonist Terri Libenson shares a very personal story as she explains why her protagonist, Jill, has a stunning new haircut in the strip and why the first and only selfie she has ever taken shows Terri with a stunning new haircut, too. Click here to read the poignant backstory to her current series.

Last week, we told you that SIX CHIX cartoonist Anne Gibbons had invited everyone to attend the exhibition of her paintings and cartoons at a local Irish pub during the month of April and a reception this Saturday, April 8. Unfortunately, there was a mixup in the schedule at the pub and the reception has been rescheduled for this SUNDAY, April 9 from 2 to 4 P.M. Fortunately, if you're able to attend, there's another treat in store if you stick around. Whoo-hoo! Drop in if you’re in the area. Here’s the revised invite along with what Anne had to say about it:

"Due to a scheduling error at An Beal Bocht, the reception for my art exhibit has been changed from Saturday to Sunday, April 9th from 2 pm to 4 pm. A traditional Irish music session begins at 4 pm, so if you plan to come to the reception, you might want to stay for that. It’s wonderful.  Apologies for the inconvenience! If you shared the previous announcement with anyone, please forward this one as well. Thank you, and hope to see you on Sunday, April 9th!" 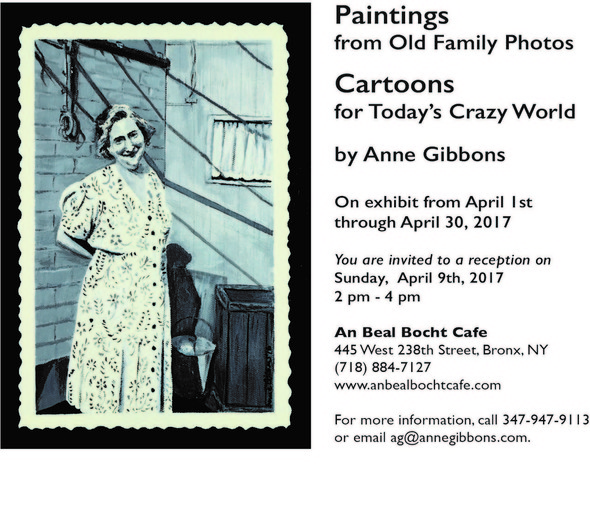 Royal Readers of the Vintage Comics will be particularly saddened to learn this week, as we were, of the death of TIM TYLER'S LUCK cartoonist James R. (Bob) Young.

The tale is told by his family that early on, Bob is credited as the inspiration for comics such as when his uncle observed him vacate the ice box and squeeze everything between two slices of bread and thus the Dagwood sandwich was born.  Later, Bob began having more direct involvement in cartooning, taking on light work on his dad’s Tim Tyler’s Luck strip and then eventually becoming its sole author.

Bob graciously continued to sign his dad’s name to the strip even decades after Lyman stopped working.  Lyman and Bob were that unique group of cartoonists that could not only generate ideas, but draw well. Tim Tyler’s Luck ran for more than 65 years.

Bob was less interested in comics as entertainment than his dad was, and was more drawn to instilling curiosity and concern about the world in his readership.   Under his authorship, Tim Tyler’s Luck became an adventure strip in which the two characters, Tim and Spud, traveled around the world witnessing problems and endeavoring to solve them, problems such as wildlife exploration and rescue, threats to endangered species, the potential of renewable sources of energy, and salt water farming.  He was hoping that his readers would want to learn more and work for the common good.  Bob is survived by his wife, Michaeleen (Mike) and sons Lyman, Bruce and Matt.

RIP, Bob, and our sincere condolences to your family.

Returning to the discussion at hand – the art of cartooning -- Brian Walker continues his walk down Memory Lane in this week’s BEETLE BAILEY Timeline 1962 – Part 3 with a look at a rare graphic depiction in the strip: a night scene. To check out all the nuances in this Sunday page, click here. 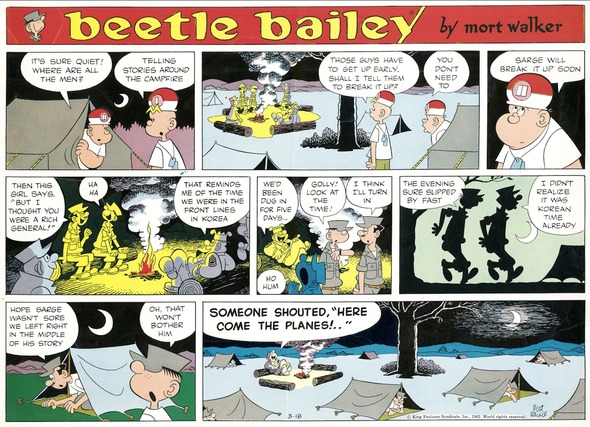 In HI AND LOIS, Brian focuses on the wonderful artistic work that Dik Browne exhibited in the Sunday pages, this time, as the family visits the Zoo. Read all about it here! 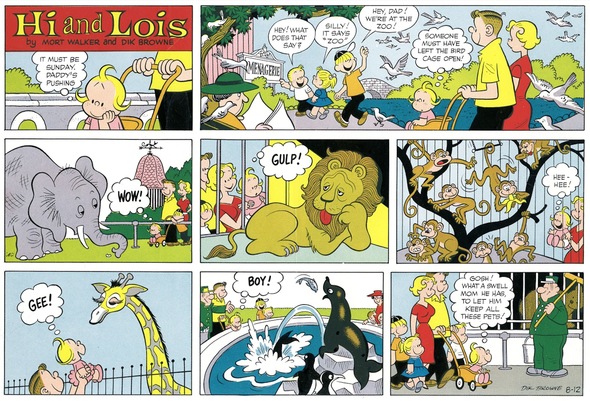 And finally, in this week’s BIZARRO blog, Dan Piraro not only provides his usual tons of hilarious cartoons, but gives a long, thoughtful essay on one of his cartoons (see below) that provoked reaction from both sides of the political spectrum. Check out his blog and see why. 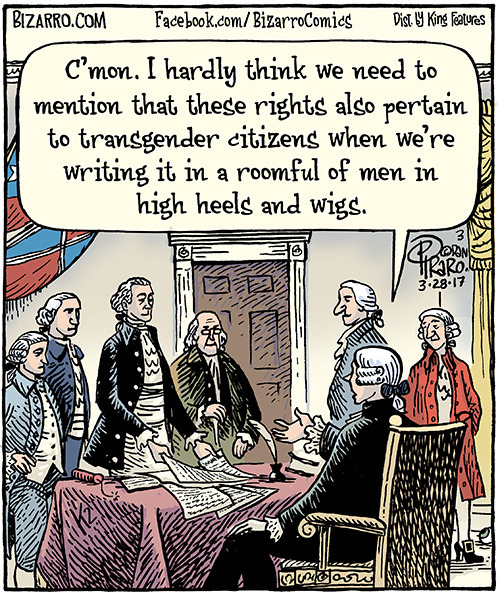