Ask A Cartoonist: How Do You Draw?

This question comes from Kevin, AKA @cambridge73 on Twitter, who asked us to find out how some of his favorite comic strips are drawn. I asked all of our cartoonists if they wouldn’t mind telling me more about how they draw their comics– and here are the answers!

Hello! I just put a few of my supplies on the scanner, and I’m sorry that they are blurry, but I can tell you that once I am happy with the hand drawn black and white, that I scan it, and then clean it up and color it in photoshop. I’m looking forward to learning how to use a stylus – hopefully next month. 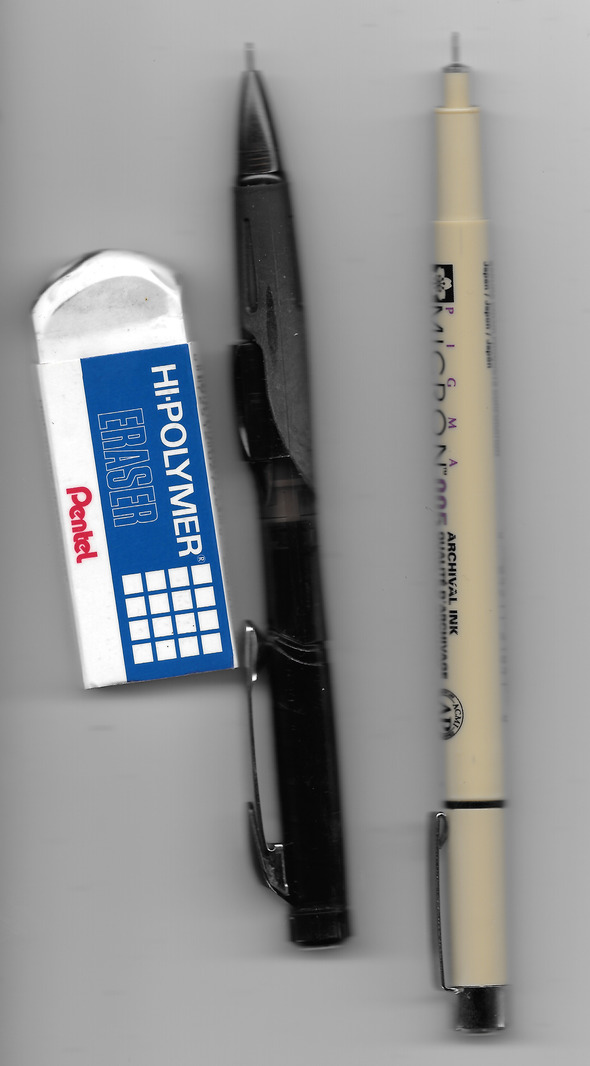 The only thing I use my computer for is in coloring (Photoshop). For my Zippy strips, I use Bombay Black ink with a Hunt’s 100 nib on 2- ply plate Strathmore paper.
I do everything by hand, including all the lettering. Digital, schmigital.

Bill Holbrook, On the Fastrack:

I put tracing vellum over a lined template to hand-letter the dialog; very old-school. Then I place the vellum over my pencil sketches, and ink with a #0 Rapidograph pen and an Osmoroid cartridge pen. The strips are drawn at 13 inches by 3 and three fourths inches. I scan them at 600 dpi and do clean-up and the shading with Photoshop.

I draw Arctic Circle using very old school dip pen and Indian ink on heavyweight cartridge. I draw quite small, fitting two daily strips on an A4 (roughly US letter) sized piece of paper. Then I scan, tidy up and colour in Photoshop. For my other work, I’ve switched to using a fountain pen, Noodlers bulletproof black ink and layout paper so that I can trace over pencil roughs and not have to erase. I hate erasing.

I create the Snuffy Smith comic strip each day in a very traditional way, for the most part. Once I have the gag, I do some experimental rough sketches and layouts. Once I decide on the rough sketch I like, I draw out and letter the strip in pencil. Then I enlarge the pencil sketch on my copier to 4″x 14″. The copier really darkens up my pencil lines. Next, I take this copy and put it on my light table. I place smooth bristol board paper on top of the enlarged copy of my pencil drawing and ink and letter the image. I use Higgins Magic Black India Ink, a brush and Pigma Micron Pens in a variety of point sizes. I scan each strip in the computer, clean it up in Photoshop and email it to King Features each week. I use the same process to create a Sunday Page, but it is just larger in size. The photo shows a panel of an older strip in progress on my drawing table that I have owned since I was in college! 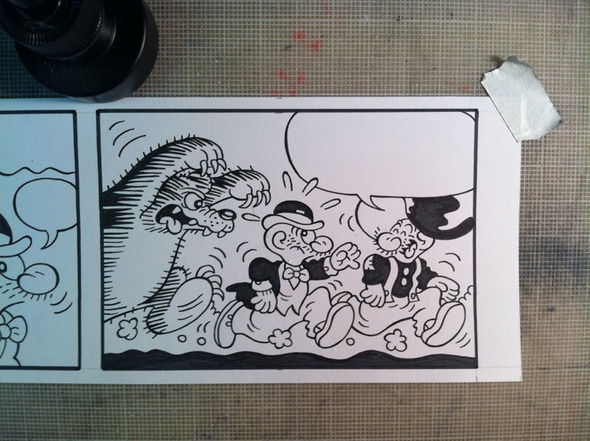 Some quick advice about using reference when drawing.

The following comic strip needed a shot of the exterior of a plane in flight early in the morning.
I came up with some good reference by Googling “airplane” and “sunrise.” 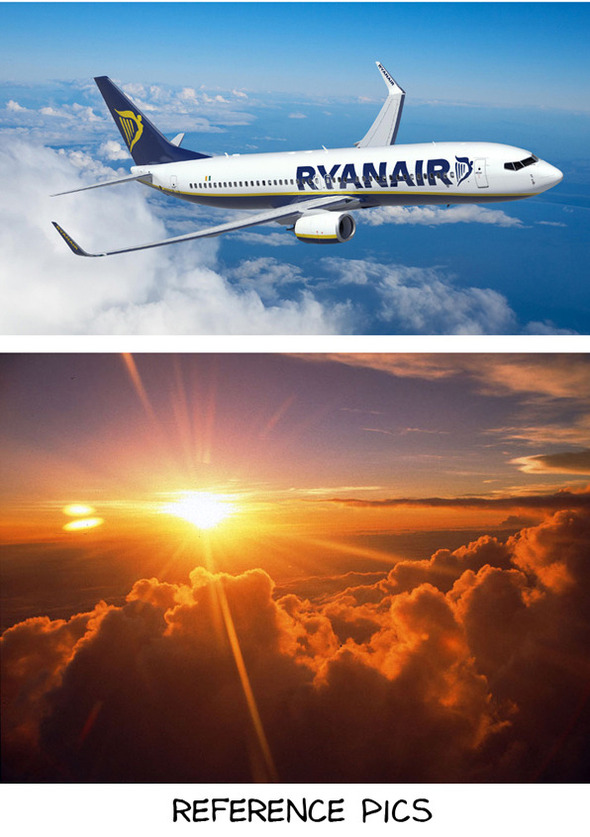 And here’s the finished drawing followed by the full strip. 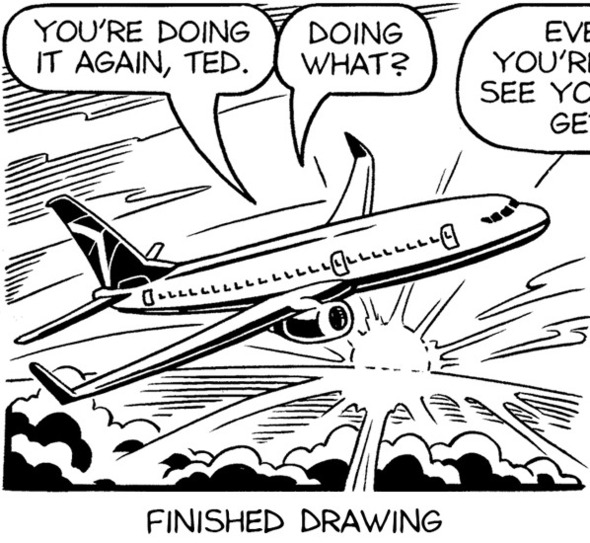 A couple of tips:

Never use the first image that pops up in your search just for expediency’s sake. Take the time to find the image that best works for your layout. The layout should dictate the reference you use.

I will sometimes place the image right on the layout (in Photoshop), but I never pencil the image verbatim. Doing so makes for a stiff drawing. You should use your reference as a jumping off point for your drawing – translate it and make a drawing that best suits the storytelling.

I did a series of videos where I drew my comic strip. It’s the whole deal. This is the first one.

Here’s a little about the art and production of SHOE (and I’ve attached a short video of a drawing of a typical panel for the strip).

To our knowledge, SHOE was the first syndicated comic strip to be produced digitally, beginning in 1993. In his studio in Flint Hill, Virginia, Jeff MacNelly would draw the art for each panel separately, which he scanned in and transmitted electronically to his assistant, Chris Cassatt in Aspen, Colorado. Chris would assemble each strip in Photoshop on a Mac, putting boxes around the art, then drop in text, balloons and stems and finally, the color. In 1999, Jeff transitioned to drawing on a Wacom tablet, eliminating the need for traditional drawing materials completely. I also had been drawing and coloring editorial cartoons and “Pluggers” as well on a Wacom (beginning around 1994), so when I was brought on to draw later that year, I was up to speed with the process.

Our method of working together “cross country” (I’m in Richmond, Virginia) continued after Jeff’s death in 2000, until 2013, when Chris Cassatt also passed away. After that, I did all art production myself for a couple of years until we brought cartoonist Ben Lansing in to help out with color and production.

Several months ago, I changed my method of drawing a bit … I now draw directly into an iPad Pro (12″) using an Apple Pencil in a fabulous drawing app called Procreate. I begin with a layer I name “pencil” and I use a pencil sketching tool to draw a rough. Then, in another layer, I “ink” the drawing in black line, then delete the pencil rough. The digital drawing is then exported to a Mac to be finished and sent to King Features for distribution to client newspapers.

Some folks lament the lack of “originals,” ink on bristol board … but I don’t miss them at all, cluttering up drawers and shelves in my studio … nor do I miss ink spills on the floor and ink stained fingers and sleeves!

“I like drawing both traditionally and digitally. For Tina’s Groove (and Six Chix), I’ve drawn with a Cintiq Companion Wacom Tablet for the past 2 years. I like the Companion because you draw right on the touchscreen, like a giant iPad. For a lot of other comics– including my work on the book Quirky Quarks (a science book that I co-authored) I used brushes, dip pens, paper, and ink. There are times when I switch back and forth, depending on the project. For instance, I’ll do sketches and brainstorming with paper and pencil, and then import the images in to my tablet for the final drawing, and/or coloring.”