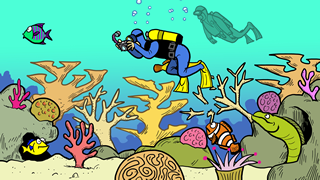 Today is Earth Day when events are held to demonstrate support for environmental protection!  It’s an annual event that's celebrated in more than 193 countries each year!

The United Nations Environment Programme (UNEP) and Jim Toomey (“Sherman’s Lagoon”) have collaborated with Reef-World Foundation to produce a new video on sustainable dive tourism as part of the popular “Two Minutes on Oceans with Jim Toomey” video series!

Jim Toomey has a new video!

The video, “Green Fins for a Blue Planet”, was launched at the Asia Dive Expo (ADEX) in Singapore on April 16, 2016, alongside guidance material on how recreational diving can protect fragile marine biodiversity.  Watch the new video and learn more!

John Rose (“Barney Google and Snuffy Smith”) shows us what could have been!  Book Cover designs for his second book (“Balls of Fire”) that didn’t make the cut!  You can buy his new book from Amazon or Lulu.com!  “Balls of Fire!”  is currently the Number 1 bestseller this week on Lulu.com in their Comics and Graphic Novels category!

A cover that didn't make the cut!

Tom Batiuk (“Funky Winkerbean”) will be signing books tomorrow, Saturday, April 23 from 10:00 AM – 4:30 PM at the Ohioanna Book Festival in Columbus, Ohio!  If you’re in the area, be there or be square!  The event takes place in the Sheraton Columbus Hotel at Capitol Square!

The worlds of Beetle and Hi and Lois converge!

There’s a new collection of classic cartoons from “The Lockhorns” now available on Amazon!

The new Lockhorns book is available on Amazon!

Votes were tallied in the Vintage Madness competition and "Jungle Jim" won!  Be on the lookout because this classic comic will be added to the Vintage section later this Spring!

Saturday “Six Chix” cartoonist Stephanie Piro sells handmade “Phantom of the Opera” jewelry!  Can you hear the music of the night?

David Reddick (“Intelligent Life”) likes to have fun at conventions!

Bizarro is by Dan PIraro!