It’s Summertime and people are going on trips and visiting places.  Why not see some of your favorite cartoonists?

Tom Batiuk (“Crankshaft”) will be appearing in Toledo, Ohio on July 29 at 7:30pm!  “Crankshaft” artist Chuck Ayers will be there too!  You can see them at Fifth Third Field, 406 Washington Street, Toledo, Ohio  43604 for the Toledo Mud Hens – Crankshaft Jersey Retirement and Crankshaft Bobblehead Giveaway!  Plan your attendance at the event today!

John Rose (“Barney Google and Snuffy Smith”) will be a guest at Rob-Con in Bristol, Tennessee on July 30-31!  See him at his table and he’ll sign copies of his new book collection “Balls of Fire!  More Snuffy Smith Comics!”  He’ll also have his first collection, “The Bodacious Best of Snuffy Smith”!  Rob-Con is the Tri-Cites largest comic book convention taking place in Viking Hall from 9:00am-5:30pm!  (The Tri-Cities include Bristol, Kingsport, and Johnson City, Tennessee).  Be there for a bodacious good time! 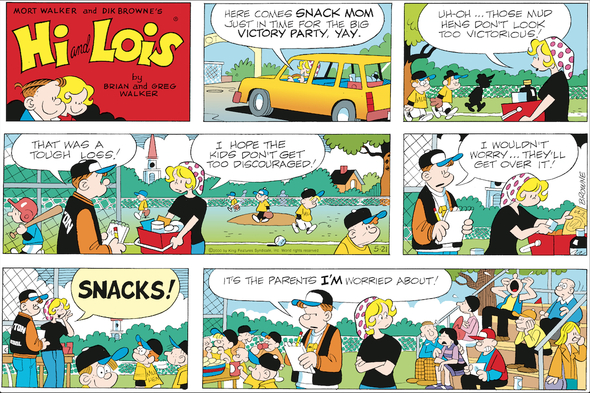 Brian also looks at “Beetle Bailey” back in 1965!  You can get a complete year of the feature’s 1965 daily and Sunday comic strips through Amazon!

Jim Keefe (“Sally Forth”) gives readers a peek at an upcoming Sunday on his drawing board!

Terri Libenson (“Pajama Diaries”) reveals how much her real life is reflected in her strip!

Jeff Parker (“Dustin”) sneaks his love of “Dr. Who” into hidden gems throughout his strip from time to time!