Sometimes a popular culture figure captures the world’s attention enough to make a whole year their own, like the Beatles in 1964, or Hopalong Cassidy in 1950. They generated tsunamis of licensing properties complete with radio, TV and movie deals and  even comic strips. The first such celebrity was Charles Spencer Chaplin (1889-1977), the beloved “Little Tramp” of the movies.  Chaplin is arguably the first real international superstar; his films and fame literally spread worldwide in an amazingly short period of time. His first film working for Mack Sennett at the Keystone Studio was KID AUTO RACES AT VENICE, released in February 1914. There, he impressed audiences with his special comic abilities, enough so that when his contract expired, he was lured to the Essanay studio with an unprecedented $1,250 a week and a $10,000 signing bonus starting in 1915.

The well-funded Essanays were among the first Hollywood comedies to offer some sophistication, with more detailed stories and character depth, thanks in major part to Chaplin’s experimentation. Most of America, and the world’s comedy films had heretofore aspired to offer not much more than a whirlwind of fights and chases in the broadest farcical style. Chaplin gave the comedian an emotional range not found in the Sennett-style performers.

He also benefited from a brilliant marketing campaign by Essanay. All of a sudden there were Charlie Chaplin toys and, candy, cigars, dishes, banks, games, etc.  Large volume selling music sheets for silly songs like “When the moon shines over Charlie Chaplin” and “Oh Those Charlie Chaplin Feet!” appeared. The films, including the recycled Keystone product of 1914, were everywhere.

Chaplin impersonators appeared, and other film comedians like Billy West and Billie Ritchie were outright steals – the costume, the waddling walk, the same stories, everything. There was even a female impersonator named Minerva Courtney! In time there were impersonation contests, everyone thought the clothes made the man, I guess. Chaplin himself found he couldn’t convince a Chicago crowd he was he without his makeup, moustache and costume in March, 1916.

Among the licensing products were the comics. In March, 1915, the comic strip “CHARLIE CHAPLIN’S COMIC CAPERS” debuted at the J. Keeley syndicate. Keeley was the owner of the Chicago Herald, and his syndicate was small but highly talented, with artists that included future stars like Frank Willard and Billy DeBeck. (whom we acquired when Hearst bought out the Herald).

Essanay, which was based in the Windy City, approached Keeley for the comic strip portion of the Chaplin campaign.  It went through four artists in its short existence, about one year of new strips and another year or so in secondary distribution. I don’t know if they resented the obvious sales aspect of the whole project. Ad comics were then a pretty alien concept, and Charlie wasn’t a cartoon or trade mark , but an actual human being, so this was an unusual series. 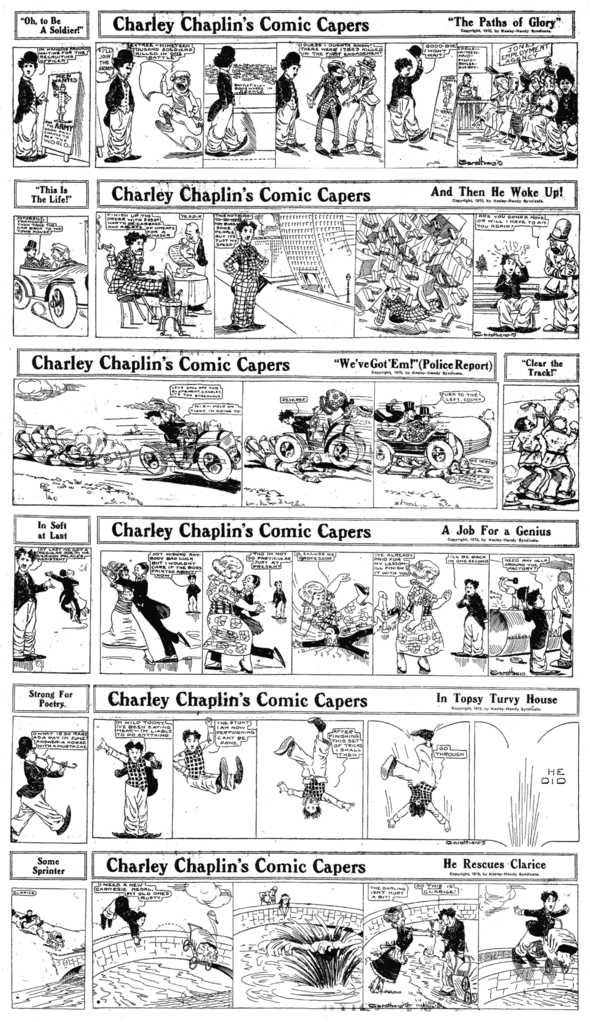 The first man to do it was Herald staffer Stewart Carothers, who had a good, heavily detailed style, and was a real rising star, even doing another Keeley strip, The Movies of Haphazard Helen as well. He had some funny gags and fresh concepts for the strip. He might have gone on to  great things, but he died tragically young, at 22, falling  from  a fifth floor window of the DeJonghe Hotel in Chicago on 4 October 1915. A self-caricature appears in the “Worm Will Turn” strip below. 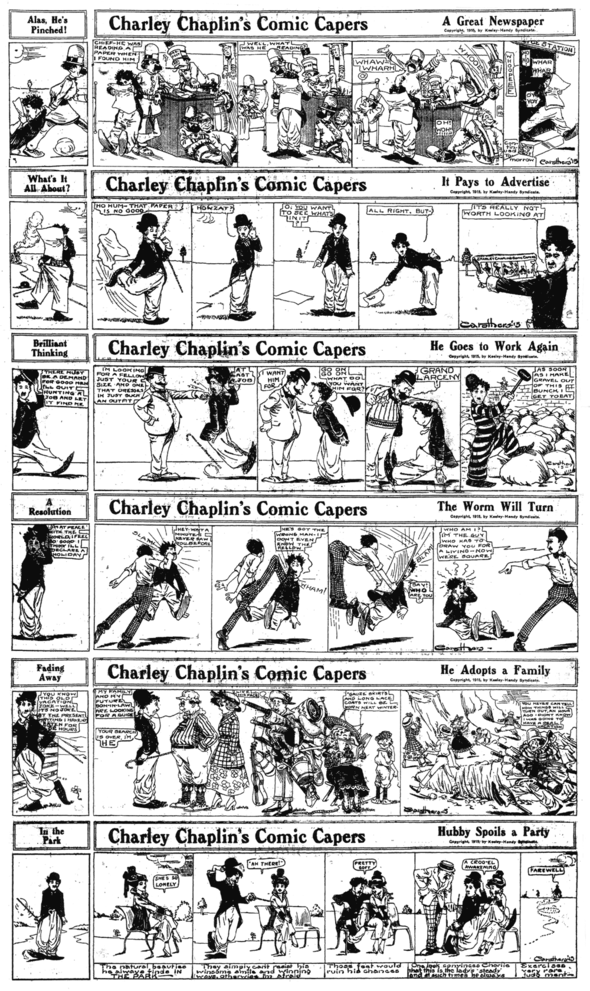 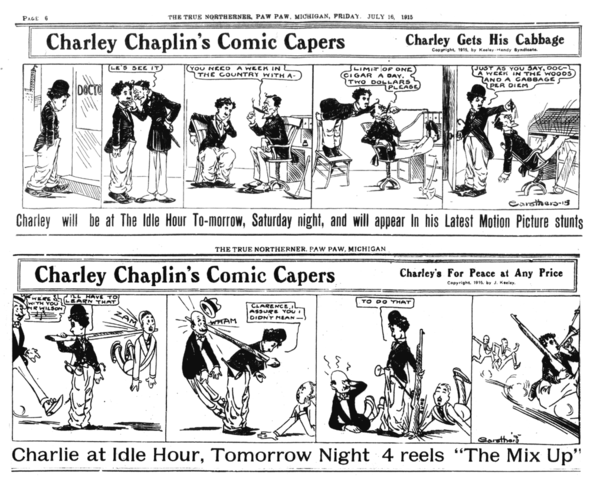 The strips were offered in syndication as having a trash panel to fit some paper’s formats,
usually small-town weeklies. Here, an enterprising editor turns ‘Capers’ into an ad for
the local theatre when a Chaplin picture played.

He was replaced by a nondescript, non-signing pair, one named Warren, the other named Ramsey, and the third to do it was our own Elzie Crisler Segar.  Now I don’t think I’d shock too many familiar with the early Segar to say he was really terrible then. His stuff would be unacceptable anywhere else. He was also in his twenties, but you’d guess he was about five, judging by the strips. In the coming years Segar would endorse a series of cartooning lessons he took, and went on to create Thimble Theatre and Popeye. 1915 was definitely “before.” 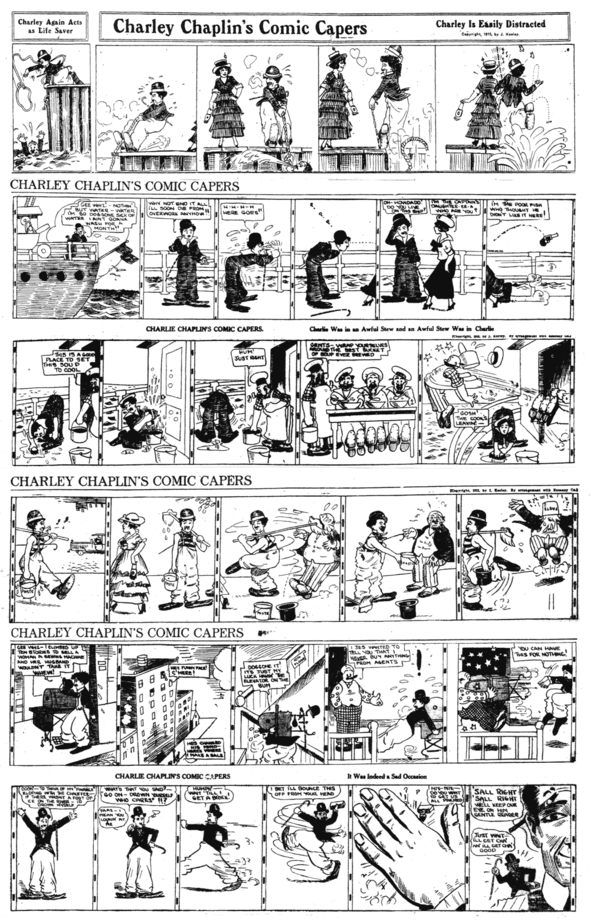 One of the replacement artists includes his face but not his name. The format changed in late 1915, but the “trash panel” size was still offered of the same strips.

Looks like Segar didn’t have the writing skills either. Whereas Carothers and the other two men often took ideas from Chaplin films, especially Essanay ones, Elzie created a midget-sized flunkie for Charlie named “Luke The Gook” to play straight man. Segar really loved dumb set-up-and-knock-em’-down Vaudeville gags. He must have, as he continued this method well into his Thimble Theatre and Five-Fifteen years. Chaplin’s obvious strengths in the movies, and one would think, in a comic strip, would be pantomime humor, so the Abbott and Costello configuration seems like the wrong choice, though he did use some of Charlie’s gags once in a while. 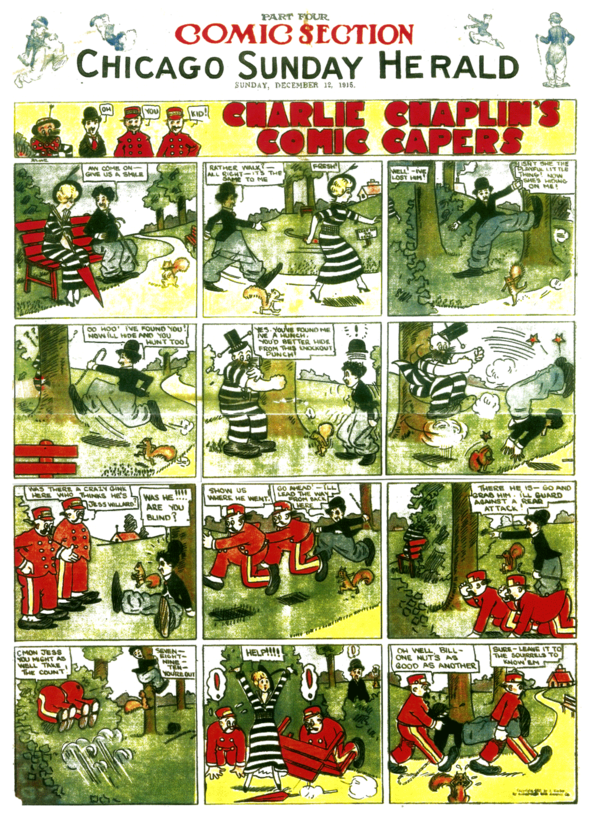 A Sunday episode. Charlie has a violent encounter while stalking in the park.

Keeley seems to stop offering new strips in the summer of 1916, but recycled episodes were still running, boiler plate style, as late as the autumn of 1917. The syndicate, and the Herald itself, transferred to Hearst on 2 May 1918, but by then Chaplin was long gone from Essanay, and his new employer, Mutual, had no interest in comics.

Chaplin comics were far more successful in Great Britain, where his cartoon version frolicked through their comic weeklies like “Funny Wonder”  for decades. 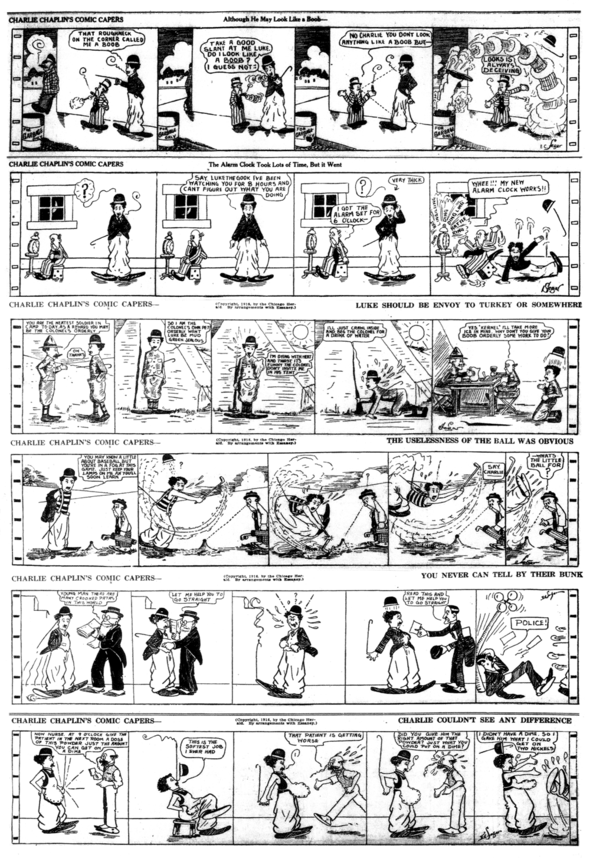 I haven’t heard that we wanted an “Andy Capp”, but that was a pretty hot strip at that time. In the 1980s-90’s we were the US distributor for Andy. Moose is pretty much different from most strip characters, he doesn’t have any interest in being a good husband, provider or father, all he wants are his comforts no matter what it looks like or who’s put out. He’ a character much more believable in 2015 than back in 1965, so  Bob Weber is a man ahead of his time.

“Match Game” was produced by  Goodson-Todman productions, the colossus of game shows. G-T started saving their shows in July 1952, and their archives are indeed considerable, though a lot of thefts over the years have severely cut into early files of What’s My Line and I’ve Got A Secret, as well as many others. The problem with titles like Match Game  is that they produced it for a network, and did not own it. Sure, distribution prints were made for time delay markets like Saskatchewan and Pago Pago, and of course worldwide Armed Forces Radio & Television Service. Trouble is, these prints were almost always destroyed after their use, or sent back to NBC, which would proceed to destroy them on their own. After all, what possible value could a stale bit of utter trivia like a GAME SHOW ever be again? It’s not like you could ever broadcast them in the future. When they stopped making Kinescope versions and started using satellite relays and Video Tape, the tape was valuable because it could be reused. ”Password” was one of the best games TV ever played. Many of the 1960’s examples survive, and all the late 1970’s-early ’80s ones, too, but the several years between were ABC’s property, not Goodson-Todman’s, and now there are two and a half  left. Every other one was “Wiped,” as they say.

In a way, our TV past reproduced the mentality of earlier generations when it came to film. Why would anyone care about the crude efforts of yesterday? When talkies came in, what good were silent films ever to be again? The Hollywood studios flushed their vaults. Now something like only 20% of pre- 1930 American film survives. If you have kinescopes, save them. The seemingly unimportant junk then—games, soap operas, kid shows, almost any local stuff—is now virtually gone without a trace.

Apartment 3-G is something I’d enjoy getting out there, but alas, our archives are vastly incomplete. When we took over NAS, we found they were less than meticulous about keeping back files of their old strips, so, we only have about the last twenty years.

We can’t do anything with “New Breed” because the individual artists have claim to the cartoons.