Parody as a creative device has been used in comics since the early days of cartooning. Some would say parody is the sincerest form of flattery, especially when it is done with respect and appreciation of the subject involved. This was the case in the recent MARVIN series that featured a funny guest appearance by a popular TV personality and familiar-looking chef called “Guy Fries.”

Cartoonist Tom Armstrong did a nine-day series loosely based on celebrity chef Guy Fieri, who stars in “DINERS, DRIVE-INS AND DIVES” on the Food Network. The “Guy Fries” storyline was so well received that it prompted a call between Tom and Guy Fieri, who positively loved being the subject of a spoof cameo in MARVIN. Guy told Tom, “I got a kick out of seeing myself in a comic strip. I nearly fell off the chair when I saw it,” he said. “Being in MARVIN was, honestly, a milestone in my career.”

Is there any downside to being parodied in a comic? If there is, Guy Fieri can think of only one. He has a feeling his new nickname, “Guy Fries,” will stick with his close-knit, prank-loving TV crew.

Below are links to the entire MARVIN and “Guy Fries” comic series.

Other cartoonists who regularly make celebrity references in their comics include Dan Piraro (BIZARRO) and Bruce Tinsley (MALLARD FILLMORE).

Not so long ago, Dan Piraro drew Jeff Dunham in a BIZARRO comic, and he received an email from the stand-up comedian and ventriloquist who admitted to being a big fan of BIZARRO. 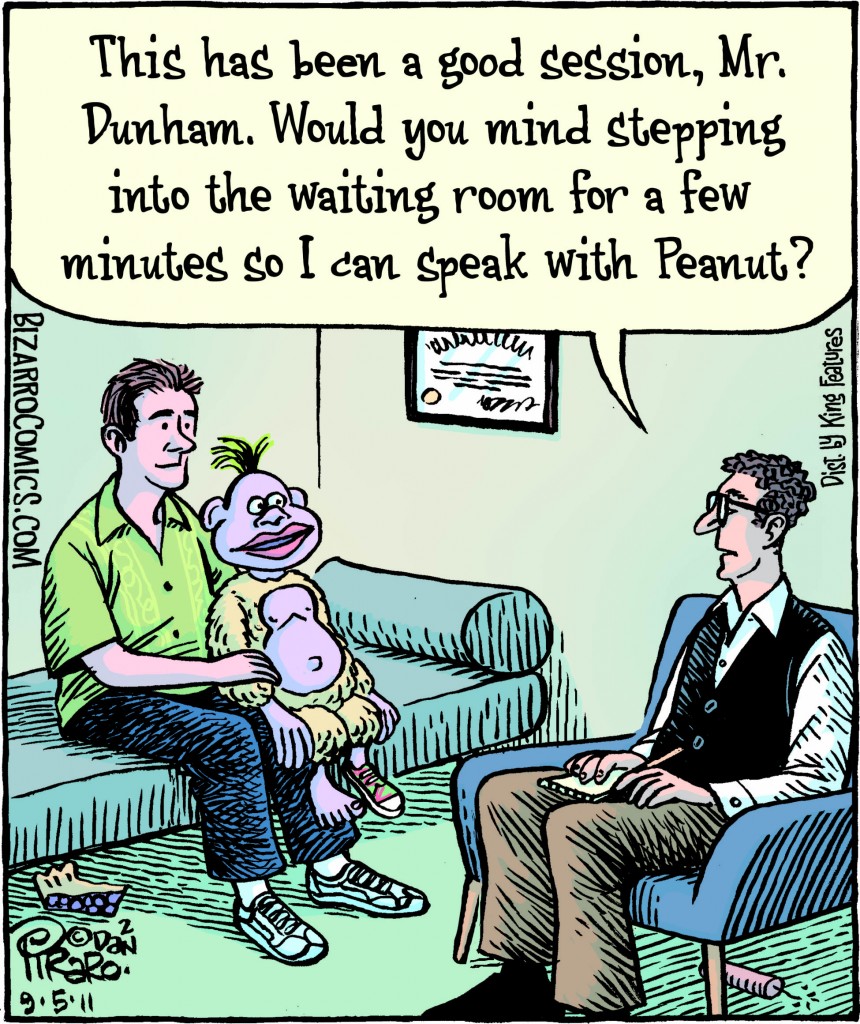 Bruce Tinsley was labeled a “patriot” by FOX NEWS anchor Bill O’Reilly after the host of “THE O’REILLY FACTOR” made several guest appearances in MALLARD FILLMORE.

Here’s what Mr. O’Reilly had to say about Bruce Tinsley:

“From time to time I, your humble correspondent, am the subject of a comic strip. And here’s Mallard Fillmore today, authored by Bruce Tinsley. It says, quote, ‘In our status quo segment tonight, President Obama continues to blame America for bad stuff we never did: colonizing Muslim nations. Late-term abortion fans continue to blame Bill O’Reilly for bad stuff he never did. And those actually responsible for doing bad stuff continue to blame society.’

So true. Mr. Tinsley is a patriot.”

It’s nice to see celebrities who don’t take themselves so seriously and have a good sense of humor when they are mentioned in our comics. It’s even nicer when they admit to being comics fans.

This concludes this week’s Editor’s Dispatch. Have a good week!